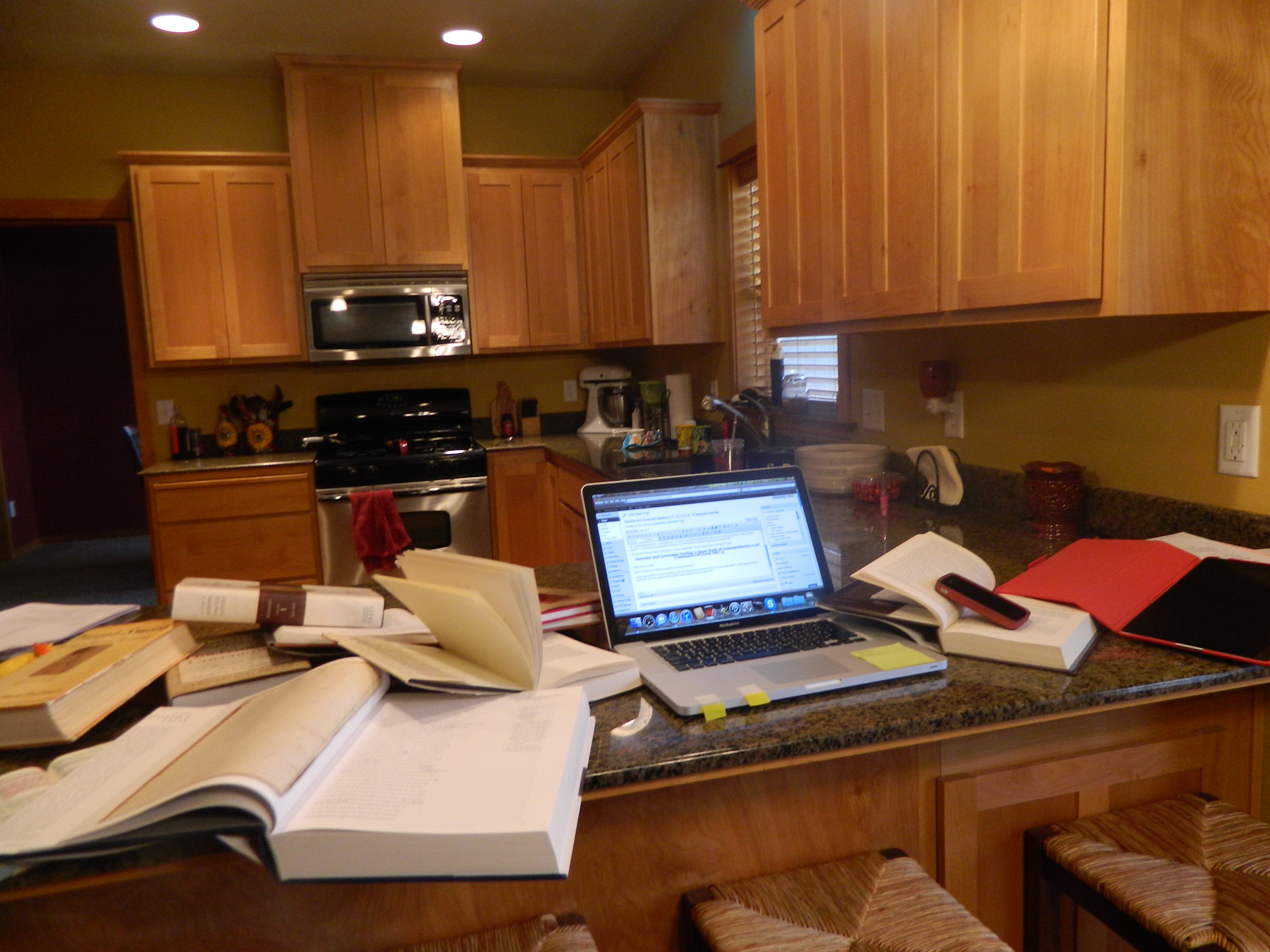 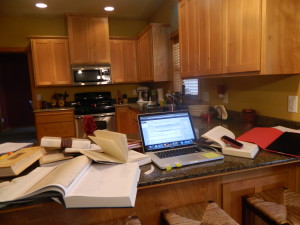 This is what it looked like while I was writing this post. I have a very loving and patient wife.

Most of Joseph’s early revelations were copied and recopied by early Saints that were eager for new revelation.   I attempted to find a scholarly book that would review from which early manuscripts the Revelation Books were compiled.  I wanted to know who were the original scribes as Joseph dictated the original revelations.  I went out into the “Mormon blogosphere” and asked if such a book existed.  I even asked FAIR.   No such book exists.  For most sections of the Doctrine and Covenants, the earliest manuscripts we have come from Revelation Book  1  also know as the “Book of Commandments and Revelations”.  It is a manuscript book of revelations and other items that was begun less than a year after Joseph Smith, Jr. organized the church in 1830.  John Whitmer was the principle scribe.     Below you will find my bibliography of books from which I have written this post and will write future posts.

Publication Note:  Section 2 was first published in the Times and Seasons (April 15, 1842) and was first included in the Doctrine and Covenants in the 1876 edition.

The Smith family had moved from Palmyra to Manchester in 1818.   Joseph was living in his parent’s home in Manchester when this revelation was received.  This would have been the cabin, not the frame house.  The frame house remained unfinished in 1823 so no one would have slept there, unless to relieve congestion.  As the header of our 1980 D&C states, this is “An extract from the words of the angel Moroni to Joseph Smith…”

Doctrine and Covenants Section 3 (from the Book of Commandments (BoC) 2 (cf. Community of Christ (CoC) D&C 3))

Located approximately 150 miles from Palmyra, New York, Harmony was the home of Isaac Hale, Emma Smith’s father.   Because of persecutions in Manchester, New York, Joseph and Emma Smith moved to Harmony about December 1827.

Publication Note:  Section 3 was first published as chapter 2 in the BoC in 1833.

Historical Note:  This revelation was to Joseph Smith, Jr. regarding the lost manuscript of the forepart of the Book of Mormon.   This is Joseph Smith’s first recorded revelation.  The revelation is believed to have been given through the seer stone that Joseph had in his possession (although some maintain that it was received through the Nephite interpreters).  Joseph was twenty-two years old at this time; Martin Harris was forty-five.  Martin Harris had been Joseph’s primary scribe for the Book of Mormon form April 12 -June 14, 1828.  Martin Harris had received permission to take the first parts of the Book of Mormon manuscripts (commonly called the lost 116 pages, although there is historical data to show that there might have been up to 200 pages)  to show his wife and others.  After Harris’ departure, Emma Smith gave birth to a son on June 15, 1828;  the infant died the same day.   After Emma had recovered sufficiently, Joseph left for Manchester to visit family and check on Martin Harris.  Joseph arrived at  his parent’s home in the late evening.   The Smiths invited Harris over for breakfast.  Harris arrived four hours after food had been put out on the breakfast table.  Upon his arrival to the Smith home, Harris said, “I have lost my soul.”

Biographical Note:  Harris was excommunicated in 1837 and rebaptized on November 6, 1842.    After Joseph’s death,  Harris joined the James Strang movement and served a mission for the Strangites in England in 1846.   He joined William E. McLellan in organizing a new church January 1847.  He later joined William Smith in organizing a new church around 1858 in Kirtland.   He served as custodian of the Kirtland Temple.   He later went to Utah, arriving in SLC on August 1870.   He was rebaptized and received endowment September 1870.  Harris died July 9, 1875 in Clarkson, Cache County, Utah.

Date:  Summer 1828.  All editions of section 10 before 1921 gave the date of May 1829.  Although the revelation date has been changed, the revelation has not been moved form where it was placed in earlier editions.   The date change was probably influenced by B.H. Roberts. This revelation was to Joseph Smith, Jr. regarding the alteration of the lost manuscript pages of the forepart of the Book of Mormon.

The “Manuscript History of the Church” for the years 1828-1829 was written by James Mulholand, Joseph’s scribe, in the summer of 1839.  An insert in that section of the history places section 10 immediately after section 3.  Although the May 1829 date of reception for section 10 (contained both in the 1833 and 1835 editions of the D&C) was not altered by Mulholland, his work clearly attests to the 1828 reception of section 10.  The reference to the “wicked man” in vs. 7 probably refers to Harris and thus, suggests an 1828 setting.  The instructions on the manner of proceeding with the translation of the Book of Mormon after the loss of the 116 pages of the manuscript and the temporary withdrawal of the Urim and Thummim and the gold plates in 1828 also suggest an 1828 setting.

Publication note:  Section 10 was first published as chapter 9 of the BoC in 1833.

Historical Note:  After Joseph Smith had received section 3, both the gold plates as well as the Nephite interpreters were taken from him.

Publication Note:  Section 4 was first published as chapter 3 in the BoC in 1833.

Historical Note:  In early 1829, Joseph and Emma received a visit from Joseph’s father, and possibly other members of the Smith family.    This provided an opportunity for the Manchester Smiths to meet the Hales, to learn of the progress of the Book of Mormon translation (Joseph had just received the plates back  [and maybe the Urim and Thummim] on September 22, 1828), and to give moral support to Joseph.  During the visit, section 4 was received for Joseph Smith, Sr..

Commentary:  Personal Traits Added:  BoC 3 is a revelation dated February 1829 for Joseph, Sr.  The 1835 D&C added other virtuous personality traits to what the BoC had.  The added words are:  “faith, virtue, knowledge” and “brotherly kindness, godliness, charity” (see 2 Peter 1:5-7).  At the same time the symbol “&c” was removed for the 1835 D&C.   While this is perhaps a small and seemingly insignificant change, it is not supported by either the BoC or a manuscript in the handwriting of Edward Partridge located in LDS archives.  The manuscript has a small lacuna where a brief background to the revelation was given.   The altered portion of the text is not in the area effected by the hole and can be clearly read.   It is reasonably certain that the additional words would not have been in the revelation of February 1829.  Therefore the earliest text and the shortest text all favor the BoC reading.

Publication Note:  Section 5 was first published as chapter 4 in the BoC in 1833.

Historical Note:  Shortly after the visit of Joseph’s parents in February 1829, Harris came to Harmony, Pennsylvania to see Joseph.  Apparently humbled and repentant for having lost 116 pages of the manuscript, yet desiring to ascertain if Joseph Smith was in possession of the gold plates, Martin Harris sought out the Prophet.   The revelation instructed Joseph to stop translating the Book of Mormon for a time.

Textual Not:  Much of two verses that appeared in the Book of Commandments in 1833 were deleted in 1835 and from subsequent editions of the Doctrine and Covenants.

Commentary:  No Other Gift:  Judgements upon the People of this Generation

Jonathan B. Turner, nearly seven years after the publication of the 1835 D&C, commented on the revelation given in March 1829:

By turning to that same revelation, as it stands on the tenth page of the first edition of the Book of Commandments, published in 1833, before the Prophet saw fully what powers it would be convenient for him to assume in the church, the reader will see that, at the end of the second verse, God commands Smith to pretend to “no other gift” except to translate [the Book of Mormon], and expressly declares that he will “grant [unto] him no other gift.”  Doubtless the Prophet thought this sufficient ant the time.  But, in publishing the second edition, two years after, it was found expedient to add a saving clause or two, so as effectually to annihilate at once the command and the promise, and leave Smith still free to usurp whatever power he pleased.  The second edition is made to read thus. “I have commanded that you should pretend to no other gift”  (save to translate) “until my purpose is fulfilled in this,” ” for I will grant [unto]  you no other gift until it is finished.”   The words  in italics are interpolated in the second edition, but not found in the first….Smith did not see the necessity of correcting the type in ’33, but in ’35 it became apparent.

The tragic eviction of the Saints from Jackson County remained fresh in Joseph’s memory as he prepared the documents for the D&C in 1834-1835.  As Joseph  approached the revision of section 5, he tried to express in milder, more restrained language the essence of the idea he had earlier given regarding God’s promises to the faithful.  The earlier phrasing had been uncompromisingly harsh and could easily have provoked nonmembers.  More than the later revision, it also bitterly denounced the wickedness and the lack of faith of those who reject the gospel message.   It threatened the wicked with utter desolation and destruction.  When comparing the March 1829 text with the 1834-1835 revisions, it becomes clear that Joseph stated essentially the same judgment and promise in 1835 as he recorded earlier.   The later  language, however, is less vindictive, more accommodating to the feelings of outsiders.  In this transition appears a consistent principle:  inspiration occurs within a historical context and is shaped by the setting, just as it exerts its own influence on the newly emerging situation.

Historical Note:  This revelation was given to Joseph Smith, Jr., and Martin Harris when Harris wanted to know if Joseph Smith had in his possession the record of the Nephites.   Harris traveled from Palmyra, New York to Harmony to see the plates.  The heading of the BoC 4 indicates that “Martin desired of the Lord to know whether Joseph had, in his possession the record of the Nephites.”  Harris did not see the plates at this time but was promised he would be one of three witnesses to view the plates. This section is unique in that God speaks to Joseph Smith about Martin Harris, not, as in other revelations, directly and intimately to the inquirer through Joseph.   On Harris wanting a greater witness, see affidavit of Isaac Hale, 20 March 1834, in Susquehanna Register, and Northern Pennsylvania 9 (1 May 1834):1.

Lyndon W. Cook, The Revelations of the Prophet Joseph Smith:  A Historical and Biographical Commentary of the Doctrine and Covenants, Deseret Book, 1985

Richard E. Turley Jr., William W. Slaughter, How We Got the Doctrine and Covenants, Deseret Book, 2012