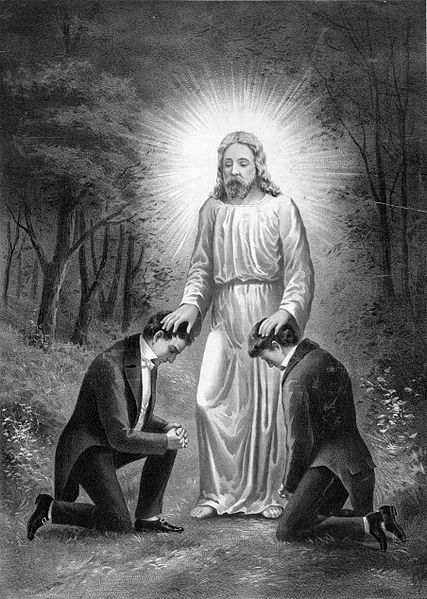 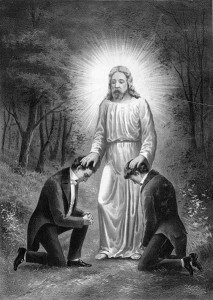 Hyrum Smith arrived in Harmony, Pennsylvania, after Samuel H. Smith’s baptism on 25 May 1829.  Thus, section 11 was of necessity received after that date.

Historical Note:  Shortly after Samuel H. Smith returned to Manchester, New York, Hyrum Smith became interested in Joseph’s activities and traveled to Harmony to visit him.   At Hyrum’s request, Joseph inquired of the Lord through the Urim and Thummim (seer stone?) and received section 11.

Historical Note:  Joseph Knight, Sr., was a resident of Colesville, New York, in 1829, was one of the first individuals to step forward and assist Joseph during the revealing of the Book of Mormon by supplying money, food, and writing materials.   He also paid attorney’s fees for Joseph.

Historical Note:   Section 13 contains part of the instructions and prayer of ordination given by John the Baptist on 15 May 1829.  Several accounts of the restoration of the Aaronic and Melchizedek priesthoods were written and published fewer than six years after the events (see for example, Messenger and Advocate [October 1834].)  Here is a handwritten account of Oliver Cowdery from 1835:

[Joseph Smith] was ordained by the angel John, unto the lesser or Aaronic priesthood, in company  with myself, in the town of Harmon, Susquehannah county, Pennsylvania, on Friday the 15th day of May, 1829:  after which we repaired to the water, even to the Susquehannah river, and were baptized:  he first ministering unto me, and after, I to him.  But before baptism our souls were drawn out in mighty prayer, to know how we might obtain the blessings of baptism and the Holy Spirit according to the order of God, and we diligently sought for the right of the fathers and the authority of the holy Priesthood, and the power to administer in the same;  for we desired to be, followers of righteousness….Therefore we repaired to the woods, even as our father Joseph said we should, that is, to the bush, and called upon the name of the Lord…and while we were in heavenly vision the angel came down and bestowed upon us this priesthood…

It appears that  3 Nephi11:21-30 prompted Joseph and Hyrum to inquire about authority to baptize.  Cowdery said:

After writing the account given of the Savior’s ministry to the remnant of the seed of Jacob, upon this continent, it was as easily seen, that amid the great strife and noise concerning religion, none had authority from God to administer the ordinances of the gospel.

…one morning they sat down to their work, as usual, and the first thing which presented itself through the Urim and Thummim, was a commandment for Joseph and Cowdery to repair to the water, and attend to the ordinance of Baptism (Lucy Mack Smith, Biographical Sketches of Joseph Smith the Prophet and His Progenitors for Many Generations. Loverpool,  England.:  S. W. Richards 1853, pg 131).

The reason this is important is because it gives us an idea of how far along Joseph and Oliver were in their work on the Book of Mormon.

Publication Note:  Section 13 was first published in the Times and Seasons (1 August 1842) and was later included in the 1876 edition of the Doctrine and Covenants.

Lyndon W. Cook, The Revelations of the Prophet Joseph Smith:  A Historical and Biographical Commentary of the Doctrine and Covenants, Deseret Book, 1985

Richard E. Turley Jr., William W. Slaughter, How We Got the Doctrine and Covenants, Deseret Book, 2012