“The Crucible of Doubt” by Fiona and Terryl Givens 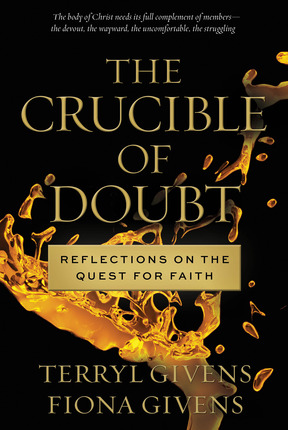 I remember being taught as a young public relations student at BYU-Idaho that one of the keys to dealing with reporters and their probing questions – ever searching for a soundbyte they can lead their story with – is to, instead of finding the best answer to the question, examine and even reject the premise of the question.

I wish I had taken that advice to heart when it came not only to my professional career, but in my spiritual life as well. I’ll get to that later.

The Crucible of Doubt, available now from Deseret Book and on Amazon, does exactly that with some of Mormonism’s most pressing issues that seem to most often cause doubt. In the poetic, graceful and beautiful way that only Fiona and Terryl Givens can, they examine and invite us to examine the paradigms through which we have examined Mormonism.

Like so many of us who roam the halls of the Mormon blogosphere, I’ve had my dark days of faith crisis lately. In fact, just a few months ago, I was on the brink of abandoning my membership in the Church. After corresponding with Terryl via email, he consented as part of a preparation for a Mormon Stories interview to allow me to preview a copy of the book. Its calming effect on my heart in the midst of a wrestle I had been having with God over how to best be my authentic self in a church that seem so different now than the one I grew up in cannot be understated.

Which is all to say that this is clearly not an objective book review, and I make no attempt to treat it as such. Why? Because I am not objective about the book. I consider The Crucible of Doubt to be one of the most important and potentially impactful works produced under the banner of the Church in the last decade.

Consider its publisher. Then consider some of the common and costly paradigms the book directly – and deftly – challenges within its pages:

I’ll admit that I have always been intrinsically drawn to all of the Givenses’ works. Their ability to weave philosophy, literature, non-Mormon religious history and poetry into and out of their writing speaks to my soul with a peace and a purity that I find very rare.

The bottom line is that, no matter the challenges that the book still cannot fully solve, Mormonism needs a book like this right now. This time, this place in history calls for someone standing up and saying, yes, there is a way to make it work, to make it all make sense, if you are open to re-examining some of your own paradigms.

To be open to truth, we must invest in the effort to free ourselves from our own conditioning and expectations. This means we have to pursue any earnest investigation by asking what the philosopher Hans Georg Gadamer calls the “genuine question.” And that is a question that involves openness and risk. As he explains, “our own prejudice is properly brought into play by being put at risk.

The Givenses’ tone within the book is not a “blame the victim” attempt to tell us that we’ve just been viewing the world the wrong way. It’s a poetic invitation to put our view of the world – and thus our biases, our preconceived notions – on the shelf along with all of our doubts and try, just for a moment, to view the world from a different angle. And then, to see if that view doesn’t help make a little more sense of the problematic aspects of Mormonism.

After a period of several months where I found myself on the brink of resigning my membership, the book spurred me to a new and very real desire to make the Church work for me. Why? Because it helped orient me toward a more thoughtful approach to my faith and away from the pain and anger and anguish that were triggered by my faith crisis. Consider this passage from their chapter challenging cultural Mormonism’s view of the role and function of the church:

Lessons and talks are to some Mormons what cafeteria food is to teenagers—not just in the way they can be bland and boring, but in the way that they sometimes bring us together in mutual griping rather than mutual edification. But what if we saw lessons and talks as connections to the sacrament rather than as unrelated secondary activities? What if we saw them as opportunities to bear with one another in all our infirmities and ineptitude? What if we saw the mediocre talk, the overbearing counselor, the lesson read straight from the manual, as a lay member’s equivalent of the widow’s mite? … If that sounds too idealistic, if we insist on imposing a higher standard on our co-worshippers, if we insist on measuring our worship service in terms of what we “get out of” the meeting, then perhaps we have erred in our understanding of worship.

Like a clarion call to give Mormonism another try from a different angle, the book speaks to the type of Mormon who, like me, fundamentally wants to make the Church work, but struggles to see the divine in so much clutter, pain and frustration.

Consider the implications of a book published by the Church that openly acknowledges the faults and foibles of Joseph Smith by smartly pointing out that Joseph put his faults out there in the light for all the world to see, something we rarely acknowledge because we’re too busy singing “Praise to the Man.”

Nor did Joseph Smith claim to be holier than the people he led. On one occasion, he said emphatically, “I do not want you to think I am very righteous, for I am not very righteous.” …To drive home the point, he canonized those scriptures in which he was rebuked for his inconsistency and weakness.

And above all, as the Givenses have been known to emphasize, the book invites us to view belief as not a virtue and a paragon of the righteous, but rather a choice designed to stir the soul. The two equally viable options of belief and disbelief stand suspended before us, and we are free to choose between the two.

We have learned to relish a commitment that is born of faith freely chosen rather than of certainty compelled by evidence. As we have written elsewhere, we believe deeply in the value of faith as a choice. That call to faith is a summons to engage the heart, to attune it to resonate in sympathy with principles and values and ideals that we devoutly hope are true, and that we have reasonable but not certain grounds for believing to be true.

If The Crucible of Doubt is one frequency on some spectrum of hope for Mormonism, I highly recommend anyone struggling with doubt to tune in.