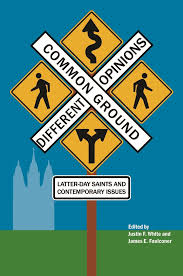 “Common Ground Different Opinions” is a collection of essays dealing with contemporary Latter Day Saint issues. I received my copy of the book shortly after April General Conference. It was a time when raw emotion fueled heated discussions on everything from the ordination of women to fallen prophets. That weekend was for me exhausting and draining. I desperately needed a break from all the noise and was eager to take a break from it all. I picked up my book, shut off all social media and went to my office to read.

I was pleased that the selection of topics was relevant to modern Mormonism. Essays dealing with the nature of Mormon doctrine, homosexuality, feminism, race, and war make up the book. Half way through I found myself thinking with increasing frequency, “I hope this book reaches a wide audience.” I desperately want the average Church member to be exposed to these issues in ways that are unfamiliar and challenging. I was enjoying the uncomfortable emotions that came from being exposed to different thoughts and beliefs. To my knowledge, the issues dealt with in Common Ground have not been settled by the Brethren. There is no official statement or doctrine on any one issue. This allows members to think, ponder and pray as they seek after their own personal truths. Moreover, I hoped members could see that they need not “allow the honest differences we have on these and other issues to disrupt the unity we feel as sisters and brothers in the gospel of Jesus Christ.” (xii) We can take the journey of truth seeking together without belittling those who have chosen to travel paths that are authentic and honest to them even though they may be foreign to us.

As far as individual essays go, I’ve decided not to comment on any one in particular to avoid detracting from the book as a whole — save two. In both content and length, Bruce Young presents one of the most thoughtful and well-reasoned essays on war I’ve ever read. I loved it. More than any other essay, I hope it gets the most circulation. Conversely, Eric A. Eliason’s essay “Why We Fight” was for me, was extremely disheartening. Sadly, I think his ideas will remain dead dogma disguised as doctrine for most of the Saints who share his beliefs.

“I want to be a peacemaker… I acknowledge that others can look at the same evidence and come to different conclusions.”