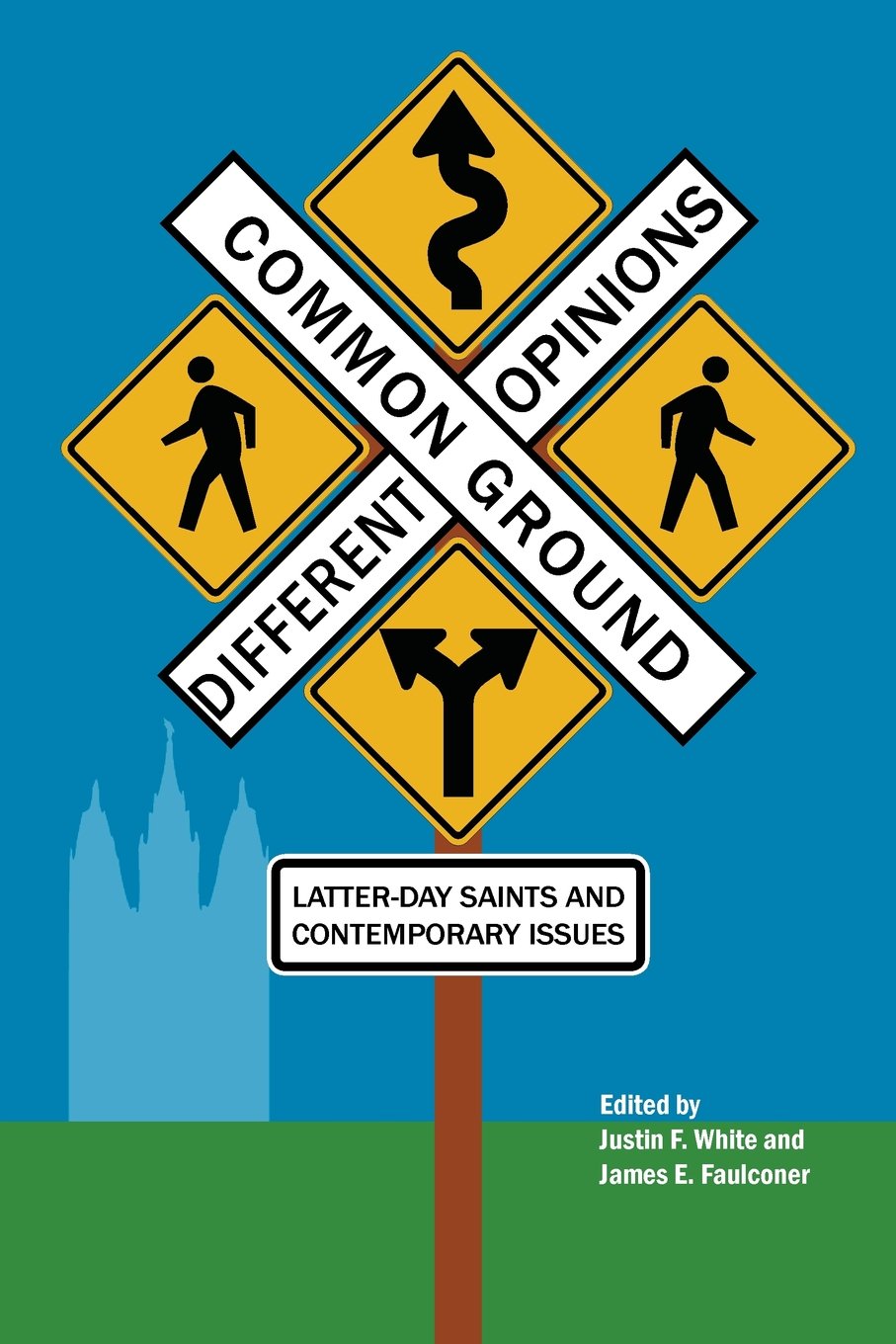 As the LDS Church grows and continues to spread across the world our “common ground” grows in some measure, but we simultaneously encounter a growing body of “different opinions”.  The book “Common Ground, Different Opinions” (CGDO) is an attempt to take our shared doctrinal foundation and explore a variety of different views on current day issues.  As the introduction by Faulconer states, the purpose of the authors is to “offer their writings to you as models for thinking about these issues more than as answers that they are trying to persuade you to accept…it is more important that you understand how a person carefully thinks about issues than it is that you adopt the particular points of view taken by any of the authors.” (pg xi)

The topics covered are varied and interesting: what is church doctrine and gospel paradigms (3 essays), gender roles, priesthood, and feminism (4), same-sex marriage (3), race (1), war (1), politics (2), environmentalism (1), stem cell research (2), and evolution (2).  The argument could be made that this book focuses mainly on American (Western) Mormon issues; yet, many of these issues are becoming more relevant in other parts of the world.  For instance, Brazil and Argentina have now legalized gay marriage. India and the Middle East are in the news consistently for gender/woman equality problems.  Even if all the topics don’t apply across the world in wholecloth, the *approach* modelled in CGDO–informed, spiritually guided thinking, and respectful discourse–will be critical in order to successfully negotiate emerging issues around the globe in the coming years.

The number and scope of topics addressed for a single volume work is ambitious (entire volumes exist that address each individual topic from an LDS perspective).  However, I have not encountered (nor could I imagine) any volume of similar size being more successful than CGDO in capturing the key arguments involved in so many complex issues.  All of the essays are well-reasoned, well-informed, and thoughtful.  The structure is perhaps more loose than similar works: some topics are offered up in pro and con view while others are stand alone. A reader will likely resonate more with one essay’s particular style or tone, but all the essays are laden with valuable perspective.  Given its size, detailed summaries of each essay would be beyond the scope of a book review, so I offer a few short comments on some content.

The first three essays are fascinating explorations into how we think about the Gospel, how doctrine and Gospel paradigms influence our actions, and how we go about defining doctrine.  While admitting that the lines can be blurry at times, Gleave, Millett, and Oman lay the foundation for all the remaining essays in their agreement that differing views may be beneficial in discovering truth and/or doctrine.  Millett and Oman approach the definition of doctrine from fairly different angles, yet they both agree that deciding what is Church Doctrine may take some working out and that doctrine is best represented as a kind of living thing with strong ties to the past and the official declarations of our current prophet leaders.

Petrey discusses how many of our current objections against homosexual marriage stem from our conception of relationships in the afterlife, but that early sealings often dealt in terms of kinship apart from procreation and that this practice has important implications for the possibility of homosexual sealings.  Williams argues an opposing view by warning against the trivialization of sexuality as mere animalistic expression and arguing that we ought to interpret sexuality within a moral context.  His arguments follow the outline of Natural Law philosophy, but they are tailored to an LDS perspective.

Jensen and Cottrell & Peck discuss the ethical dilemmas surrounding embryonic stem-cell research.  While very recent advances in stem-cell research mostly obviate the need for using discarded embryos, these essays are among the most engaging, and they remain timely because the arguments surrounding conception and personhood are equally relevant to issues like cloning and abortion, topics not addressed in any significant way in CGDO.

Bruce Young asks that we carefully weigh the competing principles involved in condoning warfare.  We must balance being “willing to protect our families” with “seek[ing] solutions short of bloodshed” and that we must be more concerned with “inflicting harm than … suffering it”.  While ultimately allowing that battle may be the only alternative, he urges that we find charity for even our enemies.  In a similar vein, and like many of the essays, he urges charity towards those expressing different opinions on the matter.

Finally, Fairbanks and Grandy both reason through some of the challenges with reconciling evolutionary science and some traditional LDS notions of creation.  The two essays approach the topic optimistically, and both emphasize the grandeur and beauty to be found in allowing evolution a leading role in the Creation story.

As it continues to expand around the world, the LDS Church is at once obligated and privileged to both interface with and influence a vast array of racial, cultural, and socio-economic issues.  CGDO offers up a tremendous model for how we can graciously and thoughtfully apply bedrock gospel principles in an effort to solve the knotty problems found in modern life.