CHILD ABUSE AND THE SACRIFICE OF ISAAC 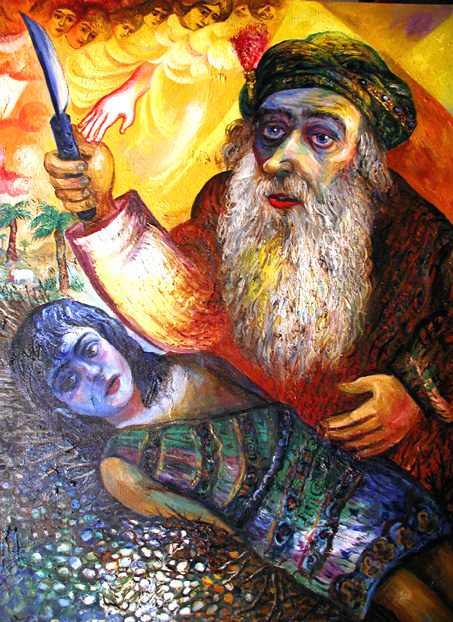 Child Abuse and the Sacrifice of Isaac

As a survivor of childhood abuse, the way we usually teach the story of Abraham is deeply disturbing to me.  Any God that would command someone to harm their child just for the sake of His own worship is not a God I want anything to do with. And is certainly not in line with the loving Heavenly Father that I have a relationship with. The God of Abraham, Isaac, and Jacob is not a God that I know.  He is vengeful and petty and egomaniacal (and he doesn’t seem to care much for his daughters anyway, so I doubt my opinion means much to him.) The Heavenly Father that I know and worship would weep for Isaac, and weep again for Abraham, and weeps for all of us when we believe that this kind of cultish devotion is worthy of children with His divine potential.

If we took this story out of Moriah and placed it in Salt Lake City, Utah, for example, there are few Saints among us who would go to the lengths to defend it that we’ll see in Sunday School. Instead we’d rally behind Isaac just as we rallied behind Elisabeth Smart. We’d campaign for Abraham’s punishment and wring our hands that the pure gospel of Christ had been so distorted. But since it is back in Moriah, instead we’ll try and tell ourselves that there is a lesson here and demand a level of obedience to authority that make all those anti-mormon accusations of “CULT!” hit a little closer to the bone.

I think there is a lesson here, but it’s been hidden in millennia of Christian interpretation that benefits the institution. An organized church benefits from slavishly obedient adherents, not people with the freedom to follow their own personal revelation. That kind of freedom is something we’re so proud of as Mormons, but I think that this story reflects a part of our scripture we’ve ignored, adopting what was already in existence throughout the rest of the Christian world.

In our own scriptures, the first we hear from Abraham is that he realized it was time for him to get away from his family. “In the land of the Chaldeans, at the residence of my fathers, I, Abraham, saw that it was needful for me to obtain another place of residence;” – Abraham 1:1

He goes on to explain that even as a young man he was drawn to the gospel and longed to hold the priesthood, but his fathers had abandoned the faith to worship the gods of the Pharaoh. And instead of conferring upon him the priesthood of their fathers, they delivered him to the priests of Elkenah.

“And it came to pass that the priests laid violence upon me, that they might slay me also, as they did those virgins upon this altar; and that you may have a knowledge of this altar, I will refer you to the representation at the commencement of this record.” – Abraham 1:12

Today we would call what Abraham suffered at the hands of his father Ritual Abuse. This is the kind of abuse that is common in cults and fundamentalist religions – ceremonies that are used to terrorize, punish, or harm. Abraham was an abused child and knew he needed rescue even before he found himself on that altar.

“And as they lifted up their hands upon me, that they might offer me up and take away my life, behold, I lifted up my voice unto the Lord my God, and the Lord hearkened and heard, and he filled me with the vision of the Almighty, and the angel of his presence stood by me, and immediately unloosed my bands;

And his voice was unto me: Abraham, Abraham, behold, my name is Jehovah, and I have heard thee, and have come down to deliver thee, and to take thee away from thy father’s house, and from all thy kinsfolk, into a strange land which thou knowest not of;

In the moment of his deepest danger, Abraham prayed and was answered. Jehovah – Jesus Christ – saved him and “delivered” him to a safe location where he would be surrounded by those with the authority to give him the priesthood he longed for.

If we read this section with the tools of literature, I think it’s interesting that the sacrifice was intended to take place at Potiphar’s Hill.  Later we will hear that name again, Potiphar’s wife being the attempted rapist who attacked Joseph of Egypt, who himself famously “fled and got him out.” There is a cycle here.

The years go on and one day, as an adult, Abraham is commanded to make an offering of his grown son.

“And it came to pass after these things, that God did tempt Abraham, and said unto him, Abraham: and he said, Behold, here I am.

And he said, Take now thy son, thine only son Isaac, whom thou lovest, and get thee into the land of Moriah; and offer him there for a burnt offering upon one of the mountains which I will tell thee of.” – Genesis 22:1-2

The account in Genesis goes on to tell of Abraham proceeding as if he’s going to kill his own son in just the same manner that his own father threatened him. But because it’s to the “right” God, it is somehow a virtuous example of obedience. If Abraham’s father was telling this story, he’d be railing at his son’s hypocrisy.  Isaac’s life is spared in the end because an angel stops Abraham’s hand and a ram is used as sacrifice instead, God praising Abraham for being willing to kill his own child in the name of God.

These two stories do not match up to me. Someone who had been so traumatized by the actions of their father , had a miracle save their life, and ran from home and family for their own safety would not willingly repeat those actions on their own son. I think that this story suffers from the politics and mistranslations and fog of time that account for the King James version of the bible. The “plain and precious things” that have been removed.

I think a Mormon midrash needs to be undertaken to get to the beauty of this story, and to discover what makes Abraham noble. Let me tell you this story a different way.

After Abraham leaves Chaldea, he settles down in Canaan and marries Sariah. God promises Abraham that for his dedication and devotion he will have blessings innumerable. He will have children and more children and his name will be honored for generations. And then time goes on and on and on and there are no children. Abraham and Sarah struggle through famines, and threats and still no children. Eventually Abraham has a child with Hagar, but the relationship is never an easy or happy one.

Finally, in their old age, Sarah and Abraham have the child they were promised – the child that will receive every promised blessing. So they cast out Hagar and Ishmael. Abraham abandons his eldest son.

It is here where Abraham gets the “temptation” to sacrifice Isaac. Or, as the footnote explains, God “tests” Abraham.

None of us can help but parent the way we’ve seen it done. We hear our parent’s voices coming out of our mouths, we cook and clean and set rules in the way that it was done for us. And for those of us who had destructive parents, it is a moment to moment challenge to overcome those patterns and break the cycle of abuse.

And Abraham passed the test. Because in that moment where he was most “tempted” to sacrifice his son in the way that he had been threatened by his own father, he heard an angelic voice calling to his better nature.

“And Abraham lifted up his eyes, and looked, and behold behind him a ram caught in a thicket by his horns: and Abraham went and took the ram, and offered him up for a burnt offering in the stead of his son.”  – Genesis 22:13

In the allegorical language of sacrifice, in that critical moment Abraham looked to God and saw Christ. And through the sacrifice of the Savior Abraham found the strength to break the cycle of abuse.

Through my own healing, I rely on the power of the Atonement daily. I need it to do the hourly work of forgiveness, to be humble enough to recognize what parts of me are still affected and root out the disease, to be courageous enough to tell the truth and face the consequences, and to heal the parts of me that instinctively repeat what I’ve experienced.

Abraham is a hero not because he was willing to sacrifice his son, but because despite every instinct, despite how he was raised, despite years and years of sorrow over promises he feared broken, he still chose faith.

Tresa Edmunds blogs at feministmormonhousewives.org as Reese Dixon. ReeseDixon.com as herself, and everywhere else as a mouthy broad.

All posts by Tresa Edmunds