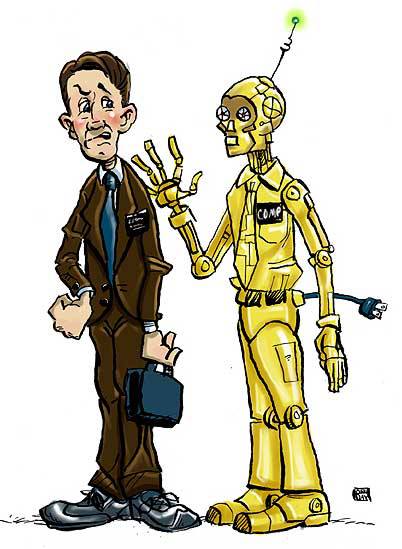 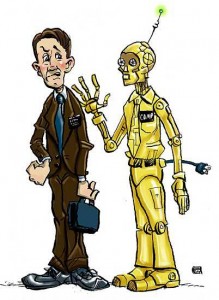 NOTE:  This post is based on ideas Stephen presented on Mormon Matters podcast #180. Click here to listen to the podcast.

I learned an important lesson early in my mission: leave the quad home but take On the Way Home. The reason was this: the quad was heavy and On the Way Home brought the Spirit in fast. We knew that if we could get that tape into an investigator’s VCR (yes, I am that old), we’d already be halfway to a baptism commitment.

One evening as I was sitting with my companion watching On the Way Home for the 50th time, still feeling the Spirit, still getting weepy at the end, I had a strange thought. “This video tape is better at getting people to feel the Spirit than I am.”

In fact, it was better at bringing in the Spirit than any missionary I had ever met despite the fact that the tape mechanism produced the exact same sequence of images and sounds over and over and over again

Since then, technology has taken on an even larger missionary role. You Tube, Facebook blogs, websites: they’re all being used to spread the gospel, even though they are made up of soulless conglomerations of circuits and electrons.

Is this weird? Should technology really be so adept at eliciting what seems to be an exclusively human function: spirituality?

Though we don’t usually consider them this way, books are technology. Scrolls are technology. Brass Plates are technology. Even writing is technology. We create something that is obviously not human to record things that help us feel the Spirit and interact with gospel teachings. God used technology to get the Ten Commandments to the Children of Israel. God told Nephi to kill Laban in order to obtain a piece of technology that would keep the Nephites on the right track.

What is the best way to convert someone to Mormonism? What is the Keystone of our religion? Not a human, but a book. A piece of technology that, if read, is said to convert the receptive human soul. In other words, though we usually don’t talk about it in such terms, we Mormons are unabashed in our confidence that technology can change the human soul.

With this in mind, I would like to suggest that the Church embrace what could potentially be the greatest innovation in missionary work ever: the chat bot.

I know. It’s creepy to think about sending potential investigators to a machine. But most of us would willingly hand them a Book of Mormon, right? What’s the difference between the two besides the complexity of the technology? Chat bots, it’s true, often pretend like they’re humans (and according to Brian Christian’s book The Most Human Human, they are getting better and better at it), while the Book of Mormon is most definitely a book. So let’s sidestep the human façade and hypothetically place a chat bot on the Church’s home page, labeling it as such. With it, we’ll invite the mildly interested to use it as a low-stakes first contact with Mormonism. They can ask questions without feeling the need to observe social niceties; they can break the conversation off without worrying that they will hurt a human’s feelings.

Imagine what this chat bot could offer. The programming could be sophisticated enough that simply by noting the location of the user’s ISP, the chat bot could make many relatively accurate assumptions about how best to approach the user. Is the user’s ISP in a large city? A rural area? A rich area? Poor? What are the political demographics there? How many Mormons live nearby? Then, from the way the user communicates—the vocabulary and sentence structures he or she uses—the program could tailor its approach to the user within a matter of a few single-line exchanges.

And then comes the fun part: a well-programmed chat bot could have access to everything ever written about Mormonism, Christianity, or … anything: it could have instant access to magazines, blogs, message boards, Church talks, Ensign articles, and the scriptures. It could be Bruce R. McConkie, Chieko Okasaki, Hugh Nibley, and Laurel Thatcher Ulrich all rolled into one, ready at a nanosecond’s notice to detect and build upon the user’s sympathies and interests. The Tea Party enthusiast could be led to the gospel through Ezra Taft Benson and Captain Moroni. The literature lover could be wooed with Eliza Snow’s poetry. The eastern European could be tantalized with Dieter Uchtdorf’s sermons. And all in the breezy conversational tone that chat bots are getting better and better at.

Then, if the cyber-investigator becomes interested enough, we could send by some flesh and blood missionaries. And with such great preparation from the chat bot, the likelihood of a baptism would likely be sky high.

Unless of course, the investigator becomes disillusioned by the real missionaries’ inability to connect with them as sympathetically or intelligently as had the chat bot. Or worse, the investigator might come to church expecting talks and classroom conversations to be on a level entirely different than what they actually encounter. Could our Mormons, as human as they are, meet the expectations of an investigator who converted to the gospel through a chat bot?

Hmm. I’m starting to think that maybe it’s best to just leave this missionary thing to the humans. Technology is just too dang good.