I’ve said before on many occasions, that while I am certain I can claim to be a good Mormon, I am not a remotely perfect Mormon.

And neither are you.

I’m not just saying they haven’t been perfect. I think most people are willing to at least passively assent to that statement. I am saying that none of them have been REMOTELY perfect.

Brigham Young was a man who prided himself on the mastery of his vices. Unless you count pride. He also can be accused of at least some level of hypocrisy. He railed against the baseness of the human pursuit of wealth, but was notorious for acquiring or retaining fellow saints’ property by less than ethical means, and he died one of the wealthiest men in Utah. 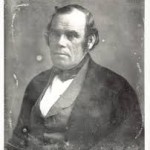 The most beloved apostle of the early church was Parley P. Pratt, who is widely considered to be the most holy martyr in Mormonism outside of Jesus, Joseph, and Hyrum. But Parley probably wasn’t murdered for his testimony of Jesus. He was gunned down by the bitter legal husband of his 11th polygamous wife, with whom Parley had conspired to kidnap her 3 children. Hector McLean was a deplorable man in almost every respect, but let’s be honest… Parley was no choir boy.

Any way you slice it, Ezra Taft Benson was a racist… and most of his contemporaries were too, though they ranged in their level of “benevolence”.

Even the deeply beloved (including by me) Gordon B. Hinkley was duped by a forger and con-man and spent personal fortunes on acquiring documents that purported to disprove some of Mormonism’s truth claims, presumably to keep them hid from the public eye.

I don’t think I need to start on Joseph Smith.

I think you get the point.

Not only are our leaders and fellow saints deeply and tragically flawed, they are deeply and profoundly human. They are like you and me. They are proud, jealous, angry, unfair, petty, intractable, loving, kind, forgiving, faithful, devoted, and loyal. They embody the full range of human potential from the heights of our genius to the Sheol of our basest instincts. Their souls contain surpassing compassion and yet they are sometimes guilty of astonishing neglect. People I love with all of my heart have accused me of fault-finding, negativity, and “evil-speaking of the Lord’s anointed” and well, they might be right.

But the meddlesome facts I delineated above actually serve to strengthen my faith. They give me confidence in my own walk through this incredibly fallen world. At my most honest and introspective, I see the same range within myself. I am developing the most enveloping charity at the same moment I am fighting off the most deplorable and hideous anger. I am a fiercely loyal friend and I have a foul tongue. I blame driving in Boston, but in all seriousness I’m the fountain from James 3:11. I bless and I curse all day long. Like the scriptures themselves, I am a cornucopia of contradiction. In short, I’m a person.

How can my faith be strengthened by knowing the worst about people? Because it echoes the worst in Jared Mooney, who is the person in my life that I am least likely to forgive or try to redeem. Also, because Jared has faith in a mystical force we often call the Lord Jesus Christ, but which I often like to just call redemption. Here’s how it works:

Imagine the best actual human being you can possibly imagine… somebody like Gordon B. Hinkley (or I’d even aim at like, Ghandi… even Ghandi was kinda sexist, but I digress). Jesus doesn’t count in this scenario if you accept his infinite nature… which I do. Let’s say that incredibly enlightened person gets out of life with like 7 Million “righteousness points”, hereafter designated as (r). And then Jared gets out of life with like, negative 850,000 righteousness points. (Maybe there’s some wickedness points in the balance, too) 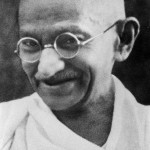 So, Ghandi and Jared come to eternal the judgement bar.

The requirement for entrance into exaltation in the celestial kingdom of God, as I understand it, is infinite righteousness. Unfortunately both Ghandi and I will fall short of that number, despite our best efforts, and no matter how many Latter Day Saints get dunked in the G-man’s behalf. But God, being infinitely good at math, knows how our judgement will go if left to ourselves, and so he devised a way that we could make an eternal covenant that would bind us to a being that possesses infinite righteousness… the Lord Jesus Christ. Having received all that his Father hath, our redeemer not only pays our debt of sin to redeem us from bondage, he shares his righteousness with all those who have covenanted with him. And that righteousness, being infinite, finally gives us the needed variable. The equation now looks something like this:

Every last one of us will need the intercession of our Lord, not only to “atone for our sins” but to qualify for Eternal Life, which requires something substantially more than a zero sum. If we would become like God, we must be made partakers of the heavenly gift. We need saving GRACE. Judgement comes down to not what we do, but what we have and are willing to become. Our very nature must be transformed. Paul calls it “putting on Glory”. As Stephen Robinson puts it, “The question is not, ‘have I been good enough?’, but ‘Do I have a covenant?’.” I’m as grateful for Brigham and Joseph and Parley and Ezra’s weaknesses as I am for my own. Frailty and failure is the disease and consequence of mortality, the same as death. Deep and abiding imperfection is our lot, and most of us never escape it. The message of the gospel is that there is hope for all of us… even a sure word of hope. And our hope is in Christ. 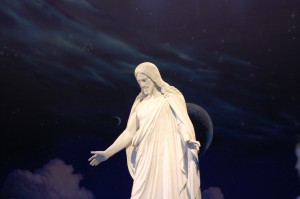