CELEBRATING PALM SUNDAY AS A MORMON WARD – A REFLECTION 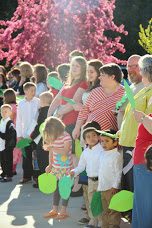 CELEBRATING PALM SUNDAY AS A MORMON WARD – A REFLECTION

We piled into our minivan almost a half hour earlier than we normally do.

“Okay, I’ll say family prayer,” I said. “…Heavenly Father, we are grateful that today we can remember the last time Jesus went into Jerusalem…”

When we arrived to our beautiful church, there were already about fifty of our ward members lined up outside on the sidewalk.  I passed out slips of paper that contained  a verse from the Gospel of Matthew that we would be saying in unison as a ward.  Shortly after palm fronds were passed out that the Primary children had made.  Our bishop welcomed everyone and explained the significance of what we were doing.

An eleven year old girl then came to the front and read out loud:

“And the disciples went, and did as Jesus commanded them,

And brought the ass, and the colt, and put on them their clothes, and they set him thereon. 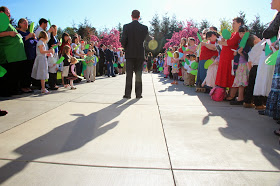 Bishop Wallace explaining to our ward the significance of Palm Sunday

And a very great multitude spread their garments in the way; others cut down branches from the trees, and strawed them in the way. And the multitudes that went before, and that followed, cried, saying,”

She paused.  And in unison, parents, children, grandmothers, and grandfathers all shouted while waving their palm fronds:

“Hosanna to the Son of David: Blessed is he that cometh in the name of the Lord; Hosanna in the highest!!!!”

(Matthew 21:6-9) We then walked into our beautiful ward building. When the Sacrament of the Lord’s Supper was blessed and passed, I thought deeply.   Matthew chapter 21 had taken a new meaning in my life.  I focused on that.  I pictured in my mind a group – smaller 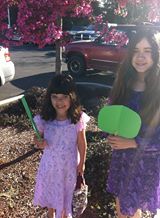 My daughters holding palm fronds made by the Primary children

than that which met outside our country chapel –  over two-thousand years ago laying down clothes and tree branches for Jesus of Nazareth as He entered Jerusalem for His last time. When I put the tiny morsel of bread in my mouth and drank that small cup of water, something changed in me.  I don’t know what…

If you would like to read more about what the Medford 4th Ward of the Central Point, Oregon Stake is doing to celebrate Holy Week, click here.