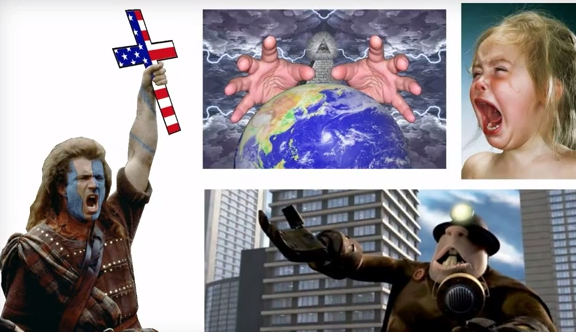 Just in time for the annual conflict for Christmas, here is my latest video. Warning: this one gets political.

Growing up in rural Arizona, I had a pretty long bus home from elementary school every day. On the days when I didn’t fall asleep, miss my stop, and have to wait in the “bus barn” for my Mom to pick me up, I’d pass the time chatting with my childhood buddy Joe, who lived even further along the route than I did. There was one particular week of the long commute that I’ve never forgotten. Joe, who was extremely sharp, was describing some picture book that he had read about the history of life on earth. When he arrived at the topic of cavemen, my mind simply rejected the thought outright. Cavemen?! How could such a thing exist? It must be blasphemy! For some reason, the idea of cavemen did not fit in the timeline of earth history I had in my mind, which was something like this:

So, I decided to change his mind. And by “change his mind,” I mean I repeated variations of the phrase “there’s no such thing as cavemen. How could there be cavemen?” over and over. It took about 45 minutes, but just before my stop, he finally threw up his hands and said “Fine!” I smiled, grabbed my backpack, and trotted off the bus.

I never told Joe this, but I felt a sharp pang of regret as I watched the bus pull away. What was my problem? He had just been sharing something he thought was interesting, but I felt compelled to brow-beat him into submission. As I’ve grown older, I realized why I had been so insistent: the thought of my friend not sharing or endorsing my worldview freaked me out, so I lashed out.

To me, the annual “war on Christmas” conversation seems to stem from the same sense of insecurity. It isn’t that more and more people hate Christmas; it’s just that enough people would be ostracized by interpreting the season from a Christian point of view that municipalities and companies decide it isn’t worth it. But when “Christmas” becomes “Holiday,” we’re suddenly back on the school bus, sitting next to Joe and talking about cavemen. “Holiday”? What is this “Holiday”? It’s Christmas! It’s always been Christmas! My ideas are valid! This is war!

However, I wonder how much any of this would matter to Christ. Take the following exchange in Matthew 16:

13 When Jesus came into the coasts of Cæsarea Philippi, he asked his disciples, saying, Whom do men say that I the Son of man am?

14 And they said, Some say that thou art John the Baptist: some,Elias; and others, Jeremias, or one of the prophets.

The speculations of his identity from the larger society are brushed away without a second thought as he asks the more important question—what do you think? To him, individual understanding was more important than the societal validation.

So don’t be like young Brother Jake. Don’t brow beat those around you to stave off insecurity. The temptation to require validation for our opinions and ideas from those around us can be strong, but it’s very rarely the best course of action. And above all, have a wonderful, beautiful Christmas.

Brother Jake is the baby of a big Mormon family. He enjoys playing video games and making videos. After serving a mission in Peru, he married a violinist, transferred schools, and finished his undergrad at Indiana University. He is currently pursuing a Master's degree in analytics (a dumb word for "statistics") at NC State. He has extremely stretchy elbow skin.

All posts by Jake Frost