Boy Scouts, Mormonism, and Me 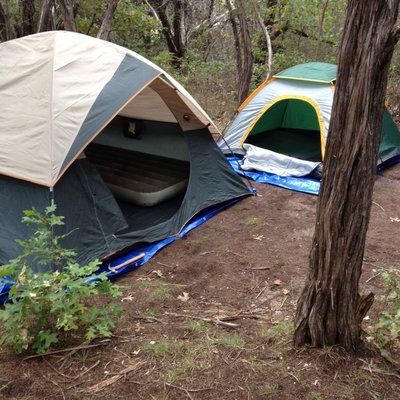 I come from a proud tradition of Eagle Scouts. My father and his 10 brothers hold the world record for most Eagle scouts in a single family [1]. It’s a record so unimportant the family remains unsuccessful in getting the Guinness Book of World Records to take notice. Despite Guinness’s ambivalence, my family made sure the importance of this award was emphasized by forbidding me from receiving my driver’s license until I had completed all requirements for my Eagle Scout. Which is why I started college with barely two months of solo driving experience. The quick reflexes of drivers around me in St. George, Utah remains the best evidence for the angelic protection of my Mormon ancestors. My uncles never failed to take opportunities to tell me how an Eagle Scout badge had impacted their lives for the better: “I never would have had a job if it weren’t for my Eagle Scout. Those companies had hundreds of identical resumes. But mine said Eagle Scout on it.” 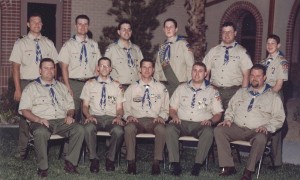 11 Eagle Scouts in One Family

Unfortunately, I am not a good scouter. I am a nerd. Camping in the wilderness sounds about as enjoyable as pulling weeds, something I also got to enjoy for my Eagle Scout service project. This lack of outdoor ability was exacerbated by my lack of respect for authority and propensity for complaining, skills that have come in handy for writing in the bloggernacle. My supreme nerdery also extended to craftiness, which became all too apparent during a summer where every Wednesday night was spent in the Scoutmaster’s woodshop where we worked on the Woodworking merit badge. I chose to make a bookshelf, which was composed of three pieces of wood: a base, and two sides. It was crooked, unpolished, and nails were showing, but I got it done. During one boring night of woodworking my scoutleader finally broke: he grabbed my hair and shook my head with each word, “Stop! Being! A! Smart! Ass!” These moments never failed to confuse me. I never was able to understand my ability to drive adults to literal insanity through snappy retorts; I just knew I didn’t want to be there.

During my junior year a new kid moved into our high school of 180 kids. He was really big into scouting. Unfortunately, he was not Mormon. Of course, the local zealots were very excited to tell him about the local scout troop and invite him to the next meeting. He showed up on the next Wednesday with a full uniform complete with sash and merit badges. It was not a good first impression. We snickered while thinking about our two-sizes-too-small uniforms that were only worn at scout camp in early morning flag ceremonies. Unfortunately, being the nerd in the group, a friendship with me would not help his social standing. We also had few common interests: he liked scouting, I liked reading. I still feel bad about how we treated him. While in an ideal world scouting teaches us about working together and friendship, I learned that insular groups have a very difficult time with accepting outsiders. 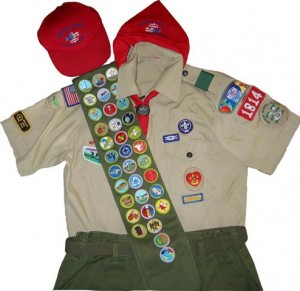 This was not my uniform.

The buzz about homosexual leaders in scouting was building. The (very scary) gay and atheist activist groups were pushing for change and conservative Mormons were not going to have it. There were rumors (as far as I know, completely fabricated) that the Church would pull out of scouting completely. The Duty to God manuals only added fuel to the fire, despite the fact that we ignored the program completely in favor of scouting.

Some of my best memories of scouting were in week long scout camps. One summer my dad decided I wasn’t quite committed enough to getting my Eagle and so convinced my uncle (who of course was a scoutmaster) to take me on a second scout camp that summer. This meant that I had to go with a group of boys I had never met, and they were from the big city of Las Vegas, no less. We drove out to the mountains and showed up for camp. We drove up to our prime camp spot only to find another troop already there. Furious, my uncle went back to speak to the camp Administrators, who offered sympathy about the mixup but decided we would get the lone spot left over at the very top of the 1.5 mile hill. As we made the 30 minute trek up the hill I attempted unsuccessfully to befriend the other scouts who joked about sex positions I had never heard of. My uncle said that his lips were chapped and asked to borrow my Carmex. That afternoon, we were required to take a swimming test whether we planned on swimming or not, and being a nerd, I had no desire to swim. I jumped in the water, splashed about pretending I didn’t know what I was doing and said, “I don’t know how to swim,” and got out. In line for lunch we got wet some more with misters that were so broken we mostly just got rained on. We ate cold, unrecognizable food and drank koolaid that never seemed to be nearly sweet enough. We participated in long-held scouting traditions like pouring flammable things like sugar into the fire and catching squirrels in Doritos bags. Two days into the camp my uncle gave me back the Carmex completely empty. How he went through so much Carmex in such a short period I’ll never know, but I had to go the rest of the week in the dry desert with chapped lips. 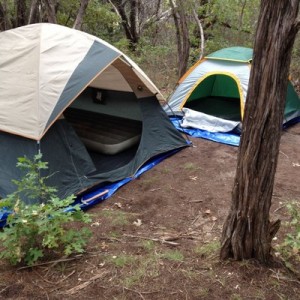 In the end, scouting feels like a metaphor of the Church in general. I have a hard time enjoying it but hope that it’s good for me. As an adult I struggle through boring church classes and sacrament meetings, and deal with people that don’t seem to want me around. The hope is that the experience teaches me to love others, focus on improving myself, and find ways to learn from classes that I often find unfulfilling, while working through my distrust of leadership and their functionally-infallible inspiration. In scouting I went to weekly meetings I didn’t want to attend, learned outdoor survival skills I didn’t want to learn, and tried to respect leaders I didn’t respect. Was it good for me? I don’t know. I have my Eagle Scout. I was always told that I would regret it if I didn’t get one, but I don’t feel all that happy for getting one, and don’t look at it all that fondly. To add salt to the wound, my parents basically gave up on the Eagle Scout with my two younger brothers. Life is full of experiences with seemingly no purpose. I think I learned in the end that…Um….I just realized I have no conclusion for these concluding remarks. I probably learned something. Probably.