Book Review of Hearts of the Fathers: A story of Heaven, Hell, and the hope of new life after life by Sheldon Lawrence 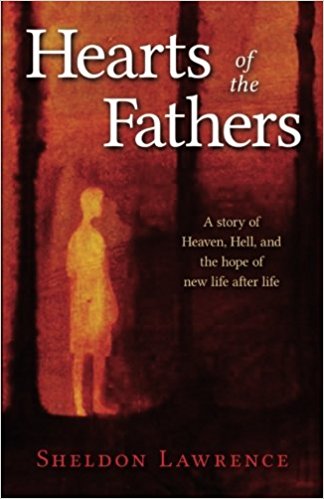 I’ve read many good books in my life, but there are a select few that stick with me, shaping a little piece of who I become. Hearts of the Fathers: A story of Heaven, Hell, and the hope of new life after life by Sheldon Lawrence is one of those books.

Hearts of the Fathers is the story of a man whose life is filled with anger and broken relationships. When his spirit flees the scene of his own death (a car wreck caused by his drunken negligence), he ends up in “Hell.” It’s a place where dark spirits hunt the earth, encouraging and cultivating anger and rage in humanity in order to feed off it. He soon realizes he no longer wants to be part of this dark world, and he is given the chance to enter heaven. However, because he does not feel worthy of heaven, he ends up wandering through other realms, where he sees and experiences many different enticements that prevent people from reaching their full potential.

When I first read the description of the book — all about a spirit wandering around in the afterlife — I was worried that the book would be too abstract and heavy. It’s surprisingly not.

Though it is fiction, Lawrence’s inspiration for the book came from the study of hundreds of near death experiences (NDEs), along with religious texts from many major world religions. During an interview, Lawrence stated: “Just about every theme or event in the novel correlates to something in the NDE or wisdom literature, but my object was not to create a kind of prototypical NDE master narrative. Rather, I wanted to show that our spiritual journeys continue into the next life in a very concrete way. We do not just float around in the ether but are engaged in the work of lifting one another into higher states of consciousness” (Chopra).

One thing I loved about this book is its portrayal of heaven and Hell as places people choose to enter. My own childhood concept of the next life was there would be a judgment day, we’d all be assigned our fates for eternity, and that was it — everyone would be stuck where they landed. In this novel, even in the afterlife, everyone has the opportunity to progress, everyone has the chance to change, to let go of the earthly addictions and pride that hold them back — the only thing that impedes or encourages their progress is their own desires and choices. This concept is so much more aligned with my belief in a loving Heavenly Father. I can’t imagine that a loving father would ever turn away a child who recognized he wanted something better and was willing to take the steps necessary to repent, whether it was in this life or the next.

Another aspect of the book I loved was its portrayal of repentance. Without giving away too many spoilers, when the main character eventually reaches heaven, he learns he must face his past. He’s given the chance to see and experience the lives of significant people from his life. The process of seeing life from different perspectives teaches him to have compassion and forgiveness for those who hurt him, while also learning humility and love for those whom he hurt. There is a sense from this novel that the whole purpose of life, the whole purpose of repentance, is to learn to love and appreciate the people around us, to recognize that there is goodness inside of everyone, and ultimately, to use that love to

reconcile and reunite each of us as spirit brothers and sisters back with each other and our Father in Heaven.

One quote that sums up so much of what I love about this book states: “Evil is not an inherent quality of any being’s soul, but a temporary condition of ignorance. God’s work is not to sort out the righteous from the wicked, but to awaken souls to an understanding of their true selves. Once souls understand this fully, they will return to the God who gave them life.”

Those words have been a bright beacon in my mind ever since I read this novel a few months ago.

Much like the work of C. S. Lewis, this is a book full of depth and wisdom, yet it’s all intertwined in a beautiful storyline that makes it easy and enjoyable to read. Though Lawrence is LDS, his novel is not entrenched in religious dogma, making it a book that anyone interested in the purpose of life or life after death would enjoy.

And it’s a book that will remain in my cannon of influential reads for many years to come.

Chopra, Becca. “#BookReview and #Interview on a Novel about the #Afterlife: Hearts of the Fathers.” Becca’s Inspirational Book Blog, 4 Oct. 2016. https://beccachopra.com/2016/10/04/bookreview-and-interview-on-a-novel-about-the-afterlife-hearts-of-the-fathers/. Accessed 12 March 2017.

Lalove Foster is a life-long Idahoan and member of the LDS church. She has an MA in English with an emphasis on personal memoir. She works as a technical document editor for an energy research company, is a full-time mom to three crazy kids, and aspires to one day write her own novel, though it will have to wait for a day when her three littles aren’t crawling all over her and her keyboard.

All posts by Lalove Foser