By the Hand of Mormon – A Book Review 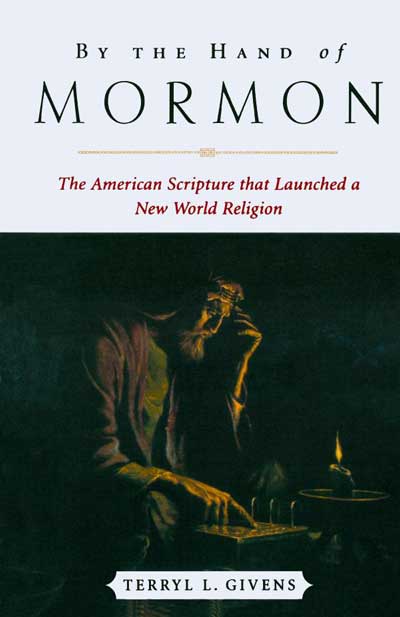 This year I have set upon a journey to do an in-depth study of the Book of Mormon. I, like many others, have so many questions about this fascinating book and “keystone” of the religion I follow. One of the books that stood out in my search for material was Terryl Givens’ By the Hand of Mormon. Terryl Givens is one of the most recognized and beloved Mormon scholars today. If anyone could put together an overwhelming compilation of faith-promoting evidences of the Book of Mormon it has to be him … or so I thought.

Givens divides the book in such a way that is both readable and logical. Each chapter has a theme and subtopics of that theme are covered thoroughly. The first chapter for example is entitled “’A Seer Shall My God Raise Up’: The Prophet and the Plates”. The chapter covers the history of Joseph Smith and the the varying histories of how he obtained and translated the plates. A great foundation for the book as a whole.

By the Hand of Mormon is a phenomenal resource for those looking to understand the many roles of the Book of Mormon throughout history. The book covers it all; the theories of its origin, the changes over time, its use and disuse in the Church, literary analysis, the translation process, the critic’s views, the dogmatic followers’ views, the views of those in between, the culture during the translation process, archaeological connections and the lack thereof, etc. One would be hard pressed to find something about the Book of Mormon that it does not touch upon. Givens also does not skimp on references and notes, there are 63 pages of them concluding the book. The Book of Mormon lacks unique Mormon theology. I have heard this before I read this book, but it was driven home by Givens. It was fascinating to me to read that the Book of Mormon was not a major tool for conversion due to its new theology, but its alignment with what is taught in the New Testament.

Those expecting an exposition of a peculiar Mormon doctrine will be disappointed: the Book of Mormon contains no explicit mention of exaltation (the eventual deification of man), the degrees of glory, tithing, the Word of Wisdom, baptism for the dead, premortal existence, or eternal marriage. In fact, the accounts of early converts to Mormonism confirm that it was the congruence of Book of Mormon teachings with the New Testament that dampened their objections to a new scripture and allowed it to affect their conversion for reasons other than doctrinal novelty or innovation.

The Book of Mormon gives a new perspective on revelation, dialogic revelation. The meaning of dialogic revelation is revelation that occurs through direct communication ie) ask a question, get an answer. I have to admit that I was absolutely oblivious to the fact that this doctrine was something unique to Mormonism. Another perspective, revelation as history, for example is that God does not communicate directly with us, but we obtain revelations by analyzing historical events that are taken as the “mighty acts” of God. Thus revelation is an indirect method of assessing why something occurred and how it shows some element of God’s nature. There are more views of how revelation functions, but the Book of Mormon is almost purely dialogic revelation. The question and answer pattern is found all over the place and indeed is taught to every man, in the text and those reading the text, to speak to his maker in this way.

Through chiastic form, thematic structure, numerous textual examples, and a final concluding instance of readerly invitation, the scripture hammers home the insistent message that revelation is the province of everyman. As a consequence, in the world of the Book of Mormon, concepts like revelation, prayer inspiration, mystery find powerful and substantive redefinition. That may well be the Book of Mormon’s most significant and revolutionary-as well as controversial-contribution to religious thinking. The particularity and specificity, the vividness, the concreteness, and the accessibility of revelatory experience-those realities both underlie and overshadow the narrated history and doctrines that constitute the record. The “knowability” of all truth, the openness of mystery, the reality of personal revelation find vivid illustration within the record and invite reenactment outside it.

As mentioned in the initial paragraph I was hoping for a vehicle of faith promotion. That is not what I got. While the book draws some conclusions that are emphasized repeatedly, do not expect a source of non-stop evidences proving the Book of Mormon is the absolute word of God. By the Hand of Mormon is objectiveness at its finest. The views of the various readerships-critical, faithful, and somewhere in between-are on full display with reasoning behind them. Is there an ever-so-slight bent towards a faithful view of the Book of Mormon? I would have to say yes. But that is one of the beauties of analytical works, the passions of the author are infused in the words.

So where am I now? Retrospectively I see how naive I was to expect a fact based proof of the Book of Mormon. Terryl Givens is a man of faith with a lot of knowledge. How was I supposed to gain certainty about the historicity of the Book of Mormon from a man that states in his author’s note “the disputability of the facts is too obvious to bear repeating on every page”? And so I am left with faith and choice once again. Where will I put my faith? The final thought comes from the author in a FAIR podcast.

If certainty becomes a quest then you spend your life chasing the loose threads of the Gospel. I think that what is lacking in Mormon culture is a greater appreciation for the value of faith itself. I don’t mean this as some type of glib cop out… I mean this in some very deep rooted existential way. The freedom to choose to believe is a kind of moral imperative. If we were to ever reach a point in our life where we felt the evidence for or against Christ’s divinity, or the Book of Mormon, or Joseph Smith’s prophetic calling were overwhelming then there would be a type of intellectual compulsion involved and our faith would not be a matter of choice. In my personal life, at least, I have developed I think an ability to value and even to cherish the opportunities that come to me frequently to define myself and to affirm my values by choosing to embrace one set of alternatives over another when the evidence creates a condition of relative equilibrium where there are good grounds to believe and good grounds to disbelieve. Then the question is what do you affirm by the choice you make.