The Blessings of (Ordination to) the Priesthood 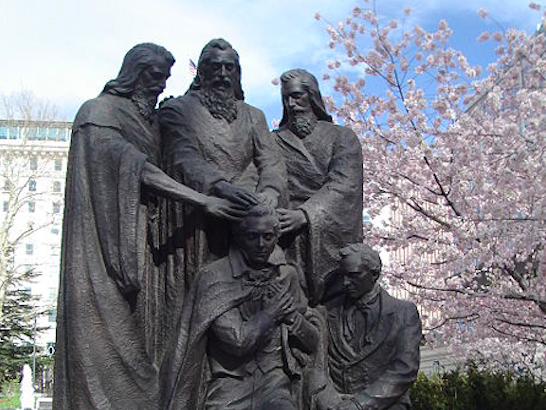 I have been actively participating in the conversation about gender in the LDS Church for quite sometime now. I have listened carefully to a range of ideas about why LDS women are not now ordained to the priesthood, what that tells us about gender and about the priesthood, and whether the current policies will change in the future. I have often been surprised, sometimes intrigued, and not uncommonly disappointed. Particularly upsetting to me have been explanations that demean LDS men or belittle the power of the priesthood.

I was born a male and have reach adulthood, thus making me a man. According to the family proclamation, being a male is part of my eternal identity, not merely a mortal characteristic. Nothing in this life will change that, including my priesthood status or the priesthood status of others.

Can being ordained to the priesthood make me a better man? Yes, I believe holding the priesthood helps make me a better person (and thus a better man) in at least three ways: (1) By encouraging me to live righteously so I can exercise God’s power, (2) By giving me meaningful opportunities to serve, and (3) By allowing me to participate frequently in performing holy ordinances. Allow me to elaborate.

1) Since before I turned 12 and was ordained to the office of deacon, I have continually learned in Church and in my home that the priesthood is a sacred trust, a great power bestowed with an expectation that I will live in a certain manner. In order for the ordination to have any real effect I must meet certain standards (law of chastity, word of wisdom, etc.) and engage in a lifelong effort for purity in deed and in thought. I learned early on that I wouldn’t always know when opportunities to use my priesthood would arise, so I had to strive for continual worthiness. Though we talk a great deal about worthiness in connection with eternal goals, that’s a remote concept for a teenager. Priesthood ordination made worthiness into something much more immediate.

In my teenage years and young adulthood this emphasis on worthiness helped me steer clear of potentially dangerous activities by giving providing a personal counterbalance to peer pressure. It also helped me develop essential spiritual habits in my youth. Now these commitments and habits have become personal to me, part of how I live my life each day.

2) From the time I was ordained to the Aaronic Priesthood, I had an ongoing responsibility each week when I arrived at Church, a role to play in a sacred ordinance for all members of the congregation. As a deacon I learned the routes and worked to develop the correct bearing while passing the sacrament. As a teacher I took pride in my order and cleanliness in preparing and cleaning up after the sacrament. As a priest I studied and memorized the sacrament prayers and also trained and supervised other priesthood holders. My responsibilities extended beyond my own congregation; it was not uncommon for me to help with the sacrament while on vacation in other wards.

Though the sacrament was the earliest and most public set of responsibilities I received as a priesthood holder, it was certainly not the end. As a deacon I was sent to members’ homes to collect fast offerings. (They had to be asked not to donate at Church, making clear that this less-efficient method was solely for the young men’s benefit.) Eventually additional assignments came: service in quorum presidencies (including receiving priesthood keys), home teaching, missionary work, administering to the sick, counseling with members, and interviewing converts and members for baptism and other sacred ordinances. These experiences deepened my testimony, broadened my experience in the gospel, encouraged me to develop new talents and skills, and drew me closer to my Savior.

3) It is difficult to put into words, let alone to overestimate, the experience of performing a sacred ordinance. The Doctrine and Covenants states that in priesthood ordinances “the power of godliness is manifest” (D&C 84:30). That is particularly true for those receiving and performing the ordinances. The closest I have come to describing what it is like to lay hands on someone’s head and speak words inspired by the Spirit while invoking the priesthood is to reflect that I feel as though I never stand taller than in that moment. I often feel an almost physical connection to heaven, one that lifts me up while simultaneously distilling inspired direction.

So far, it has been my opportunity to baptize, give the Gift of the Holy Ghost, bless, heal, provide inspired counsel, ordain, and set apart. Whenever I have performed these ordinances I have grown closer to the Savior – in whose name and by whose authority I perform them – and to the recipient of the ordinance. This has especially been the case when members have asked me personally to perform the ordinance and with members of my own family. Sharing in – rather than simply witnessing – these sacred events has been a tremendous blessing unlike any other.

None of these three ways in which the priesthood has blessed my life and made me a better man are exclusionary. They don’t depend on others being kept from the same blessings. I grew up in a home in which my father and later three brothers were all ordained to the priesthood. At no time did I feel that my priesthood was diminished by their ordination. In fact, helping ordain my brothers was one of those opportunities to perform a holy ordinance that reaffirmed my testimony and commitment to live righteously. Serving together in the priesthood with family members was another blessing that came with the priesthood.

Might there be some men (especially young men) who value their priesthood more because they have been given something that women have not? Certainly. But this is the worst kind of chauvinism and should be discouraged in all instances. It is the opposite of Christlike love, that charity which envieth not, seeketh not her own, and invites all to come and receive the full blessings of the gospel. Like Moses, we should hope that all might be prophets in Israel (see Numbers 11:25-30).

When I was ordained to the office of High Priest I searched the scriptures for examples of great High Priests whom I might emulate. One verse that serves as my guiding light is this account by Abraham of the circumstances surrounding his ordination:

“Finding there was greater happiness and peace and rest for me, I sought for the blessings of the fathers, and the right whereunto I should be ordained to administer the same; having been myself a follower of righteousness, desiring also to be one who possessed great knowledge, and to be a greater follower of righteousness, and to possess a greater knowledge, and to be a father of many nations, a prince of peace, and desiring to receive instructions, and to keep the commandments of God, I became a rightful heir, a High Priest, holding the right belonging to the fathers” (Abraham 1:2).

Abraham sought the priesthood for many reasons: increased happiness, peace, rest, righteousness, knowledge, revelation, and leadership. These were all righteous desires which led to him not only being ordained but becoming one of the greatest priesthood holders in recorded scripture. But I think the key lesson here is that he sought the priesthood, and he sought it in part because it would bring a greater measure of “happiness and peace and [the Savior’s] rest” for himself as well as for others.

Like Abraham, I have enjoyed great blessings as a result of my ordination to the priesthood. Also like him, I expect many of those hoping and praying and asking for a revelation on women’s ordination are also seeking this for righteous reasons.