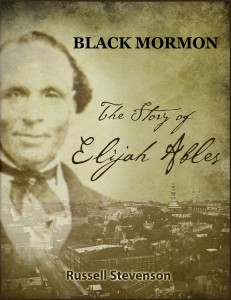 The book Black Mormon follows the life story of Elijah Ables, a prominent and part African American member of the Church of Jesus Christ of Latter-day Saints. Ables was converted to the Mormon faith during the early years of the Church. It was a tumultuous time for both the Mormon Church and the United States: the Mormons were continuously being persecuted, killed and forced out of different communities while the US was moving swiftly towards the Civil War. The early Saints experienced a time of extreme upheaval and Elijah Ables, as a member given the Melchizedek Priesthood and listed as a Seventy (pg 6), was in the middle of both the persecution of the Mormons and of African Americans. His conversion, his baptism, his priesthood authority and callings raise questions relevant to the historic LDS policy of excluding black members from the priesthood.

One of the great strengths of Stevenson’s book is the context he adds to the history of Ables and the LDS church. Societies around the world shift and change as they work to figure out what is right and what is wrong. It is only “in context” that we truly understand history and the choices made. The context in which historical decisions are made plays a critical role in helping current societies understand these choices but it is also important to note that context still does not justify incorrect choices. This is an important distinction that Stevenson makes in his book when explaining how the policy of denying blacks the priesthood came about.

Stevenson shows that Joseph Smith set no doctrinal or revelatory precedent for the policy of excluding blacks, nor did his practices imply such a policy.  Stevenson then presents the reader with evidence and understanding as to why this policy was begun in the years after Joseph Smith’s death and establishes the haphazard progression of decisions that led to the implementation of the policy by subsequent leaders, also showing that it was not grounded in doctrine or a later revelation.  Stevenson helps to explain how the policy of denying blacks the priesthood came about, but never justifying the incorrect choices.

The first part of the book focuses on Elijah Ables, both his early life and his callings in the Church. Documentation for his early life is scarce but Stevenson believes Ables was most likely born a slave to a Black mother impregnated or raped by a white man. It is not clear if Ables was a runaway slave or a free black man when he was baptized in 1832 by Ezekiel Roberts in Ohio. Stevenson then goes on to explain that being “mulatto” or part white and part black meant that he was considered “of the mule-kind.” At this time period, being part white was not considered an advantage and many believed that mulattoes were unnatural and could not reproduce like full black or white people. (pg 3) “Most Saints looked upon Ables skin color as evidence of race relations gone wrong.” (pg 5) Ables was ordained to the Melchizedek Priesthood in 1836 along with receiving his washing and anointings. He was confirmed an Elder and listed as a member of the Seventy (pg 6). Ables was a close friend of Joseph Smith who considered him a worthy member. It is important to note that although he was eventually denied temple ordinances and further advancement in the church by later leaders, he was still described by those leaders as faithful and devoted. In 1838, Ables was first called on a mission. He would serve mainly in Canada and Ohio where he worked with black and white Saints in both areas. Although he still faced discrimination at this time, it wasn’t until the death of Joseph Smith that exclusionary policies began to take hold.

The history and policies surrounding race-relations in the Mormon Church are complex and tangled. When in Missouri many of the problems with the Mormons arose from their anti-slavery stance and their welcoming of blacks and Native Americans into their communities and church. Missouri was to be a slave state. They killed and drove the Mormons from their state. Because of this persecution, the leaders of the Church began to pull back in their defense of African Americans. “Compelled to navigate the explosive minefield of racial politics, Joseph [Smith] negotiated several factions within the Church. Revelation bound Joseph to ordain Ables with one hand; politics required that he defend slavery with the other….How could Joseph accommodate both Mormonism’s proselytizing impulse and its pro-slavery constituency while placating the looming threat of the Missouri mobs?” (pg 11) The LDS Church walked this fine balance for many years but after the murder of Joseph Smith, opinions and support for black equality began to waiver.

In 1846 a free black named William McCary was baptized into the church. He married a white woman, Lucy Stanton, and was received well in the Church by Brigham Young and other leaders.  Not long after, McCary began to be involved in many questionable activities including marrying many women in a secret ceremony that involved his having sex with each of them in turn multiple times that day. (pg 44) These and other sexual improprieties continued. Eventually these problems with McCary led many of the Saints to cave to feelings of prejudice and it especially affected Brigham Young. “Brigham struggled to know with certainty. His community told him that interracial marriage was a crime…while his heart called for compassion and moderation. Faced headlong with the troubles of an American society he was struggling to leave behind, the Saints caved to the racial sentiments…” (pg 48) McCary’s immoral actions ignited a prejudice that was not to be overcome by the Saints despite the faithful and impeccable actions of Ables and other early black members of the Church. Despite the general prejudice towards blacks, there were still years of inconsistency. “There was a looming sense that something was wrong with being black. But how wrong? Where was the line? Aside from Brigham’s comments in sermons and offhanded remarks, Church leadership was vague on how these doctrines ought to be applied. Efforts to enforce the priesthood ban were inconsistent. Indeed, Young never attempted to strip Ables of his priesthood.” (pg 60)

Readers of “Black Mormon” will find the open-minded inclusion of the early Church inspiring while being simultaneously discouraged by the decisions and details leading to the subsequent policy of discrimination.  Stevenson’s research is extremely thorough with citations and documentation that fills a third of the book. The information is organized and concise yet still very readable. With the amazing life story of Elijah Ables, Stevenson is able to further this purpose, “In the light of a new day, [Ables] story can serve the purpose that both he and Joseph Smith intended: the bonding of God’s people without regard to ethnicity or national origin.” (pg 67)