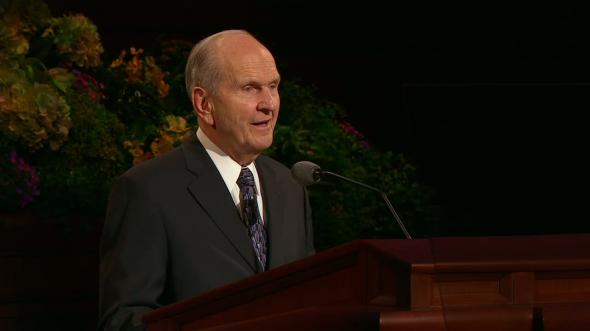 I had the following email exchange over the past two days, initiated by a friend who is concerned about Russell M. Nelson’s announcement on Sunday night that the recently introduced LDS Church policy on gay couples and their children has been elevated to the status of revelation:

[Friend] I am really struggling with this new exclusion policy. And now that Pres. Nelson has declared that the policy was direct revelation from God to his prophet, I’m kind of at my wit’s end. I’m wondering if you wouldn’t mind sharing your thoughts, if you have any, on how to remain in this church with good conscience while having real doubts about the veracity of the claim that this policy came from God. And what do I do? Can I really sustain the church leaders now? Can I pay tithing to an institution that I feel is harming people? Is it even possible for me to remain a member in good standing?

My husband and I are lifelong members and we are both returned missionaries. We have raised our children in the church. My oldest daughter, age 18 is also really upset by this new policy. I have been struggling and wrestling with my doubts about many historical issues, sexism and racism in the church for many years but more intensely the past couple of years. I have stayed in the church because it has been my whole life and I want to continue to have a spiritual home. I want God in my life and I have faith in Jesus Christ. But now I’m really struggling with this policy and I’m no longer certain that this church is the right place to be. But where would I go? It’s so interesting to me how so many people in my local ward have no problem with the policy whatsoever and have said, “of course it’s of God.” When my daughter brought up her concerns in her Laurel class, her advisor immediately shut down the conversation and said she supported the policy 100 percent. It leaves me wondering why I feel so differently. Have I been overcome by the adversary like so many would have me believe?

[My response] I suspect there are many people in this church who either have written or wish to write the kind of letter you sent me. Let me drop straight to the bottom line: the reason LGBT issues are splitting the LDS Church is that its leadership still clings to the belief—and some leaders cling to it with the tenacity of a death-grip—that homosexuality is a matter of choice, and that having made the bad choice at an earlier time, someone with “same-sex attraction” (a euphemism that I detest) can simply choose to be straight. All of our LGBT-related policies and doctrines are built on this foundation.

In earlier decades, the LDS position on homosexuality was consistent with that of most churches and most of society (and is still consistent with that of evangelicals, among others). The problem with that position is that science has increasingly had the say on what the basis of homosexuality is, and in a word it is this: BIOLOGY. The early “hunt for the gay gene” was a futile effort that sidetracked everyone and allowed some to declare victory over biology; but anyone who understood then the complexity of homosexuality—particularly the fact that there are many, many different flavors and they are not simply points along a line—should have known that its biological underpinnings would be equally complex. This is turning out to be the case, where the biology involves the interaction of genes (plural), epigenetics (the manner in which gene expression is regulated), and other environmental factors that are not yet completely understood, with the result being a biological imprinting that cannot be changed, no matter how violent and extreme the attempts. Yet, while science has pointed the way to biology, the LDS hierarchy has persisted in believing that homosexuality is simply behavioral. (The closest they have come to real movement is to concede that biology may be a factor, but then to say, “But that’s irrelevant, because you are still responsible for your behavior.” It’s like saying to an African-American, “You may not have chosen your skin color, but if you act on it you are a sinner.”)

I have never heard anything to substantiate this, but I suspect that deep within the psyche of some of the leaders resides this belief: LDS afterlife theology (at least as currently constituted) cannot accommodate gay. Period. If that is the endpoint of your worldview, then anything backtracking from there can’t allow homosexuality to be biological—that is, an imprinted, essential feature of one’s makeup. (One gay, LDS friend told me, “If it were only about sex, it would be easy. My homosexuality informs every aspect of my interaction with the world around me.”)

Although many or most of the senior church leaders are still of the Behavioral School, there are some who have come to accept the Biological School, and hence the mixed messages that continue to emanate from Salt Lake: Proposition 8 in 2008 (regressive); the Salt Lake City nondiscrimination ordinance in 2009 (progressive); Boyd Packer’s 2010 General Conference talk in which he attempted to canonize the LGBT-hostile Proclamation on the Family (regressive); Dieter Uchtdorf’s conciliatory speech two weeks thereafter (progressive); the Church’s silence in the face of same-sex marriage ballot measures in four states in 2012 (progressive when compared to its stance towards Prop 8); the January 2015 press conference announcing qualified church support for statewide Utah nondiscrimination legislation (mostly progressive); the March 2015 passage of SB296, a statewide nondiscrimination law in Utah (progressive, albeit with a large carve-out for the Church); the November 2015 announcement of The Policy (regressive); and now President Nelson’s proclamation (doubled-down regressive).

When you consider President Nelson’s options, it isn’t surprising that his tone is so forceful. Consider that any church has only two cards to play: truth claims, and moral authority. The Church largely lost moral authority on LGBT issues with the announcement of The Policy last November, so only the truth-claims card remains. President Nelson has played it with force, invoking apocalyptic imagery. Most of the church membership likely will accept his pronouncement without question, but others—and this is already apparent as one looks at the blogosphere—will not accept either it or the “Nuremberg Defense”: “I was just doing what my commanding officers ordered me to do.” I think there is still room in the Church for those who question, although not as much as in times past. Members stay for reasons beyond the men at the top, and those reasons continue to be adequate.

What lies ahead? I don’t know, but I can imagine two scenarios. One is that President Nelson will succeed in canonizing the policy, and then proceed to use it as a litmus test of fidelity—perhaps even inviting those who cannot accept it to leave. The other is that his colleagues will begin the lengthy and painful process of walking the policy back and getting the Church to a kinder, gentler place.

Nobody ever told me it would be easy to be a Mormon, but I had no idea how difficult it could become.

[Friend] I never expected being a Mormon to be easy either but I always expected that being Mormon would mean standing up for what’s right amid voices outside the church telling me otherwise. And even though that would be difficult it would be worth it because I would know inside that what I was standing for was right. I never dreamed that I would be in the church standing up for what I felt was right amid the voices in the church telling me that I am wrong.