Bernie and Brigham: Two of a Kind 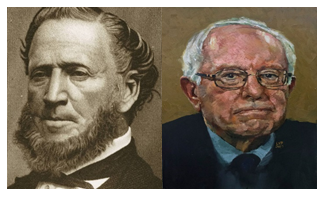 On Friday, March 18, 2016 I was up at This is the Place Heritage Park in the mountains above Salt Lake City, Utah attending the huge 14,000 person rally to hear Bernie Sanders speak. It was awesome, and a clear contrast to many Utah voters’ positions. Sanders, of course, is running for president, not as a traditional Democrat, but as a Social Democrat.

While there, I saw Bernie at the podium, juxtaposed against a great statue there featuring the head of Brigham Young, Mormon pioneer prophet. Gradually, I began to feel some impressive similarities between the two grand old men, both fighting for justice, both confronting the power of the establishment, both laboring against the wealthy, each in his own way.

I had been intrigued by BYU’s Daily Universe poll showing some 30 percent of students would vote for Sanders if the election were held in late February when the survey occurred. It was a shock to many Mormons, but not to me. The numbers fit the national trend of young Millennials supporting Sanders.

On March 22, Bernie trounced mainstream Democratic frontrunner, Hillary Clinton in the Utah primary caucus elections, 79 to 20 percent. In Idaho, which also has a huge number of LDS voters, the outcome was similar. Bernie trounced Hillary at about the same degree. In both states, the caucus turnouts were massive for the Democrats, forcing party leaders to keep running to local copy stores to print more ballots.

While up at the rally, I began to mentally develop a series of parallel issues that both men believed in their souls were valid political, social and spiritual perspectives. The Mormon scriptures that Brigham believed and his own prophetic teachings are clear. Yet perhaps many American Mormons themselves have not fully appreciated or understood these core values of their faith. But on March 18, during a warm spring afternoon, the common teachings between Bernie & Brigham were striking.

Below is my summary of similar values and beliefs that are quite different from today’s Republican Party rhetoric across the country:

Both leaders rail against the concentration of huge wealth in the hands of a few rich American families (saying as Brigham does that “One of the great evils with which our own nation” suffers is the “growth of wealth in the hands of a comparatively few individuals”). Bernie sees a similar danger, and he warns against the oligarchies of extremely rich dynasties like the Walton family, the Koch brothers, and others: “We now have a political situation where billionaires are literally able to buy elections and candidates. Let’s not kid ourselves: That is the reality right now.”

Schooling is seen as a high priority, not ignorance. Both leaders want citizens to be knowledgeable (Mormons teach that “the glory of God is intelligence”). Brigham established over 400 community schools in the settling of the West. Bernie wants more funding for better quality teachers and schools. He is pushing strongly for new legislation that will help university students have better terms for handling their school debt, and he also seeks to make a college education free for all Americans.

Bernie was one of the few U.S. leaders who voted against the disastrous Iraq War launched by George W. Bush and his buddy, Dick Cheney in 2003. He has always seen war as a last resort, in contrast to others who rattle their sabers first. In the 1800s, Brigham led his people west because of the war on the Mormons. He knew the dangers of conflict and what it was like to be attacked. So he sought peace, not only with other governments, but also reconciliation with Native Americans and other groups.

Brigham and Bernie both articulate concerns about the gap between haves and have-nots Mormon scripture declares: “It is not given that one man should possess that which is above another, wherefore the world lieth in sin.” Bernie says, “Today, we live in the richest country in the history of the world, but that reality means little because much of that wealth is controlled by a tiny handful of individuals. The issue of wealth and income inequality is the great moral issue of our time, it is the great economic issue of our time and it is the great political issue of our time.”

Bernie, the son of an immigrant father, values the rights of immigrants to America and will establish a comprehensive immigration reform plan to safeguard the rights of the 11 million undocumented workers in the United States today, and also the rights of Muslims in the U.S. and those from throughout the globe. Similarly, back in his day, Brigham called for people from around the world to immigrate to the U.S. and enjoy the blessings of living in American the West. Some 90,000 were accepted into the young American nation during those years.

Bernie condemns the evils of big banks and powerful corporations on Wall Street that brought America to its knees in the recent Great Recession. Likewise, Brigham was concerned about the “priceless legacy” of democracy and warned that we “are endangered by the monstrous power” of big business that threatens good government and legislative ethics. Instead, both men would seek to not allow firms to grow into “too big to fail” sized growth, instead preferring small, entrepreneurial business practices that would generate jobs for the masses.

Brigham was an advocate for appreciating God’s creations, protecting nature, appreciating “the sweet mountain air” and pure waters. “Keep your valley pure, keep your towns as pure as you possibly can, keep your hearts pure, and labor what you can consistently.” Likewise, Bernie warns of pollution, such as the dangerous contamination of Flint’s city water crisis, and he seeks to preserve wilderness and deal with pollution and the effects of global warming.

Both Brigham and Bernie can be clearly classified as feminists. Back in his day, Brigham was an unusual advocate of women’s rights in the 1800s, encouraging LDS women to be part of the national suffrage movement. He pushed Utah’s territorial legislature to give women the right to vote in 1869, which led Utah to becoming the second state in the nation to do so. Along with Wyoming, legislation was passed to enable female voting in subsequent elections. Today, Bernie is against the Republican war on women, declaring he will not retreat from the fight for women’s rights. He promises to increase their status on such issues as equal pay, paid leave after delivering a child, more daycare, and to protect women from domestic violence and sexual abuse, and so on.

Today’s GOP candidates mostly reject science, even bragging how they can alter school texts in public schools, while denying climate change and many other truths. But Brigham Young had no hostility toward science, a different view. He embraced new technology such as the telegraph and railroad while many politicians and religionists of his day viewed such inventions as tools of the devil. Similarly, Bernie believes that climate change is a serious challenge facing the world. He believes it is real, is caused by human activity, and it threatens the environment and our way of life. In contrast to less educated Americans, even conservative Mormons, he believes vaccines are an effective deterrent to dangerous diseases. Bernie is all for more technology, and believes we need to do more research that improves human life, eradicates bad diseases, not just spend our capital on space exploration when we have so many needs here on earth.

These Mormon teachings from Brigham Young, when he first arrived at what is now This is the Place Heritage Park in the pioneer wagons of 1847, have been consistent themes of LDS leaders until today. As a Professor of Management at the Marriott School, Brigham Young University for nearly 40 years, I have researched, published articles and books, as well as taught my MBAs and undergrad students the radical principles promoted by he who Mormons affectionately refer to as Brother Brigham. Using these quotes in hundreds of power point presentations and LDS firesides, I have encouraged my students through four decades to more deeply study their religion and then vote according to Mormon gospel principles. I have found that these precepts abound in the Bible as well in the materials of many other faiths beyond Mormonism, including Bernie’s own religion, Judaism, as well as other Christian traditions, Islam, Buddhism, and so forth.
In the coming months leading to November’s presidential election, I hope Mormons of various political parties across the nation, not just here in Utah, will consider Bernie Sanders, the authentic leader. Remember the faith of Mormon pioneer forebears when voting.

Warner Woodworth is Professor Emeritus at the Marriott School, Brigham Young University. Photo immediately above is from the Sanders’ rally at This is the Place State Park in the hills above Salt Lake City, Utah on March 18, 2016. This was the location when the first Mormon pioneers came down Emigration Canyon and entered the valley in 1847. The views expressed are his alone, not necessarily those of BYU.

All posts by Dr. Warner Woodworth