Beardliness is Next to Godliness: Win Some Sweet Booty for that Prophet Beard 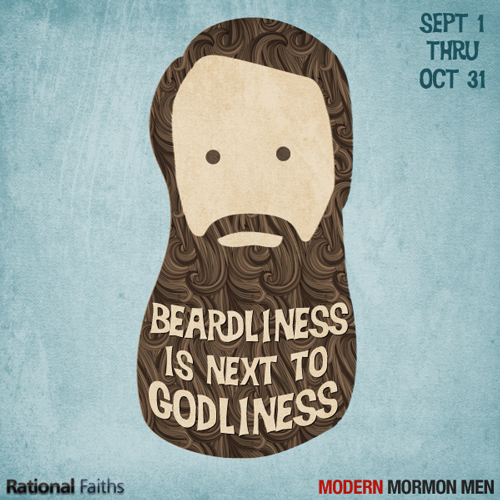 Beardliness is next to Godliness

Rationalfatihs.com and Modern Mormon Men are launching the contest to end all contests, starting this September.

Before we begin, lets think about what we know about our Heavenly Father. We know he is all powerful and all knowing. We know he loves us. From prophetic accounts and artistic depictions, we also know he has a beard, and we know he sent his bearded son to die for us. In other words, beardliness is next to godliness.

I am sure that this has been something that prophets throughout time have struggled with. Some may have wanted to emulate our Heavenly guides by growing beards. Some perhaps have felt unworthy and decided to make a subdued effort, decorating only regions of their face with facial hair, thus attempting to show their humility before God. Some have completely shaved their face, maybe to delineate the separation between man and his Creator. The collection of various attempts has left us with quite the gallery.

Which brings us to the competition: Starting September 1st,  we are launching a beard growing contest that will go until October 31st.  A picture must be taken on the first day, with some sort of evidence to indicate the date- a date display on the picture, a newspaper from September 1st in prominent display, or anything that proves the date.  On the final day of the contest, participants will shave their facial hair into a style that is similar to any Latter Day Saint apostle or prophet, and then will submit a final picture (also with some evidence to indicate the date) and a name for the style. We will limit ourselves to this dispensation, because this is only a 2 month contest, and we don’t have a lifetime to grow a ‘Moses’ beard. In other words, shave your face and give it a name- “The Wilford Woodruff”, “The George Albert Smith”, “The Early Lorenzo Snow with Awesome Sideburns“, “Older Pointy Bearded Lorenzo Snow”, “The Heber C. Kimball Combover Sideburns Combo”…you get the drift.

We’ll post the final pictures, with the winner being decided by the number of votes received. The person with the most votes will be awarded $100 in cash, a Sunday School or Illustrated Mormons print from Scott Heffernan, and a Rational Faiths sticker. That’s some good prizes to look totally awesome and be the envy of all of your friends! The more who participate, the more fun we will have. Let the beard growing begin!

Email entries to paulebarker (at) yahoo.com

Exciting news!!!  We have decided to have two categories: