Banishing The Cross: A Book Review 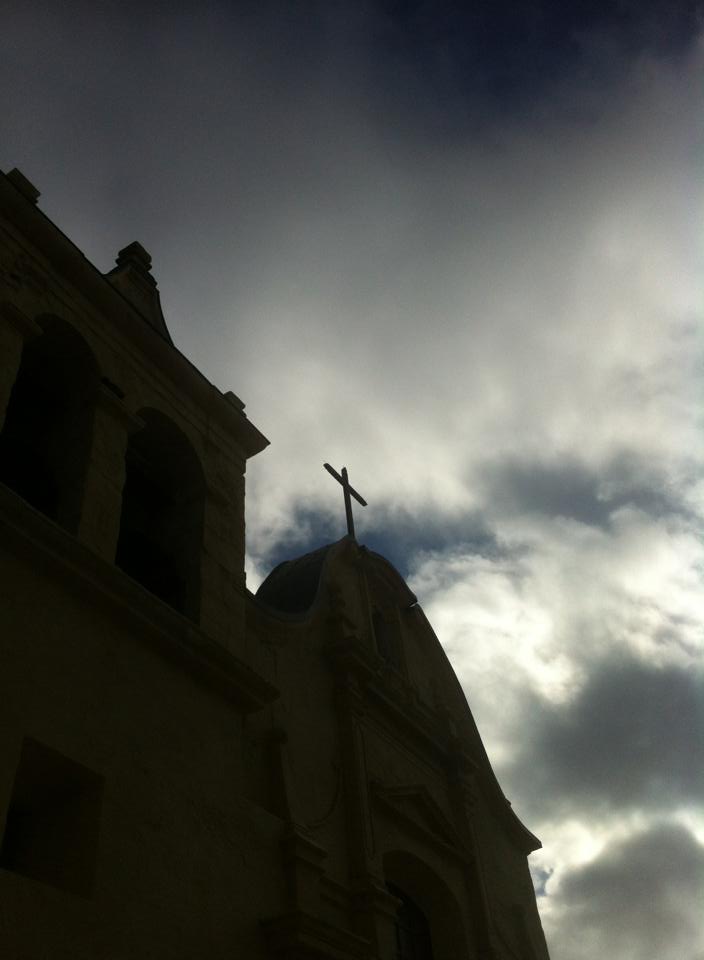 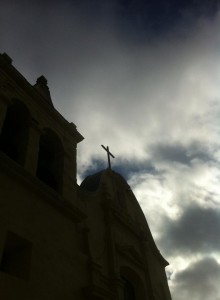 Between growing up Protestant and eventually joining the Roman Catholic Church, the cross and the crucifix have always been part of my life. I assumed that it was a part of all Christianity. When I met my now-husband and was introduced to the Church of Jesus Christ of Latter-day Saints, I was surprised to learn that this is not the case, that Mormons do not usually like to wear or focus on the cross or the crucifix. I had quite a few conversations on this topic with my husband, attempting to understand the aversion and to explain why I personally loved and appreciated the symbols so greatly. I told him “To me, it’s not about focusing on an instrument of torture and death to the exclusion of thinking on the resurrection and the fact that He lives. To me, it’s a reminder of all that He suffered so that I may have eternal life, and that if He could bear all of that, I can bear the comparatively small sacrifices that are asked of me as a Christian in modern day America. The cross and the crucifix remind me that He didn’t stay down but that He rose again and that He lives today, of the eternal life that He gave me, and of the promises I’ve made to follow Him and try to become more like Him.”. It may not have been quite that eloquent at the time but that is the gist of what my end of the conversations boiled down to.

Eventually I became a member of the Church of Jesus Christ of Latter-day Saints, but I have always continued to wonder about the fact that the cross is absent from Mormonism. To me, the absence has been conspicuous; I still occasionally like to go sit in a Catholic church to pray and to contemplate the crucifix; I still like to wear a cross necklace that was a gift to me at my high school graduation. It is a topic that has always been skirted around when I’ve asked about it during Sunday School or in discussion with the missionaries.

Given that I have wondered these things so often over the last few years, I was delighted when a friend came to me and asked if I would be interested in speaking with someone about reviewing a book on the very topic of the LDS view of the cross. My friend, knowing that I am a convert from Catholicism, pointed me in the direction of Mike and Paul Barker, who arranged to have a copy of Michael G Reed’s book Banishing the Cross: The Emergence of a Mormon Taboo (published in 2012 by John Whitmer Books) sent to me for review.

In his book, Reed uses LDS history and American religious history in general to examine not only the reasons for what he calls (the) “Mormon taboo” towards the cross but the perceptions that the Mormon avoidance of the cross can give to those who are not LDS. He examines some terminology, cites many different sources, and dives enthusiastically into tackling this tricky subject that, even in the most calm and laid-back of discussions, can be the source of very lively debates.

Reed opens his book by diving right into one of the major issues that the Mormon aversion to the cross often causes: doubt from other Christians as to whether or not members of the Church of Jesus Christ of Latter-day Saints are Christians. He sums it up beautifully with his opening phrase “Evangelical and Fundamentalist Christians frequently argue that members of the Church of Jesus Christ of Latter-day Saints are ‘not Christian,’ in part because of Mormon opposition to the symbol of the Cross” (1). From the perspective of a Protestant-turned Catholic-turned Mormon, this is true. I won’t say it’s true for everyone, because I don’t know everyone, but it’s true for many people I have encountered throughout my life and, I’m sorry to say, used to be true of me back in my “ignorant of what Mormonism actually teaches” days when I thought that Protestants (and then Catholics) had a corner on the “Truth market”, so to speak. Imagine that you can hear me sighing and rolling my eyes at my former self…

In the introduction, Reed goes on to do an admirable job of summing up the rest of the book. My English teacher from my first semester of College would, I hope, be proud to know that I practiced “active reading” by reading Reed’s book multiple times. The first time just to gain an overview, and then with an eye for the points I wanted to address. When I finished reading the introduction the second time around, I actually had the thought that, between the introduction and the conclusion, Reed practically wrote his own critical review essay. Both of these sections are quite good and I think the book is worth buying just for those two sections alone. As an example, something that I like in the Introduction is that Reed lays out some notes on terminology, defining the differences between symbols and depictions/descriptions and why these differences are important to note. Reed also gives a brief introduction to the three groups under “the umbrella of Mormonism” (6) that he takes into consideration throughout the book.

Reed begins his book by delving into the beginnings of Mormonism, laying out some of the secular and religious events and attitudes that were going on in America beginning in 1783. In his first chapter, Reed discusses some religious history, including the decline of the Anglican and Puritan denominations due to associations with the understandably unpopular King of England. Reed also gets into the religious beliefs and history of Joseph Smith’s family, finally discussing Joseph Smith’s vision that led to the establishment of the LDS Church. He goes on to briefly cover some Mormon history and some of the waves it made, including the adoption of the practice of polygamy, which shocked the non-Mormon portion of America, and eventually “a long process of enthusiastic assimilative movement into the American mainstream” (26). I feel that this chapter is especially important for readers of the book to familiarize themselves with some pertinent history, to include the events that shaped Joseph Smith’s formative years and the beginning of Mormonism.

Throughout the rest of Banishing the Cross, Reed examines the complicated attitudes and relationships that surrounded Catholicism, Mainstream Protestantism, Mormonism, and the cross. He touches on the relationship between Freemasonry and Mormonism and the fact that Mormonism has not always been adverse to the cross, including a number of old photographs from pages 80-83 of Mormons wearing the cross as jewelry; in chapter six, there is the interesting story of the proposal in the early 1900’s that, as a monument to the memory of the original Utah Mormon pioneers, a cross be erected on Ensign Peak.

From here on out, Reed continues on to address the “Mormon taboo” that emerged, and it’s reinforcement. In chapter nine, he gives statements from a number of Church authorities who made clear their position against the use of the cross, including quotes from such LDS notables as Joseph Fielding Smith, Gordon B. Hinckley, and Bruce R. McConkie. Reed also points out a fact that I did not know before reading Banishing the Cross, that after the intercession of the LDS Church, the Veterans Administration approved a Mormon emblem (angel Moroni seal) for use on the grave markers of Mormon veterans who request the Mormon emblem instead of the cross.

It also bears noting that in Chapter 10, Reed touches on the Strangites (a remnant of LDS faithful who chose to follow James Strang after Joseph Smith’s death rather than Brigham Young), the Community of Christ (formerly the Reorganized Church of Jesus Christ of Latter Day Saints, a group which followed Joseph Smith III, Joseph and Emma smith’s son), and the attitudes of both towards the cross; the majority of the focus, though, is on the Community of Christ.

In the conclusion, Reed brings us to his thesis (which is clearly stated in the first sentence) when he writes “The Mormon cross taboo had the same basis as the nineteenth century Protestant rejection of the symbol: a desire to disassociate themselves from the Catholic Church” (145). Reed makes a strong case throughout the entire book for this thesis, especially with the quotes I previously mentioned from various Church authorities.

I started reading Banishing the Cross with the hope that I would be able to come out of reading Reed’s book with answers to the questions that I have so frequently pondered regarding the distance the LDS Church holds from the cross. I am cautiously optimistic that I have those answers, although I hope to do some more investigation of the sources cited in Reed’s book. I have certainly come out of it with more knowledge than I had going in, which is always a plus.

Overall, this book is highly informative. Reed has clearly put a lot of time into his research and establishing his views. He cites a great number of sources from a variety of perspectives, as opposed to only citing sources that would support his thesis. It is the sheer number of sources and references that made this book a little difficult to wade through on occasion; it seemed like literally half of quite a lot of the pages were taken up with quotes and with references/citations. While I certainly appreciate the amount of research that Reed did, sometimes it felt like reading more of other peoples words than of Reed’s. In the spirit of honesty, I must also admit that I found the book a little bit dry and difficult to plough through at some points, but that may be because I’m not a great academic scholar. I did appreciate the stories and pictures used to illustrate and support Reed’s points and, as stated, was happy to see a number of sources that were from within the Church used in a positive manner; too often, books examining LDS culture or teachings can be extremely anti-Mormon and this book didn’t come off that way to me. And, as I stated earlier, this book is worth buying if only for the introduction and the conclusion.

Overall, this book was a good read for me. I’m glad to have such a comprehensive source to refer to in the future for questions regarding Church history and LDS beliefs regarding the Cross.