Are Children Supposed to Enjoy Church?

It’s 1993, I’m six years old, and I’m sitting in the pews listening to a speaker in Sacrament meeting. I’m not sure I can take it anymore. My parents have made it very clear that I must sit still. My attention span ran out about 10 minutes in (my adult attention span is not much longer). I look over and see my friend Sam in the pew next to us, playing with Ninja Turtles. Why have I not thought of this? After church I tell my mom that I am going to bring my Ninja Turtles next week. She says, “No. We need to be good and pay attention during church.” Great. I can’t wait until next Sunday. Not.

It’s 2015, I’m sitting in the pews listening to a speaker in Sacrament meeting. I’m not sure I can take it anymore. My three year old son is alternating between kicking the pews and attempting to escape under them. I grab his leg as he is crawling under, he extends his arm as far as it will go and grabs a piece of Captain Crunch that appears to be from the time of the Pioneers. I grab his arm to stop him but I’m too slow; he sticks it in his mouth. He turns to his Mom and yells, “MOM! CAN I PLAY ANGRY BIRDS?!?” She says, “Shhh!!! We have to be quiet!” He repeats back in a loud whisper, “MOM! CAN I PLAY ANGRY BIRDS?!?” She says, “No. We need to be good and pay attention during church.” He begins kicking the pews again. My wife can’t take it anymore, and she turns to me and asks for my tablet. She opens up a kids app that prevents him from getting into other parts of the tablet. She hands it to our son and he presses the Angry Birds app. It begins blaring the Angry Birds theme music. She grabs it back and begins pressing the volume buttons but the kids app prevents changes in volume. She hurriedly enters the password and finally turns down the volume, in what feels like several minutes. After church I ask my wife what she thought of the talks in Sacrament meeting. Neither of us have any idea what they were about.

We’ve been to churches where they have classes for kids during the main adult meeting. Our son usually has a great time and we have an awesome break. In the Mormon Church we have a different philosophy. A philosophy of child torture. The talks aren’t designed for children. We’re lucky if they have been designed at all; most ward members are not known for their speaking skills. While the talks are often torture for me, they are even more so for my three year old. At least there is Primary the other two hours, right? 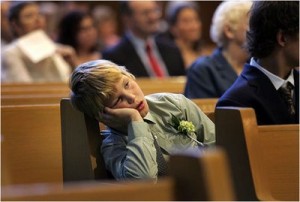 We drop off my son at Primary and we go to Sunday School. He turned three right before the beginning of the year so he is the youngest in his Sunbeams class. We get 15 minutes into Gospel Doctrine and his teacher shows up at the door. I walk over and she whispers to me that our son needs to go to the bathroom. Apparently the teachers aren’t allowed to take him. I take him in and sit him on the potty and he doesn’t do anything. I take him back to class. 10 minutes later his teacher shows up again at Gospel Doctrine. She says our son needs to go potty. I take him to the bathroom and sit him on the potty and he doesn’t do anything. “They’re going to stop believing you when you say you need to go potty,” I say. I take him back to class and tell the teacher that he is faking. At the end of church we go and pick him up and get his scribbled drawing. “It’s our family,” he tells us. I’ll take his word for it. We ask his teacher how he did in class. “He had to sit on my lap because he was having a hard time sitting still during Sharing Time.” Apparently Primary is just more child torture, they sit for two hours with short breaks in between.

Is it really all worth it? Is my son getting anything out of this? Are there really enough benefits to outweigh all of the work required? Should we switch churches so that we can go somewhere where they actually try to tailor things to children? This is a serious debate that I’ve been having with my wife. She feels that church is good for him. I say that it might or might not be good for him so we should look for a church that is willing to work a little harder. This is without getting into any debates about whether the Church is going to turn our son into a racist, misogynist, homophobe. Sure there are some nice teachings about being kind to others, etc. But can’t he get those somewhere else? Where he will also have a better time? 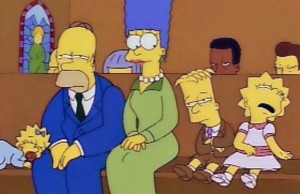 It’s time for the church to modernize its approach to children. I know we are a conservative, slow moving church. We’re still singing 19th century Protestant hymns and preaching against the evils of biological evolution. And I might be able to handle that. But please, think of the children. Here are a list of potential suggestions:

I’m sure there are many more good ideas. I am no expert on child development and education. However, if there’s one thing the church is good at it is forming committees. Let’s get some innovative professionals who are willing to shake things up, put them on a committee for improving Primary, and let them do their thing. Children around the world will thank you. And their parents.