An Open Letter to the General Primary Presidency 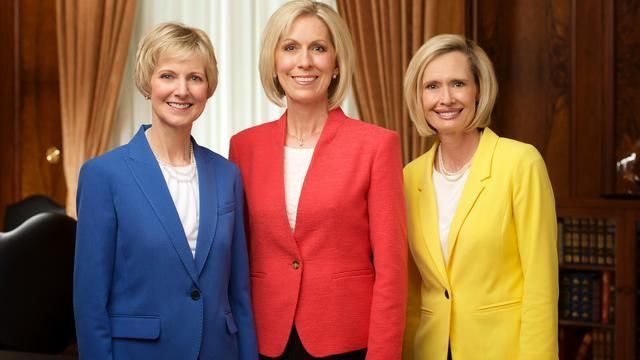 My wife and I are the parents of a ten year old daughter.  We were excited and saddened to learn about this past Sunday’s lesson in Primary about modesty. The lesson was entitled,Dressing Modestly Shows Respect for Heavenly Father and Myself. (for those reading this letter click on this link to review the lesson manual).  We were excited because we believe modesty is important and children, especially girls, should dress modestly.  We were excited because the For Strength of Youth pamphlet, which is intended for our twelve to eighteen year-old youth, was used to teach the principle of modesty to pre-pubescent children.  We were saddened because perhaps the lesson could have gone further.  Allow me to explain.

Several pictures were used to explain modesty. One of the first pictures shows several things children can DO to take care of their bodies: 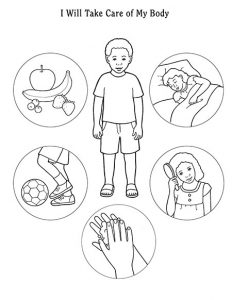 We believe this picture didn’t go far enough.  Here are some suggestions that could have been added to the picture:

The second picture from the lesson was obviously influenced by For The Strength of Youth  which states under the heading, Dress and Appearance:

“Young women should avoid short shorts and short skirts, shirts that do not cover the stomach, and clothing that does not cover the shoulders or is low-cut in the front or the back. Young men should also maintain modesty in their appearance.” 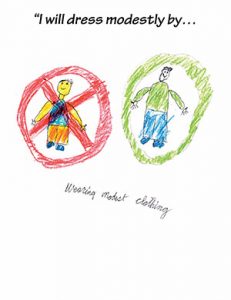 Here we see a young person (the gender is ambiguous which is a problem) wearing a tank top and that picture has an X drawn through it because that child is wearing an immodest top. The picture with the green circle shows a child with a shirt down to their wrists; this is modest. This is an important thing to learn at a young age.  For not only do young men and adult men have trouble keeping their thoughts pure around young women and adult women, some teenage boys and adult men have difficulty keeping their thoughts pure around pre-pubescent girls. So cover up those porn-shoulders please!!  Modest is hottest!!!

These next pictures were also appreciated by my wife and me. 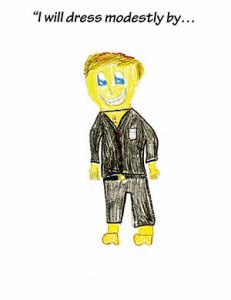 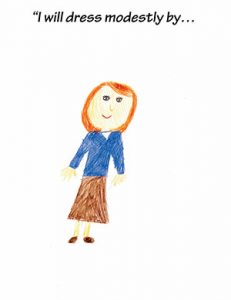 On the left we see a young man (possibly a missionary with a name tag on his left breast?) wearing a dark colored suit.  If this young man is a missionary, we are safe to assume the young woman in the long brown skirt and  long-sleeved blue blouse is a sister missionary.  I believe that you have heard of parents encouraging their Primary-aged daughters to dress, “temple-ready.”  That is, they have their daughters only wear clothing that will cover up their future temple garments.  My wife and I have taken it a step further.  We figure, “Why wait?”  So we have bought Spanx for our ten year old daughter to wear under her clothing.  It’s never to late to learn.  Am I right?  But these two pictures take our modestly teaching a step further and for that we thank you.  Not only should our children’s dress be “temple-ready” it should be “missionary-ready.” Mission standards are inspired, so waiting to live them until you’re on your mission is like returning a gift from Heavenly Father with a note saying “no thanks God, I’m good without your blessings.” So we will now have our daughter only wear long dresses and long-sleeved blouses. Thanks for the great idea. But there is even more you could encourage us as parents to do based upon the “missionary-ready” model.

It’s never too late to start and modest is hottest. Besides, doesn’t verse 27 of the 58th section of the Doctrine and Covenants teach:

“For behold, it is not meet that I should command in all things; for he that is compelled in all things, the same is a slothful and not a wise servant; wherefore he receiveth no reward.”

And who wants a  slothful child?

The Primary lesson on modesty states:

“Discuss what dressing modestly means (see the “Dress and Appearance” section of For the Strength of Youth).”

In speaking about For the Strength of Youth, my wife and I have a ton of great suggestions. Not only will these suggestions add to the spiritual well being of the Church’s Primary children, it will help the Aaronic and Melchizedek Priesthood holders keep their thoughts clean and pure when they are around pre-pubescent girls and later when they are of YW age (this is the reason that the young women are now required to wear t-shirts over their bathing suits at many Church girl’s camps nowadays ,right?), and it will allow those Primary children who keep our recommended standards to  justifiably judge those children who don’t follow the standards laid out for teenage girls and boys. We need to take For the Strength of Youth (which as stated earlier is for those between the ages of twelve and eighteen) and go beyond the mark.

In For the Strength of Youth, under the heading Dating it states:

“You should not date until you are at least 16 years old. When you begin dating, go with one or more additional couples.”

In  For the Strength of Youth, under the heading Dress and Appearance it states:

“Young men and young women should be neat and clean and avoid being extreme or inappropriately casual in clothing, hairstyle, and behavior.”

In  For the Strength of Youth, under the heading Entertainment and Media it states:

In For the Strength of Youth, under the heading Language it states:

“How you communicate should reflect who you are as a son or daughter of God. Clean and intelligent language is evidence of a bright and wholesome mind.”

Sisters, my wife and I hope you take our suggestions, not as condemnations, but rather as love.  We feel that if we are able expand what was taught in Primary regarding modesty, that our children will be able to fight off Satan and will have more tools to judge those children who don’t keep this long list of modesty standards.

Now one might argue that this focuses too much on the outward appearance.  And such people will most likely quote 1 Samuel 16:7 which says:

But we can disregard this scripture because it is in the Old Testament and was written for Jews and the Book of Mormon teaches this about Jews in Jacob 4:16

“But behold, the Jews were a stiffnecked people; and they despised the words of plainness, and killed the prophets, and sought for things that they could not understand. Wherefore, because of their blindness, which blindness came by looking beyond the mark, they must needs fall; for God hath taken away his plainness from them, and delivered unto them many things which they cannot understand, because they desired it. And because they desired it God hath done it, that they may stumble.”

Besides that scripture being for a stifnecked people, it was addressed to Samuel, who was a Jew, or a Lamanite. It doesn’t really matter. Both were wicked people.

Your Brother and Sister in the Lord,