Addressing The Black Elephant In The Room 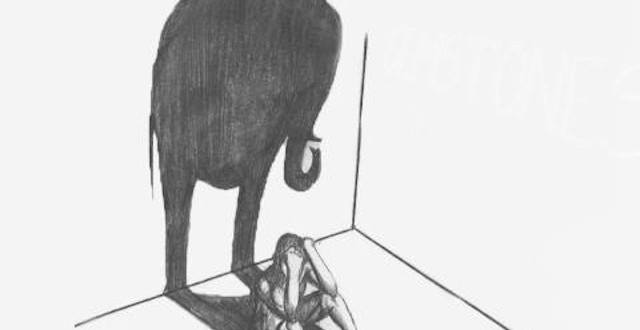 This essay first appeared on Janan’s blog, A Life Diasporatic.  Please click on THIS LINK to visit her blog and read her other wonderful essays.

Addressing The Black Elephant In The Room

In the time since my baptism, there has always been a black elephant in the room, that is, the topic of the effect of the priesthood-temple ban on people of black African descent. It looks on in silence as I interact with my fellow Church members. Its presence fills me with a fury that is both ignited and quelled by a faith that I love. Last Friday, its eyes began to pierce through the room that had been its haven for so long. By Sunday morning, I had realized that its presence could no longer go unspoken. With the Church’s statement on race and the priesthood came countless blog posts and internet threads. Many detailing the difficult nature of that part of Church history and what it meant as far as the nature of revelation by those we hold to be prophets, seers and revelators. The statement took me back to the conversations I’ve had with members and non-members alike about the 1978 revelation, the effects the priesthood-temple ban had on members of black African descent and the times I was told by white people that white people just weren’t ready for change. This topic is about black people and yet various commentators have directed the conversation to a conversation about white people or co-opt the prevailing attitudes and rhetoric towards black people to the oppression faced by women and those who are members of the LGBTQIA community. I have no doubt of the inequalities that exist for both women and members of the LGBTQIA community. At the same time, these oppressions are not interchangeable and only serve to ignore intersectionality within sexism, homophobia and transphobia. In talking about LGBTQIA rights and equality for women, where are the discussions on Cece McDonald and the higher rates of violence towards queer and transgender people of color or the intersection of class and race in terms of marriage equality? Where is the uproar for Renisha McBride, how women of color are disproportionately affected by domestic violence or how minority women are paid less than white women? Yet there is an urgency to appropriate the struggles of black people within the Church and ignore the fact that this topic is not about white people.

In future discussions about the statement on race and the priesthood, my hope is that two things occur. First, recognizing the significance of the comments by General Authorities about race and interracial marriage, this statement and the 1978 revelation itself. For over 100 years it was taught that there was something inherently wrong with people of black African descent. So much so that it disqualified us from sharing the same eternal blessings as everyone else in the Church. Both the 1978 revelation and this statement are a reconceptualization of long standing notions of black identities within the Church; something that people of black African descent have known all along: that we are people. We are not cursed. We were not less valiant in the pre-mortal life. We praise the same God as other members within the Church. Our creator made us this way. And it took over a century to be recognized as capable, spiritual beings. It was a difficult period for us as a people. Yet many of us stayed because we found strength through a creator who loved us more than we could ever begin to imagine despite the insistence by man that we were not worthy of basking in all of God’s glory. In a gospel that teaches that in the face of adversity and oppression, that we must learn to forgive. Here we stand at the precipice, shouting that we are here and we have always been here.

But why isn’t anyone listening?

My other hope is we discuss the definition of racism and separate ourselves from the idea that racism is an individual problem opposed to an institutional one. Racism is not a few hurtful words, it is a type of oppression rooted in power, privilege and prejudice. The combination of the three provide the basis for the belief that a particular race is superior. While people of color can certainly be prejudiced and discriminatory against white people, they have not had the same institutional power that has historically been held by white people. With racism comes the term white supremacy, any action or belief established to perpetuate ‘white’ as the standard while subsequently erasing people, beliefs and cultures that deviate from it. The reason why what President Young’s comments (as well as those made by President George Q. Cannon and Elder Bruce R. McConkie, among others) on race and interracial marriage were indicative of white supremacy and indeed racist is because their comments served to uphold white as the standard of purity and righteousness while subjugating the existence of black bodies as ‘cursed’ and unworthy of complete salvation. The scriptures do not specify that the ‘seed of Cain’ were marked with a curse of ‘black African skin’ yet people of black African descent were the only ones singled out for being unable to hold the priesthood and participate in all temple ordinances. I’m troubled by the idea that racism or white supremacy no longer exists, particularly in the Church as an institution or its culture. It’s difficult to look at a directory of the General Authorities and Auxiliaries without wondering why there are so few people of color or going to a temple and seeing a portrait of the savior surrounded by all white angels, without wondering how deeply rooted this ‘othering’ rhetoric of black people and people of color was and is.

We as a collective body are only at the very beginning of addressing the black elephant in the room and I hope subsequent discussions on race focus on its presence.