Absurd Moments in Mormon Art, Part 3: Gird Up Them Loins 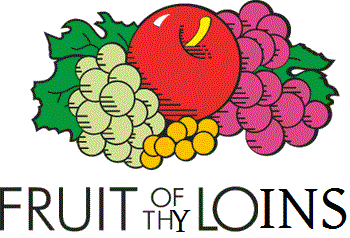 The word of the day is…Loins. Loins. Loins. Loins. Does anyone else find this word gross? The word loin specifically refers to the region “below the ribcage, extending to the pelvis” (thank you Wikipedia), but has common usage as a reference to…well, you know.  Definition aside, it just phonetically feels nasty.  Also, the expression ‘fruit of thy loins’ just doesn’t sit well with me. I understand the idea, I don’t feel comfortable calling my children the “fruit of my loins”. When my kids are old enough for me to attend a Parent-Teacher conference at school, I will make sure to thank the teachers for taking such good care of my loin fruit. I will then see how long it takes for the security guards to escort me out.

So, about these loins: the scriptures have commanded us to gird them. The phrase, “gird up your loins”, is not simply a call to cover up your junk, even though we’d all like you to. It is a clarion call to put some metaphorical armor on and head into spiritual battle. This post will be a look into the battle gear of the Book of Mormon as it has been represented in church art.

Throughout the Book of Mormon, the Nephites frequently and diligently girded their loins. They wore suits of thick, durable armor that resisted the attacks of the Lamanites countless times. As I have mentioned previously, there is no known archaeological record of the Nephites, so many artists who are painting the Nephites are creatively interpreting the scripture. In the current body of art, we only have 2 major categories of how this armor could have looked.

First example: In Alma, the Nephites and the Lamanites were at war. The Nephites, led by the gallant Captain Moroni, were given thick quilted armor to withstand the blows of the Lamanite weapons. Here is one artist’s rendition:

This looks to be thick gold-colored polyester. Moroni’s armor is adorned with prehistoric seashells and a predecessor to Brachs Peppermint Candy. 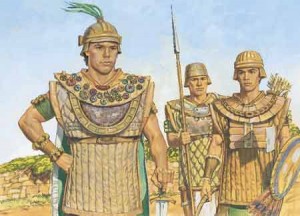 After adorning his men with random chest belts and cooking aprons, he gave them 80’s Tupperware to protect their precious noggins from incoming arrows.

Second example: The other approach to Nephite art comes from a less conventional source. I have always been curious about Friberg and his renditions of Book of Mormon heroes. Friberg’s art is so unique that it almost deserves its own post. Friberg was really, really talented. He painted passionate scenes that captured our imaginations. But when you actually look at what’s going on with his paintings, they are so fantastical they are almost absurd,  and full of some serious anachronisms. Like I said, no big problem, because really, who knows what it all looked like? Maybe Roman helmets actually first appeared in North America somewhere. Who am I to say they didn’t? 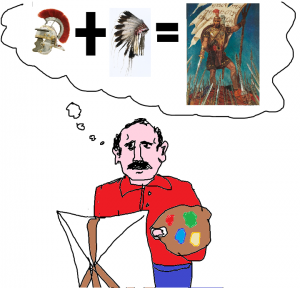 I guess it makes sense…somehow…

Friberg’s Nephites are heavily armored with the best armor that the world had to offer at the time. One might wonder where they got such a varied mix of armor styles… 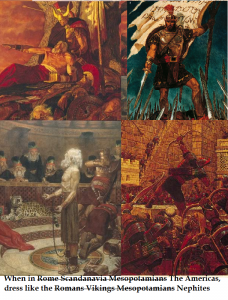 Roman helmets, Viking horns, Roman claymores- Honestly, I have decided to  explain away all the anachronisms through rips in the space-time continuum. It’s the only thing that makes sense. And can we forget those awesome armbands that Moroni, Mormon, and everyone else seems to have on? Someone was probably watching a little too much Space Ghost.

In most Mormon art, The Lamanites, on the other hand, seem to have completely missed the memo. Most of the time, they just girded their loins, and forgot about the rest of their body.  There is a scriptural basis to this. A Book of Mormon prophet, Enos, describes the Lamanites in the following manner-

[They were]   feeding upon beasts of prey; dwelling in tents, and wandering about in the wilderness with a short skin girdle about their loins and their heads shaven; and their skill was in the bow, and in the cimeter, and the ax. And many of them did eat nothing save it was raw meat; and they were continually seeking to destroy us.

This sounds a lot like some of the kids I met at Scout Camp. Anyway, I am sure that when Book of Mormon artists were given the opportunity to draw Lamanites, they were probably thrilled. I have to give it to Friberg and his contemporaries- drawing Nephites is a complete grab bag. Since we have no idea what they looked like, and almost a thousand years of inhabitance of a new area could call for some creative fashion decisions, Nephite fashion is complete guesswork. But Lamanites- how many ways can you draw a loincloth?

A quick Google Image search of the word ‘Lamanites’ will yield a variety of artistic interpretations of what the Lamanites would have looked like. Some look a bit like Native Americans. As a matter of fact the first image that pops up is the following- 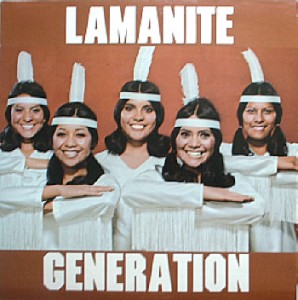 No, no commentary here. The picture says it all. 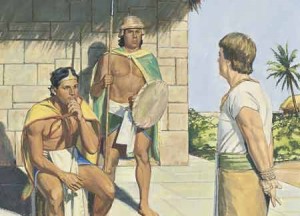 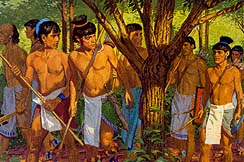 Lamanites, ready for battle. Or ready to sumo wrestle. 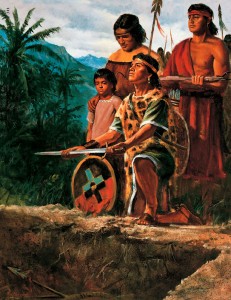 These former Lamanites are taming their manes into mullets. The first step towards a holier existence.

So, in the end, it doesn’t matter if you are girding yourself with a loincloth, a magnificent bronze suit of armor, a costume from your ward pageant closet, or sweatpants- the point is, us humans, we have loins. We’ve always had loins, and we will always have loins. So gird them, please. For everyone else’s sake. Nobody wants to see that. Also, the home teachers will be here in a few minutes.