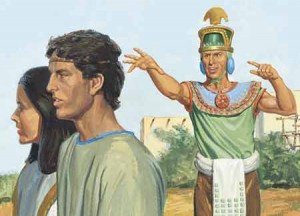 Dude, get out of here! Mullets are so last month! Blue earmuffs are in now!

In 1986, President Ezra Taft Benson gave his classic talk, ‘The Book of Mormon- the Keystone of Our Religion’. He emphasized the importance of reading, studying, and becoming familiar with the stories and messages that the book contained. The importance of the Book of Mormon in our religion is indisputable- it is one of the most unique things about our faith. The thing is, we’re not exactly sure where the Book of Mormon takes place. We’re pretty sure it was somewhere in the Western hemisphere. A quick look at Wikipedia shows about a million hypothesized locations of the Book of Mormon, among them Malaysia, Africa, Alpha Centauri, and inside of a snowglobe held by an autistic boy. The most fun bit about all of this is the fact that, as much as we’d like to, we have no idea what any of the Book of Mormon scenes actually looked like. This has prompted some very imaginative guesses.

Almost every modern copy of the Book of Mormon contains the  drawings of Arnold Friberg, who gave us a face, a pair of monstrous biceps, and a mullet to go with every Book of Mormon prophet. He is considered by many to be the premier Book of Mormon artist. But Friberg’s fantastical images of  Book of Mormon scenes are not alone in the artistic world. There are quite a few Mormon artists that have attempted to help us visualize the Book of Mormon: a daunting task that requires a fair amount of creativity. For the next few articles that I publish, I want to look at the way artists portray characters from the Book of Mormon. We’ll look at what insights we can gain and what truths we can uncover as we look beneath the surface of the art that we use in the church. We are going to start this series with guns blazing: The artistic portrayals of the Antichrists and Apostates of the Book of Mormon.

Lets start with Nehor. Nehor was an opportunistic, immoral guy who is considered to be, according to historians, a proto-televangelist. He would wear flashy clothes, preach about his awesomeness, and tell people that they could do whatever they wanted. His rantings were noticed by the authorities and he was presented before them. 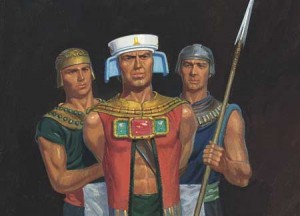 So lets talk about what everybody notices when they first look at this picture- the punched-in-the-face expression of the guy to the left. No, just kidding. I’m talking about the aerodynamic dogbowl/sailor hat combo with gigantic bluish earflaps that Nehor has on his head. And look at that bling! Those humungous gems make me crave Jolly Ranchers for some reason. Nehor was tried for blasphemy, and ultimately killed, but I am sure his absurd fashion choices were mentioned at least once during his trial. 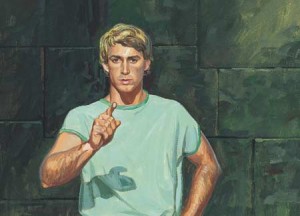 “See, Nehor? This happened last time you tried to dress yourself!” says Alma the Younger (A.K.A. Ryan Gosling) as he wags his finger unnaprovingly.

Here is another artistic representation of Nehor that I found. 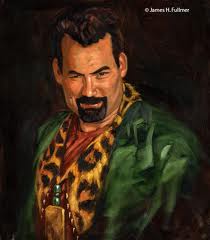 “God wants me to be rich…so buy Oxy-Clean, baby! How else can I afford these leopard skin vests?” Failed to mention that Nehor also owns a pawn shop.

Moving on, we find Sherem. Sherem was also an anti-Christ. We know this because of his massive bling and bowl like, useless hat. This story plays out wonderfully visually. Here is Sherem reasoning with the crowd. He demands to speak with the prophet Jacob. 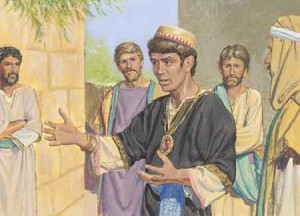 Jacob, who at this point looks remarkably like Kenny Rogers, begins to reason with Sherem. Sherem accuses him of being a “gambler” and a “coward of the country”. 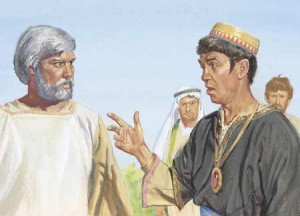 To both accusations, Jacob responds with a soulful rendition of ‘You are so Beautiful’… 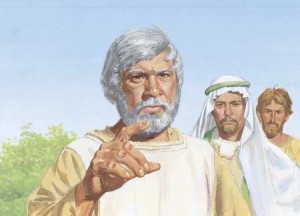 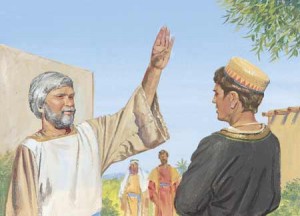 … which Sherem denies, because Antichrists are typically jerks who would totally leave a prophet hanging. Which moves us to our final Antichrist-

Korihor. Now, this dude had the odds stacked against him at birth. I mean, could you imagine a more phonetically unpleasant name? Well, I haven’t ever met a Riplakish. Shiz is also pretty bad (see Book of Ether). Korihor was a dispassionate and cold individual who was only concerned with reason. He cleaved into science and logic instead of adhering to his natural inclinations, which he deemed ‘illogical’. His disregard for beauty and emotion made him lose favor with his colleagues. 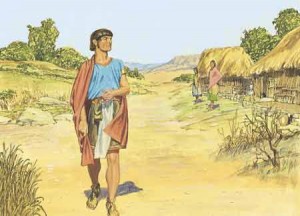 Alma, on the other hand, was a dashing young individual with a dramatic life. Having grown up a little rough around the edges, he had the know-how, but also the heart, that made a good leader. He was resourceful and had a way with words that impressed those around him. His believers loved him and would have followed him, even into the final frontier. He was rugged and handsome, and lived an action packed life. Any time he was taken captive, his shirt was removed somehow, showing his six-pack abs and perfect physique. 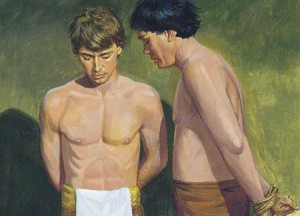 Alma and Korihor had a long confrontation that could basically be boiled down to reason vs. faith. Korihor didn’t understand why Alma believed in things that he felt had no physical evidence. Alma didn’t understand the cold, calculating logic of Korihor. Basically what I’m getting at here is that, according to the summary and the artwork, Korihor and Alma are Captain Kirk and Mr. Spock. 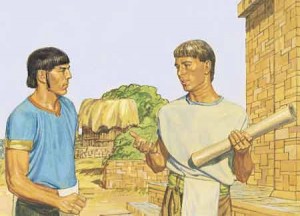 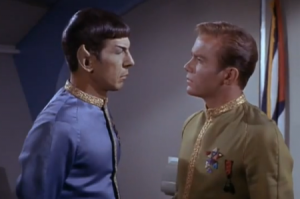 THE RESEMBLANCE IS UNCANNY!

Their war of words became fiery, and resulted in Korihor’s ultimate death, which was unfortunately captured on video.

Click here if you are unable to see the awesome video

I am probably going to show this video to my Seminary class instead of using the Gospel Art kit.

Here is another artist’s rendering of an extraterrestrial Korihor, only this time, he’s one of those black Ridley Scott aliens with elongated heads. Oh, silly Korihor, we all saw through your tubular, palm leafy cover. I mean, you could have at least worn some sunglasses or something, you beady eyed freak! 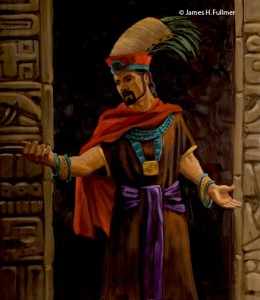 So, what do we learn from this? Well, to help you remember how to spot an Antichrist, I’ve made something you can print out and hand to your kids for Family Home Evening. Antichrist Bingo. I’ve made the scorecard here. Turn on your TV and look out for the signs. 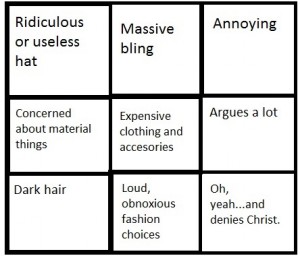 And if you were wondering, YES. Justin Beiber fits ALMOST all of these categories. There, I gave you a head start.