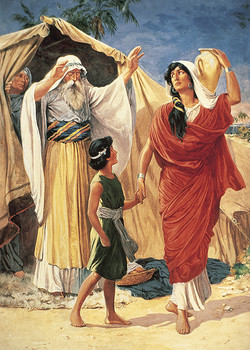 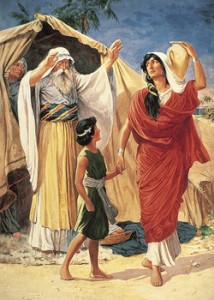 One of the things that make the character of Abraham so interesting is when his behavior is a little less than ideal. Tradition and legends that grew up around him emphasize his generosity, his concern for the vulnerable and, perhaps most of all, his hospitality.

Hospitality was a very big deal not only in the Bible, but across the ancient world. Seeing to the needs of the stranger at your tent or at your gate was the one big test to see if someone was truly righteous or even civilized. If you showed hospitality, you were marked for divine favor. Flout those same institutions, and you could expect an ignominious end, a swift burial, and a watercolor epitaph. Or fire from heaven.

That’s why it should come as no surprise that when Abraham shows lavish hospitality to the messengers, it’s immediately followed by the news that Sarah will miraculously bear a son. But the same token, the violation of the norms of hospitality on the part of the men of Sodom is intended to explain why God turned the city into a smoking hole in the ground.

But Abraham had his own difficulties with hospitality. It happens in the story found in Genesis 20 about when he and Sarah moved to Gerar. This story is a little out of place; Sarah is not old or, if she is, she’s still quite the looker; a real one-round knockout (The version of this story from the Genesis Apocryphon from the Dead Sea Scrolls goes into almost lurid detail about Sarah’s beauty, which makes sense considering that the document came from a community of celibate men).

Abraham moves to Gerar with some unfounded assumptions in mind about the people there. They are Canaanites. He clearly thinks that they cannot be trusted to behave themselves, and fears that the local King Abimelech will decide he wants Sarah, and is willing to kill her husband to get her. So, Abraham instructs Sarah to say that she is Abraham’s sister. Technically, this is true; she was his half-sister. This way, if Abimelech wants Sarah, he need only make a deal with Abraham—presumably one he can’t refuse, but he’ll still be alive.

Abimelech takes Sarah into his household; Rank Hath Its Privilege. Things start to go downhill from there; suddenly all the women in the household have stopped having kids, and for some reason, the King can’t make it with Sarah. It just doesn’t happen.

Adultery is serious business, even for a king (See: David and Bathsheba). The King is also perilously close to violating the norms of hospitality, which is about the worst thing you can do; not only is he about to commit adultery, he is about to do so with the wife of what amounts to a guest in his land, which makes it even worse. This is cause for divine annihilation.

God warns the King in a dream that he’s messing with a married woman, and if he doesn’t give her back things will really get nasty. Horrified, the King does so. The King sends gifts, Abraham prays that God will take the bad mojo away, and Abimelech’s other wives start having kids again.

This is not Abraham’s finest moment. Let’s look at all the ways he’s messed up:

The King only does what kings do, but is sufficiently righteous that he enjoys God’s protection.  God  communicates with him directly, and  tells the King in as many words that they are innocent.

There are several proposed “takeaway” points made by later interpreters, chief among which is the notion that the people God works through are not always the best of people, along with the implicit warning not to assume too much about other people’s motives and righteousness.

What’s really interesting about this little episode is the political resolution. Abimelech gives some serious gifts to Abraham. But since Abimelech is clearly the innocent and injured party, why is he coughing up all the loot?

To accept a gift is to accept certain obligations connected with it, starting with the requirement to reciprocate. If you don’t match the gift, you insult the giver, and you don’t do yourself any favors either.

Sometimes, someone will offer a gift that is impossible for the receiver to repay. In this case, the receiver becomes bound and even subject to the giver until such time, if any, that they can reciprocate.

So Abraham gets his wife back, and the Royal Household regains its fertility. Fair trade. But the king gives an additional huge gift of livestock and slaves to Abraham, plus 1,000 pieces of silver (an enormous sum). Why is the innocent party paying all this money? And why does Abraham not reciprocate?

The silver is to secure a favor; Abimelech tells Sarah a bit sarcastically that the gift is for “your brother” who reciprocates by abandoning all claims against the King pertaining to Sarah. The second gift, which Abraham does not reciprocate, renders Abraham into a subject of Abimelech. It is tied to a promise exacted later from Abraham that he will in no wise do any more of this nonsense ever again. Thereafter, Abraham is quite docile with regard to the King, and does not push the boundaries beyond what is reasonable.

Cultural background like this makes a perplexing story into a fascinating window on the thrust and parry of politics and power from a distant time.

Sheldon Greaves, Ph.D. is the host of “Discovering the Old Testament,” a weekly podcast that examines the historical, cultural, linguistic, and archaeological background of the Old Testament. He is also an adjunct instructor at Stanford University where he is currently teaching a class on the Dead Sea Scrolls. Sheldon, along with his spouse Dr. Denise Greaves, is a Scholar-in-Residence at Christ Church Episcopal in Portola Valley, CA.

Listen to “Discovering the Old Testament” via http://www.lafkospress.com.