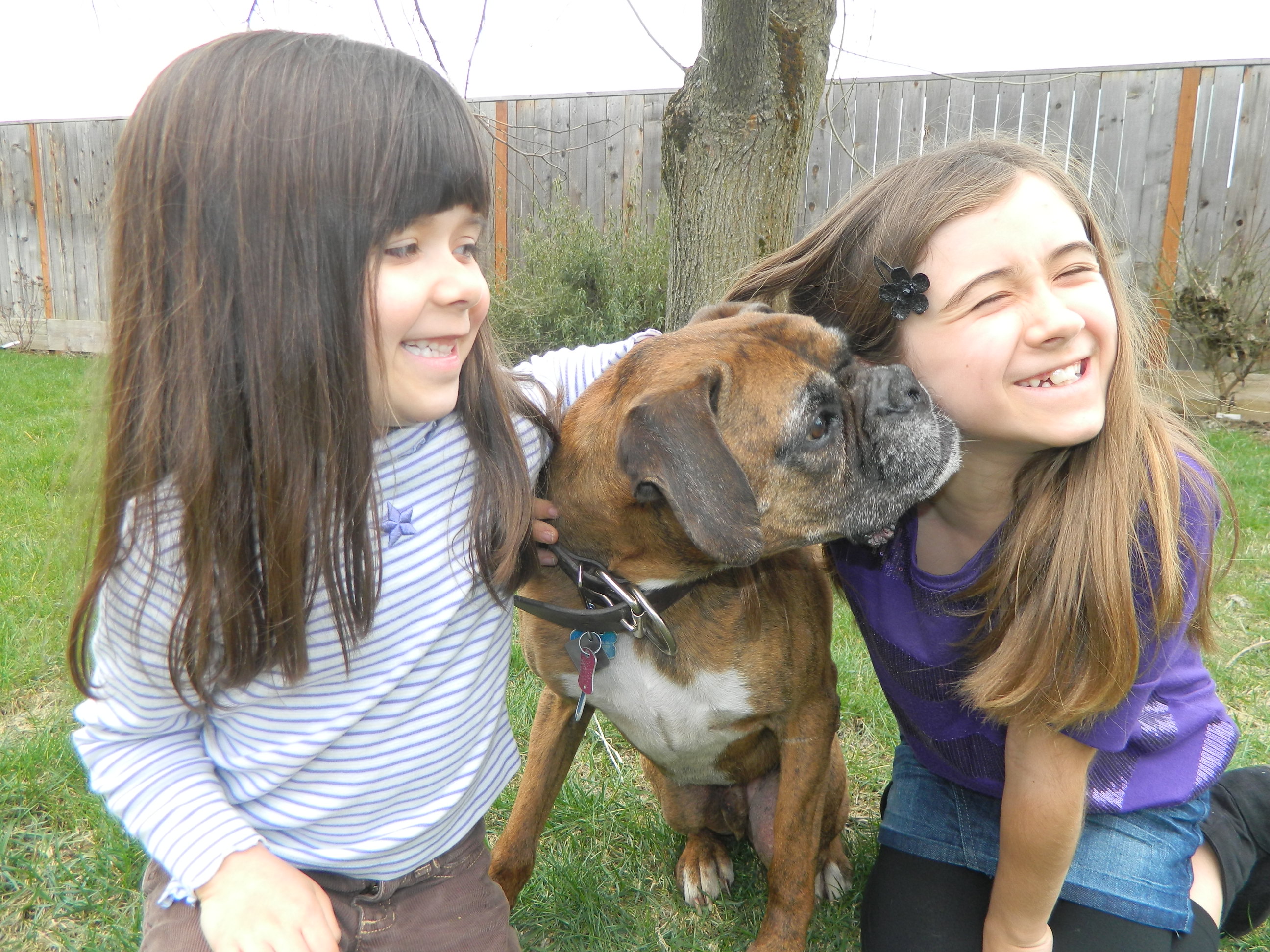 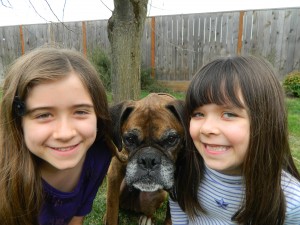 My daughters and Titus on his last day.

When my oldest daughter was about 18 months old, my wife gave me the o.k. to buy a boxer puppy.  I had wanted one for years.   Their square heads, under-bite, and wiggly butts, just charmed me.    We drove up to Grants Pass, Oregon on Father’s Day and bought a beautiful brindle boxer.   The brown in his fur was redder than most boxers.  That, along with his black mask and self confidence won my heart.

We decided to call him Titus, after the Apostle Paul’s companion in the Bible.  We thought it had a good strong sounding name.   My older daughter and later my second daughter would call him “Titey” as a name of endearment.  Sometimes his nick-name was “Titey-whitey”.  Thank heavens it never just became “Whitey”.  I  could just hear my daughters exclaiming, “We love Whitey!!”  That would have been awkward.  His little wiggly butt, with that docked tail, just wiggled its way into the Barker family’s heart.   Titus went everywhere with us and he protected us.

I remember a funny story from when my oldest was about two years old.  I was mowing the back-yard and Titus thought for sure that the lawn mower was a threat to my daughter.   All twenty pounds of him asserted itself between the lawn mower and my daughter.  He barked at that thing.  He was determined to protect her.

One of my favorite pictures. My youngest just chillin’ with her Titey.  The bike helmet is the clincher for me.

He was the perfect dog.  Clean, obedient, loving, and very, very active.   Boxers clean themselves like cats, except they are a lot louder with their licking; those flappy jowls make the licking sound kind of gross.  I would take him out on Scout camping trips and he would sleep in my tent with me.  Today, if I run into any of those Scouts, who are now all grown men, they will  still ask me how Titus is doing.   I bought him a pack so he could carry his own gear as we went on back-packing trips. He would sit and stay.  He didn’t put his paws on you.  He would heal off leash.  My girls would dress him up (think Drew Barrymore in E.T.).  People that didn’t care for animals loved Titus.   He was just a super great dog.

The one problem with boxers is that they have a short life-expentency.   They live, on average, only seven to eight years.  Titus’ black mask started turning grey.  He was getting old.  My daughters would sometimes look at Titus and say, “Titus, you are an old man!” and then hug him.   A little over a year ago Titus started getting sick.

He started having seizures and then would act very confused afterwards.  It was determined that he most likely had a brain tumor that was growing and causing his seizures.  We put him on some medication for a while, but eventually the seizures came back. And this time leaving him unable to walk.

Last March, I sat my two daughters down, then ten and six, so we could have a chat.   They knew their Titey was sick.  We discussed about how much pain he was in and how much we loved him and he loved us.  We discussed what the best thing would be for our Titey.   We cried.  I cried a lot –  because that’s what I do.   We decided to take him to the vet and have him euthanized.   We would have him cremated so we could bring him home with us. 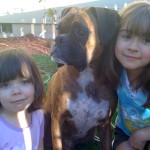 A much younger Titus and his girls.

That day I carried Titus out to the garage and laid him down.   I asked my girls if Titus should have a blessing before we took him to the vet.  They said he should.

My wife and I talk a lot about Mormon history.   We have discussed many times Mormon women’s roles in the past in healings and anointings.  The absence of these charismatic gifts in the 21st century Church has left a large lacuna in all of our lived Mormonism;  something for which we as a community are the poorer.   She has told me that if my daughters needed a blessing and I wasn’t around, she would bless them.  I celebrate my wife’s role as a Mormon woman and mother in Zion.

As Titus laid there on the garage floor with all of us around him, I turned to my wife and asked, “Cathy, do you want to bless Titus?”  She gently said no.   I was surprised.

I first put my hands on Titus’ head, then Cathy and then my two daughters did also. Invoking only the name of Jesus, I spoke in the first-person plural as we blessed him…“Titus, in the name of Jesus Christ, we lay our hands upon your head…” 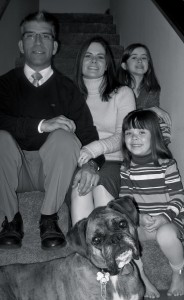 We arrived at the vet.  All five of us went into the exam room.  We all petted him as my wife and my oldest daughter said their last words to Titus.  When it was time to administer the medication to Titus, Cathy and my oldest daughter left.  My daughter just couldn’t bear to watch Titus as he drifted away.  My  youngest daughter stayed with Titus and me.  As he laid there my youngest and I lovingly petted Titus as his breathing got slower and slower.  We told him how much we loved him and what a great dog he was and how much we were going to miss him.  He eventually stopped breathing.  Our vet checked his heart.  It had stopped.

Titus’ ashes are in a wooden urn sitting on the bookshelf in our family room.  Often, usually the youngest daughter, will look at me and longingly say, “I miss Titey.”  I look down into her huge green eyes and respond, “Ya, I do too sweety.  He was a great dog.  The best dog ever. ” .

I asked my wife later why she did not want to bless Titus.  She looked at me lovingly and simply responded, “Mike, he  was your dog.” 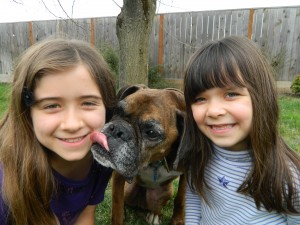 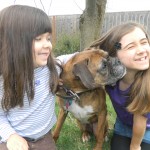 Sneaking in a nuzzle before we took Titus to the vet. 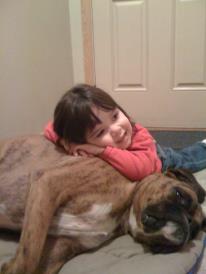 My youngest hangin’ with her Titey. 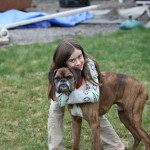 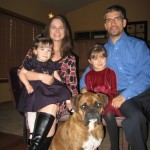