A Review of: Voices for Equality: Ordain Women and Resurgent Mormon Feminism 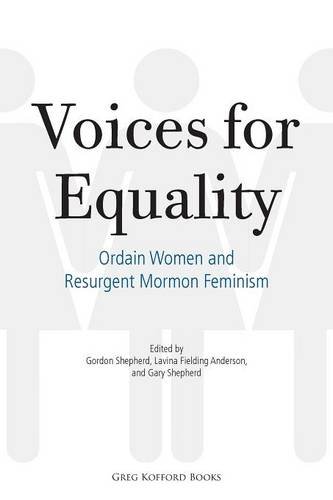 Religious and theological history has gaps when it comes to women.  Edited by Gordon Shepherd, Lavina Fielding Anderson and Gary Shepherd, Voices for Equality: Ordain Women and Resurgent Mormon Feminism helps to close that gap. Voices for Equality is a compilation of essays, studies, blog articles, and personal stories, written by both scholars and activists currently interested in gender issues within the Mormon context.

The editors have divided the book into four sections. The first, “Conceptualizing Issues of Gender and Equality in a Conservative Faith,” presents the development of ideology within the framework of the LDS Church. The second section, “Historical and Cultural Context,” concentrates on female ordination, but does not limit its discussion to the Mormon world. Rather, it encompasses the journey toward female ordination as experienced by other conservative faiths. The third section, “LDS Organizational Structure & Ecclesiastical Dynamics,” provides a brief, but valuable, explanation of the Mormon ecclesiastical structure and how its status quo limits women. The fourth section, “LDS women in the 21st Century Church,” details changes within the Mormon culture. Of particular consideration are changes to mission culture, the expanding influence of the bloggernacle and other social media venues, and the pivotal influence of the Ordain Women movement.

At first glance, the opening section may seem broad in focus as to be confusing. However, it serves as an excellent introduction to many issues in LDS feminism and the influential figures who have led the decades-long movement. It includes the background of the beginnings of Ordain Women, as told by Lorie Winder Stromberg.  Gordon and Gary Shepherd join forces in their article, “Conflict and Change in Closed and Open Systems: The Case of the LDS Church,” a clear-cut analysis of the Church’s organization structure, its impact and limitations on women, and the likelihood the status quo will change.  They point out that, because Mormons believe in a Church of continuing revelation, changes can change at any time, but these changes come only from the top, a top that is limited to men and, therefore, the male perspective. The Shepherds discuss the challenges faced by bottom-up movements, like LDS feminism, and analyze the dynamics at play. They posit that, for change to come about within the LDS church, two things must emerge: creators of an alternative narrative (the moderate LDS feminists), coupled with a radical flank (the Ordain Women advocates).

Equally intriguing is Janice Allred’s examination of LDS gender theology from a feminist perspective.  She discusses gospel teachings such as eternal complementarity in celestial marriage. She points out that much of our LDS theology has been influenced by the continued entrenchment of the priesthood-equals-motherhood mindset. This concept of priesthood/motherhood equivalency has become both embraced and entangled by members of the LDS church that it has sprouted theological off-shoots, including the Proclamation on the family, a document that reinforces and legitimizes strict gender roles without the gravitas of canonization.

An asset of Voices of Equality is that it gives a nod to gender issues beyond the usual (and expected) male/female dynamic. In J. Sumerau and Ryan Cragun’s article, “Trans-forming Mormonism,” gender identity takes center stage. They begin by asking what should be an obvious question, but too often isn’t: “[W]hat if one’s gender identity does not fit neatly into the male/female distinctions taught and reinforced by most Christian denominations and in Mormonism in particular?” They point out that, while many “argue that transgendered people are not created that way by God, as they often do with regard to sexual minorities, they must still acknowledge the creation and presence of intersex people”… who “have always existed in human societies.” Nearly all positions in the LDS church are assigned based on gender rather than by considering the talents and gifts of the individual. Because of this, many qualified intersex people are disqualified from serving the Lord by serving His people.

Voices for Equality also includes a narrative by Kristy Money and her husband Rolf Straubhaar, which describes their efforts in establishing an “egalitarian marriage.” Money, with her Ph.D. in Counseling Psychology, and Straubhaar, whose doctoral degree is in Social Science and Comparative Education, are sharply aware of traditional role expectations within the Mormon culture, but forsake them in favor of a lifestyle of intent on power-sharing, one that enables them to work towards their individual and common goals with equanimity.

Mormon feminists are not alone in their desires for equality within their faith structures, or for female ordination. While Voices for Equality addresses feminist movements in many religious traditions, perhaps the most compelling essays in Voices for Equality is found in the personal narrative of Robin Kincaid Linkhart, a member of the Community of Christ. She opens for view the unfortunate exodus that occurred in 1985 when the Community of Christ began ordaining women.  However, her story also illustrates how the decision to ordain women has positively affected both the general membership of the Community of Christ and individuals within that faith community. The culture surrounding the Community of Christ was slow to change in order to accommodate a hierarchy that embraced female ordination, but change it did. Linkhart explains the frustrating reality that, at first, women found themselves continuing to do all they had in the past, while taking up the new responsibilities of priesthood.  However, over time, the gender equity at church led to more gender equity at home and work.  Now women serve alongside men in all positions. Most striking, Linkhart explains the beautiful transition many ordained women made as they moved from imitating the leadership style of the men they knew toward the development of a feminine style all their own.

Voices for Equality also addresses the uncomfortable dynamic of excommunication in the LDS church. Many practicing Mormons tend to avoid this subject and are often discouraged from discussing an any “transgressions” an individual may have done that would warrant a church court or excommunication. It’s likely, therefore, that many faithful Mormons don’t fully understand the excommunication process. The cultural taboo of discussing events leading to an excommunication makes it unlikely that the average LDS member would be aware of practicing members who have experienced excommunication, but currently are returned to the status of “full fellowship.” Robert A. Rees provides the article “Disciplinary Councils: Excommunication in the Modern Church” that has some frank discussion about the history and effectiveness of LDS Church discipline practices. It examines the impact of such extreme measures on the LDS Church community.  Nadine McCombs Hansen’s article, “Church Discipline and the Excommunication of Kate Kelly” is not only a narrative, but Hansen also provides an evaluation of whether or not the excommunication of the former Ordain Women’s spokesperson functioned to genuinely achieve the stated purposes of LDS Church discipline.

The concluding section delves into the current LDS feminist movement and discusses changes happening now in the LDS Church.  A large part of these changes is the impact of social media. While Ordain Women may have caught the attention of many people, it especially helped to expose the depth of the quiet dissatisfaction that many women were experiencing.  In many cases, this quiet disappointment found a home with social media groups that now act as online communities for many Mormon feminists.  These online communities have played a large part in educating and creating an awareness of feminist issues.  Social Media is also a large part of the blogs and articles that serve to broadcast the messages of Mormon Feminists.  Ordain Women profiles are part of this broader message, with a personal perspective.

Many will remember the Mormon Gender Issues Survey that circulated via social media. The intent of the survey was to ascertain how faithful, active members feel about specific gender issues.  Voices of Equality dedicates a large portion of its final section to both the data collected and its analysis. This section, alone, makes the volume a compelling read. Developed by sixteen academics, the survey garnered over 90 thousand responses. Respondents who self-identified as not active LDS church members were excluded. The text explains in detail why questions were worded as they were and draws uncanny parallels between the survey’s results and those of a less previous, less intrusive Pew survey. Two results from the survey stand out. First, 76% of participants indicate they would support female ordination if such a revelation came through the First Presidency.  Second, only 63% of those same participants felt that “the typical member would be” supportive of female ordination.  In other words, a full 3/4ths of survey participants would support female ordination personally. However, if the survey accurately represents the perception of most faithful Mormons, (which it intended to) then it shows that many would support the idea of female ordination, while believing that many of their friends and fellow members would not.  In other words, the perception is that faithful members are more resistant to the idea of female ordination than they actually are.

Voices for Equality: Ordain Women and Resurgent Mormon Feminism is undoubtedly an important benchmark for contemporary LDS feminism. Its weakness, if it has one, is that it pays little attention to what the Shepherds call the “alternate narrative creators,” or the more moderate feminist voices. Instead, the text pivots on ideas of “the radical flank,” or those focused on female ordination as the only path to equality.  While moderate feminist voices appear, they tended to address issues other than female ordination.  Although the book is engaging it verges on the overwhelming.  Trying to accurately recapture the history, theology, ideology and practices of the micro-culture that is LDS Feminism is a huge undertaking.  Despite the fact that it provides a very comprehensive background and examination of women’s issues, at times it threatens to drown the reader with the exhaustive quantity of information.

With that said, Voices for Equality remains a ground-breaking work that should gain a wide readership. It can be a valuable tool for Church members of all stripes who want a better understanding of feminist ideas in the modern church.

All posts by Rebekah Lindbloom