A Mother There. And Here. 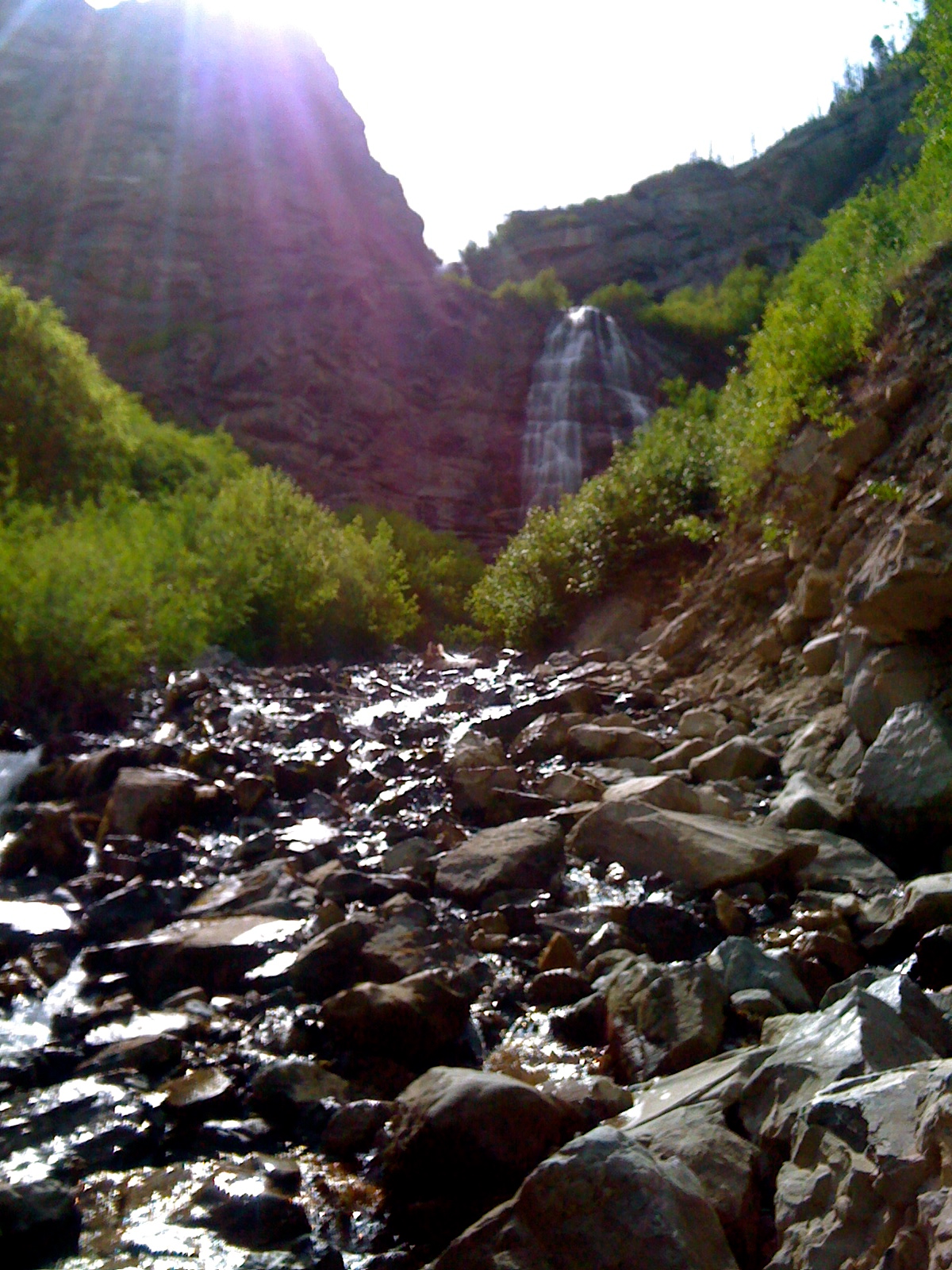 In the heav’ns are parents single? No, the thought makes reason stare!
Truth is reason; truth eternal tells me I’ve a mother there. ~ Eliza R. Snow
.

My first concrete experience of the divine feminine happened about twenty years ago when I was mourning the loss of my mom. This mourning was not about her physical death, but about the tragic absence of her “self” from her own existence and subsequently from my existence as her child. She had been unable to mother me in ways that are essential for healthy human development. This is only part of the story. The other part involves a man (my father) who was partially responsible for my mother’s early demise. You can read about those things sometime if you choose—at this site.

As a grown woman with young children of my own, I found myself at a certain time of life, working to fill the void left by my mother’s absence and my father’s destructive actions toward me during my childhood. There were times when I simply couldn’t reach in prayer for a “father” because of negative associations with my mortal father. Naturally, the next best place to find divine help for me as a devout Christian was in a loving brother-savior, Jesus Christ. Like so many others, I found comfort, healing, hope and redemption through the Savior’s grace. But I also found an unexpected link to my Heavenly Mother. Because, you know, an older brother can only do so much. Sometimes you just need your heavenly mom.

So, occasionally I prayed to Heavenly Mother. Now, I have to admit, initially I felt somewhat heretical or blasphemous for praying to a female God. But at that point I was in such dire need of a parent that I didn’t care about real or imagined repercussions. Besides, in my heart I knew she was there and would respond to me, as any mother would. As I prayed I felt distinct awareness of both heavenly parents, or at least, distinctly masculine and feminine energies listening and watching over me. I continued to address Heavenly Mother for several months and received answers to my prayers, comfort via the Holy Spirit and via the Savior’s atoning love. This new found freedom to bond with a divine maternal presence played a prominent role in keeping me connected to my heavenly home during a heart-rending time of life. Not only was I not punished for seeking Her, I was richly rewarded. She truly became my Heavenly Mother—as familiar and real to me as my Heavenly Father had always been.

This period laid a firm foundation in my heart and mind. As I went on with life it became abundantly clear that praying to Father or Mother made little difference to them. They are one as parents. They are one in spirit, might, power, glory and love. I sincerely believe that our parents in heaven do not care to whom our prayers are directed. They only care that we are connected to them. Very often these days my prayers are directed simply to God and for me this includes both parents.

[I must add here that throughout my life Jesus Christ has been the one to whom I have prayed in my greatest moments of distress. This has happened without aforethought in times when I have been so distraught I felt I couldn’t bear the burdens life required of me. Usually amid sobs and pleas for comfort, I instinctively and intuitively cry out for Jesus. This is as it should be. He is, after all, the one who saves us in this world and from its effects.]

Once this foundation was laid I noticed how, every now and then, specific promptings, impressions and moments of enlightenment seemed to have a distinctively feminine feel. One particular time was while I sat at the base of Bridal Veil Falls in Provo Canyon, Utah. This is a well-known scenic spot in my community and is often crowded with visitors—cyclist, runners, and people taking casual strolls up and down the paved Provo River Parkway Trail. Those of us who frequent the trail often stop to take in the breathtaking beauty of the falls. “Back in the day” there was far less traffic and a nice patch of lawn bordered the trail. Unfortunately, the grass is now gone due to snow slides and alterations in the terrain over the last two decades. But it used to be there. And it was a place of frequent meditation for me. 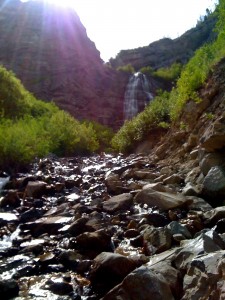 On one such day I again felt a longing for Mother, for a maternal presence in my life. The trail was unusually devoid of passers-by. I sat down on the grass, stretched my legs out in front of me, leaned back on my hands and gazed up at the falls. The air was clear and a little cool. Listening to the sound of water and wind, feeling occasional mist on my face, I heard, or rather, felt something in my heart and mind that was almost like a lullaby. Heavenly Mother seemed to be everywhere in the earth around me. It felt like music. Her music. A poem formed in my mind as I sat there. It is simple. But in these few words, again, Heavenly Mother came to me in Her way.

I think I hear

This is My Beloved Son

My son, Luke, married his Rachel two years ago. I could go on and on about what an awesome person Luke is. I could make jokes about how I take credit for most of that since, well, you know, he was made out of cells from my body. Of course once he was old enough to tell me those cells had all been replaced hundreds or thousands of times (depending on the specific tissue) and that they are now all his very own cells, my claim to vicarious fame went out the window. 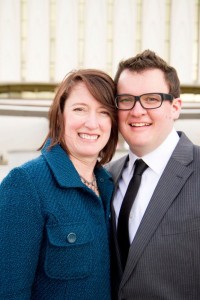 Shortly after the wedding I did what every mother does: I looked through photographs and came upon this one. It’s easy to see his father in him because, well, they are both male. The characteristics Luke shares with me, a woman, may be less obvious, but they are unmistakable. His DNA bears witness of that truth; the shape of his eyes and eyelids, his teeth, the thin upper lip and fuller lower lip—these are all characteristics that came from his mother.

But the most astounding thing I discovered when I looked at this photograph was something much more subtle. I had never seen it before. You may not even see it here in this small picture, but when I viewed this photograph on my computer for the first time my eyes went directly to Luke’s nose. It has a slightly asymmetrical tip, with the left side being a little higher than the right. Then I looked at my own nose in the photo. I felt the tip of my nose with my fingers and got up from where I was sitting to look in a mirror. I was surprised to discover that the same subtle asymmetry exists in my nose. In fact, it’s identical. That nose tip. I had never noticed this about myself and this surprised me. The next time I saw him I showed Luke the photo and he said, “Yeah, I’ve always known my nose had that slight uplift on the left. That came from you?”

The shape of one’s nose might mean little to someone else, but that day, once again, I had an unexpected and profound witness about how I know Heavenly Mother is there: She sent her son, Her beloved son.

The Savior refers to his Father over and over again throughout his mortal ministry. It’s easy for us to see His father in Him. He never once mentions his Mother God. We can make suppositions about why this is. But for the purpose of this essay, frankly, the reasons don’t matter. What matters to me is this: As surely as my son bears resemblance to me in his mannerisms, his smile, and in that subtle up-shift on the left side of the tip of his nose, so does our brother and Savior, Jesus Christ, resemble his mother.

He has asked us to look to him to know our Father and his Father, our God and his God. (John 20:17) Truthfully, it is He whom I credit with my understanding of Mother God as well.  My relationship with Him and my belief in His promise that we may know the truth of all things (Moroni 10:5) gave me faith and courage to move outside the norms of my own religious culture when I first prayed for help from Heavenly Mother. His promise of redemption gave me faith that no matter what I needed to do, I could indeed work out my own salvation with fear and trembling before Him. (Moroni 9:27) Each person must find the truth in his or her own way. Perhaps just as no man cometh to the father except by Him (JST John 6:44)—no woman cometh to the mother except by Him. If we are to know the true nature of God, perhaps we can best know Her through Her son who came to dwell among us. That’s how it was for me anyway. I found Her because I first knew Him.