A Midwife’s Tale: A Mother-Daughter Review of Faith and Feminism

“A Midwife’s Tale” does not read like a novel.  It is a factual account of the life of Martha Ballard, based on her diary. I was not immediately drawn into this book, but it won the Pulitzer Prize, so it must be a worthwhile read—right?  Therefore, I persevered, and am happy to say that I was rewarded in doing so.

Martha lived with her family in Hallowell, Maine, along the Kennebec River.  I was surprised to learn that by the time she started writing the diary, she was already 50 years old.  The year was 1785, and she continued writing for the next 27 years.  During that time she attended 816 births, cared for the sick, and swaddled the dead as well as the newborn.

Travel was difficult, and getting where she needed to be was a challenge in itself.  She wrote of walking through waist deep snow, high winds, and being barely thawed from one journey before taking another. She traveled the river by water, by ice, and by faith. One entry told of crossing the river and being so tired that she had to be pulled up the river bank on the other side. She once described breaking through the ice to her waist and continuing on to the delivery, dripping.  Why was she willing to do this?  Martha believed that God protected her in her difficult travels, and sustained her through difficult deliveries.  This gave her the strength to continue her work.  It was her “inner calling.”

Martha, though not a doctor, was one of the busiest medical providers in Hallowell.  She was a “social healer.”  Rather than professional training, social healers had years of “hands on ” experience.  Her main concern was making the patient feel better, and she went further, stayed longer and did more to accomplish that than most of the doctors of her time.  In fact, she was a threat to the local doctors. Even the elite families of Hallowell would employ her to deliver their babies as she had a much higher success rate. She described an incident when Dr. Page was called to a difficult delivery, and the baby was stillborn with dislocated limbs.  Martha attributed this with his lack of familiarity in the “difficult manipulation required in breech births.”  She gave God the credit for her success, but she knew that He had worked his will through her hands.

Hallowell had its share of religious disagreements, scandals, & unwed mothers. Often when Martha delivered a baby, the unwed mother would tell her the name of the father. I found it humorous that the “Midwifes Guide” stated—“a good midwife ought to be faithful and silent.” Therefore, when she delivered a baby to an unwed mother, her diary named the mother only.  Everything belonged to the men, even the babies.

It was obvious to me that she was a woman who liked neatness, order and harmony.  Arriving home after being up all night delivering a baby, she would often

find her house a mess, and instead of getting much needed rest, would stay up doing house work.  I could totally identify with this.  How can you rest when things are a mess!  More exhausting than her work was the discord in her family.  While her husband was in debtor’s prison, son Jonathan moved his family into her house, and she was given a room. She became a border in her own home.  She described the effect of family tumult as bringing on “a fatigue so draining, that I could hardly lift my head from the pillow.”

I felt that writing her diary was very important for her mental health, especially in her later years.  In its pages she could list her accomplishments.  This part of her life she could control.  If, like me, you find this book a challenge, don’t give up.  Whimsical easy reads are too soon forgotten.  The rich content of this book will be long remembered.

The introduction to A Midwife’s Tale cites reviews of Martha Ballard’s diary by earlier historians, one of whom called it “trivial and unimportant” and another who stated “like many diaries of farm women, it is filled with trivia about domestic chores and pastimes.” If this diary was such a mundane and unimportant work, how did Laurel Thatcher Ulrich turn it into a Pulitzer-Prize winning book? I would postulate that this has to do with the perspective of the historian/reader and how he or she perceives the importance of the contributions of women to the greater society. It’s true that Martha spent a great deal of time tending her garden, baking bread, spinning cloth, and tending to seemingly endless household chores. However, her diary does not show her only in this light; she was also a strong woman who held a valued and respected profession in her community. Writing a Pulitzer-Prize winning book based on this source material…what else would one expect from the woman who coined the phrase “well-behaved women seldom make history”?

It was during Martha’s middle-age years when she had the opportunity to grow into her career as a midwife. At this point, her children were mostly grown and she had daughters who were old enough to tend to the majority of the household duties but had not yet married and established their own households. As a result, she was free to take calls for a variety of healthcare needs; she assisted in many births, but also with numerous illnesses and injuries using local plants, purchased medicines, miscellaneous household ingredients (beeswax, cornmeal, and vinegar, to name a few), and even brandy and rum.  Unlike the doctors of the day, midwives did not bleed their patients and they often stayed with them longer than the usual doctor visit, offering compassion and support to both the ailing person and his or her family. Martha traveled through ice and snow to tend to her patients, spending many nights away from home only to return after a sleepless night and begin tending to her own family. Her devotion to her community, her calling as a midwife, and her faith in her God kept her going.

During this period in history, the midwife was the most frequently consulted medical professional as doctors often practiced part-time while pursuing other careers. This kept the practicing midwives very busy. However, the prominence of and respect for midwives in the medical profession was starting to change. As stated in the book, “In 1820, a professor at the Harvard Medical School published an anonymous  treatise in which he argued that women should no longer be employed as midwives because their character would be destroyed by acquaintance with the dissections essential to thorough instruction in medicine.” Ulrich calls this a “classic double bind” stating, “Women could not qualify themselves to practice midwifery without mastering general medicine, but learning general medicine would disqualify them as women and therefore as midwives.”  How distressing this must have been to the midwives of the day, having to choose between being seen as less of a woman or less of a healer.

As Martha’s daughters grew older, married, and established their own families her midwife practice changed. Although Martha and her husband employed several young maids over the course of the years, these helpers did not tend to be as reliable as Martha’s own daughters had been. As a result, Martha found 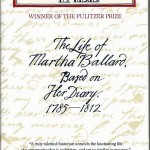 herself being drawn back into many of the household duties while her own energy level and health decreased with age. The number of house calls Martha was able to take decreased accordingly. During this time, Martha’s husband was sent to debtors’ prison, leaving her as the head of the household. As one might imagine, this situation was not tolerated for long. Martha’s son soon moved his family into the house, taking control of the household. One might think that Martha would have found it a welcome occurrence to have more helping hands around; however, Martha chafed at the situation. She had gone from being a respected member of the community, taking care of her family and her patients, to basically being a boarder in her own home. I can imagine that this lack of control over her own life did not sit well with such a strong and capable woman.

Some nonfiction books are written to read like fiction, in a very approachable manner that quickly engages the reader. It’s true that A Midwife’s Tale is not one of those books. Excerpts from a 200-year-old diary alongside historical commentary do not necessarily make for a quick and easy read. However, this book is rich with ideas and insights into a time long past, but that still has relevance today.  Along with the tale of a midwife, readers will learn more about the family life, social structures, economics, politics, and even the religious turmoil of the time. I would highly recommend the book for those who are interested in learning more about the life of a strong woman and the challenging time in which she lived.