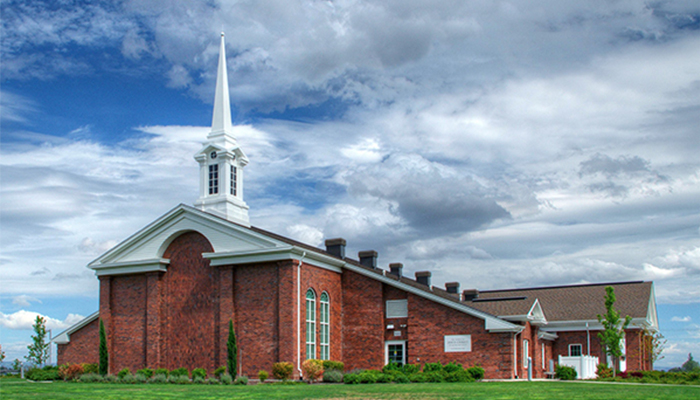 In any other circumstance, with a parent’s approval, a minor age 8 or older can be baptized into the church. Unless it is a child of a same-sex couple. In this case, even if the parents approve the child cannot be baptized. It would seem that some are dismissing the approval of same-sex parents because it is questionable—since they are rejecting the gospel. This is bigotry. There is a lot more to this gospel than whatever definition of marriage you ascribe to it (polygamy anyone?) and to say that someone who is gay is rejecting the gospel just because they are married is a farce. They can—and many do—still have a testimony of the Savior and many other principles of the gospel. You are not allowed to define their relationship to the gospel entirely by their sexual orientation.

People also argue against fact #1 by turning it on its head and claiming it protects children. This is some of the finest mental gymnastics I’ve ever seen. Except it would hold more water if these children were actually in danger of something. Or even if we applied it to every situation where the children were taught one thing at home and another at church. Or where there were divorced parents with different beliefs and custody issues. But we’re actually just applying this policy to children of same-sex couples. And that is because it is not about protection at all. And, God help me, “this is for your own good” is just exactly the thing abusers say. This punishment is, in fact, spiritual abuse.

Also please tell me in what universe it is not a punishment to deny someone saving ordinances at any point in their life?  In Primary, we go on and on about preparing 8-year-olds for baptism and we tell them how much they need it and how much it will mean to them NOW.  Are we changing our stance on that?  Are we now claiming that there is no benefit to having made the baptismal covenant and having the Gift of the Holy Ghost through the teenage years?  Suddenly when it comes to children of same sex couples it is just no big deal to wait.

I guess people argue against this because there are other excommunicable offenses on the books? Of course, for all the other excommunicable offenses, aside from polygamy, the children can be baptized with parental consent whenever they please. The church has a long history with polygamy that involves rooting it out of the body of the church. Unless they think children of same-sex couples are going to be coming to church and trying to secretly convince others to enter into same-sex marriages, there really is no relation between the two policies.

It is intellectually dishonest to say that all “sin” is treated the same.  Even Christofferson said that homosexuality is considered a more grievous sin.  Why on earth, I have no idea, but there it is. 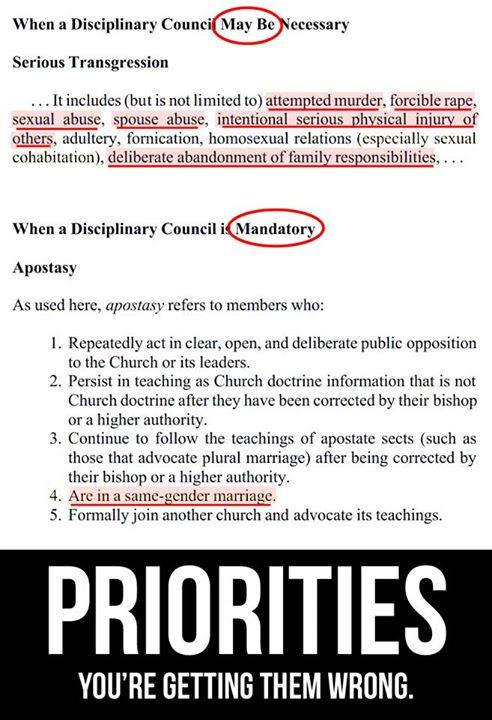 Fact #3: These policies punish children for the perceived sin of their parents.

We aren’t talking about Adam’s transgressions here.  This actually doesn’t have anything to do with the 2nd Article of Faith, although some are claiming it does. It has to do with the fact that a child’s participation in saving ordinances is predicated on choices their parents have made. No matter who the child is, what they believe, or what they have done… There is no justification for this in our gospel. None.

Fact #4: These policies require children to reject their parents.

People saying that all the children have to do is say that same sex marriage is wrong are conveniently leaving out the actual language of the policy. These are the requirements:

Tell me what disavowing the practice of same-gender cohabitation and marriage looks like when your parents are in a same-sex relationship and you have to commit to disapproving of it FOR THE REST OF YOUR LIFE.  Let me emphasize the second requirement:  Does not live with a parent who HAS LIVED or currently lives in a same-gender COHABITATION RELATIONSHIP OR marriage.

Even if the parent just lived with a partner from some length of time 10 years ago, we are asking the child to leave home, and never go back.  Because #familyfirst.

Please tell me of another group of people denied any saving ordinances for any period of time? None? Just apostates and these two subsets of children (including children of polygamists)? Oh, I see.

Again, it is logically inconsistent to claim this policy has anything to do with parental approval or protection of the families involved. If that were true, it would be applied to many more cases than just children of same-sex couples.

Fact #6: The Church is pushing LGBTQ* members out the door.

Say what you will about loving the sinner and hating the sin, but it is lip service.  Actually, don’t say what you will. You can’t treat people this way and then pat yourself on the back for loving them.  You can’t bar them from the doors of the chapel, and then point the finger at them when they do not come in.  That the church is full of bigotry is not in doubt, and we are losing precious souls and the beauty they would bring to our congregations because of it.

Fact #7: This hurts me personally.

And not just me.  This policy is causing so much pain. Especially those that directly affects, but also those of us whose compassion has led us with them into those dark places. It is thick and it is tangible and so many of us are wading our way through it with confused spirits and broken hearts.  What kind of cold, compassionless person tells you that you are not allowed to have feelings about this? Can there be a less empathetic, less Christ-like response? These new policies actually made people want to die. If you can’t actually feel more empathy, then fake it.  Whatever you do, don’t accuse us of argumentum ad passiones. Because that is a jackass move.

Fact #8: The Church needs to let this go.

There is an argument that this policy was put in place for legal protection.  Since same-sex marriage actually poses no legal threat to the Church, that doesn’t really make sense, does it? Oh, unless you mean that the church put the policy in place to continue to fight against same-sex marriage on legal grounds. That makes more sense. It really feels more like the policy was put in place to draw a line in the sand about the issue.  And they really do need to let it go. The church is fighting a losing battle trying to control the issue and the narrative, and now they are using the saving ordinances of children to do it. It is divisive and it is doing damage, and the Church should retract it.  We all know where the Church stands on the one man + one woman (+ another woman + another woman + etc.) issue.  We don’t need to inflict so much damage over it.

Okay, if you’ve figured out the post I’m reacting to here, you’ll note that I am agreeing with that author on this issue.  But, you see, I’ve seen more people talk about having faith in the leaders of the church and the gospel in DEFENSE of the policy changes than I have those who have argued against it, or who are upset about it.  EVERYONE needs to understand that this is just policy.  There is no absolute truth represented in it.  I don’t even think God is represented in it. I think it is morally repugnant. And fortunately, since it is not doctrine I don’t have to have faith in it.  I don’t have to think the Leaders are automatically right about it just because they are the Leaders.  They have been wrong about policy in the past, and we all know it. It can change, and we can hope and pray that it does regardless of our faith in the gospel.

Bonus: This could lead to a great exodus.

At my last count, I have 11 friends resigning over this issue.  Three of them have already written their letters. I think the mass exodus is a given. I keep hearing that these people just don’t have enough faith in their leaders. I suppose that is true.  But the theme among my friends that are resigning is this: They are putting their faith in the Savior, and not the arm of the flesh. The are following the Spirit. And it is leading them right out the door. Some might say “even the elect will be deceived” in the last days.  But who exactly are the elect?  We are talking about the marginalized here.  The elect all seem pretty comfortable with this new policy if you ask me.