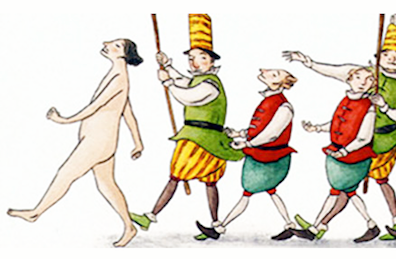 The Emperor shivered, for he suspected they were right. But he thought, “This procession has got to go on.” So he walked more proudly than ever, as his noblemen held high the train that wasn’t there at all.

If there was one positive thing to come out of the recent policy kerfluffle, it was the opportunity for the LDS Church to show to the world how it has run out of spiritual and moral capital when it comes to its dealings with the LGBTQ community.

Simply put, the Church is bankrupt on this issue.

We knew this coming out of the Prop 8 fiasco, but it has been six long years since then, with a few token gestures by the Church thrown in, and the policy incident was a needed reminder that the leaders of the Church have much work to do.

“Know thy enemy,” as the saying goes. And the enemy here is bigotry.

Like the naked emperor, the Church stands in the waning light of the now-fading Mormon moment, exposed for all the world to see it for what it is – an organization led by aging, straight white men born in a different era and sheltered to the point where they still believe gay families are a threat to the world.

What’s most troubling to me personally is not just the open hostility, but the utter lack of moral and spiritual foundation on which to rest their argument as it relates to same-sex marriage.

I’ve compiled a short list of the ways the Church’s current stance on gay marriage and its views toward the LGBTQ community fall short of even basic scrutiny:

1) The Celibacy Policy – The Church espouses the familiar Biblical refrain that “It is not good for man to be alone.” It still actively encourages young single adults to marry as soon as possible and start families. It believes families are essential to God’s plan. It believes and teaches that our eternal destiny lies in forming everlasting bonds in holy matrimony, bonds that extend beyond this life.

The Church has also (finally) acknowledged, after years of openly and blatantly beating the “curable” drum, that being gay is not, in fact, something one can change.1 So here we have significant cognitive dissonance – it’s not good for man to be alone, except for gays. It’s better for you to be alone, even though you didn’t choose to be gay, nor can you do anything about it. The Church doesn’t even pretend to have an answer for this one, instead choosing to completely ignore the dissonance it causes through its celibacy approach.

This is all beside the fact that we have ample evidence to show that encouraging our gay brothers and sisters to live lives of celibacy or engage in mixed-orientation marriages is harmful to their mental health. Do we truly desire their happiness? Do we truly want them to live lives of fulfillment? Then let’s borrow from the already existing playbook and encourage them to form healthy, committed, legal relationships as is now afforded to them. That’s what leads to happiness.

The Church simply does not know what to do with gay people. It has no answers.

2) Implying Christ condemned same-sex marriage – One of the most infuriating parts of the recent policy episode was the Church Newsroom’s condescending diatribe about Christ’s approach to sin:

Of course the Savior’s love was never withheld from anyone and His words on the cross exemplify that. But, He also expressed love by teaching clear doctrine and standing firmly against sin with sometimes-tough lessons for which people rejected Him. That is where Church leaders stand today – holding firm to the doctrinal position of right and wrong, while extending love to all people.

President Newsroom is employing some skillful rhetoric here, but it’s not based on anything foundational. The fact remains that there is no “clear doctrine” here for the Church to call upon as far as Jesus and his words are concerned. Zero. The Church insists on a hard-line when it comes to same-sex marriage, but clearly fudges the literal line from the New Testament that Jesus draws in terms of divorce. Scriptural proof-texting at its worst.

The Church relied for years on scant doctrinal evidence for the priesthood ban. The evidence it had, it has now disavowed. It is now using similar rhetorical devices to support its stance on same-sex marriage. Reminds me of a quote:

‘Those who cannot remember the past are condemned to repeat it.’

It’s time for the Church – and Church members – to acknowledge this. We need, desperately, further light and knowledge in this area, and there is no indication the Brethren are seeking it. Instead, they seem to be content to retread the same old arguments.

3) The Hierarchy of Sin – The Church’s policies clearly and unquestionably place legal same-sex marriages above rape, incest and murder in terms of severity. The former requires an automatic “court of love.” The latter three? Church discipline is merely recommended. I served in a bishopric and co-habitating heterosexual couples didn’t even earn a bat of the eye from the bishop.

Not really much else to say here except to highlight the repugnancy of this approach.

4) Comparisons With Polygamy – With the adoption of the new policies, the Church laughably lumped same-sex marriage with polygamy. How an institution that still canonizes the practice of polygamy and that has among its current apostles two practicing spiritual polygamists can do this with a straight face is completely beyond me.

If the Church wants to use the polygamy card, it needs to be more willing to deal with the skeletons that come with that closet.

5) Utter Lack of Revelation – In a church that proclaims to set itself apart from the world thanks to its belief in continuing revelation, perhaps the most egregious thing to consider is how this battle against the LGBTQ community has been openly waged over the years without an ounce of revealed, canonized doctrine behind it. The best the institution has been able to pull together is a document, drafted by lawyers and conveniently not shared with the female auxiliary heads before announcing it to the body of the Church.

That’s right, we’re talking about the Family Proclamation. Pres. Packer’s now infamous slip of the tongue notwithstanding, the Proclamation has never been established as revelation, and until it is presented to the general membership of the Church, can only be insinuated but not officially accepted as scripture. That’s the closest the Church has come to declaring any of its positions on homosexuality or same-sex marriage as doctrine.

The Church has built itself a pretend set of spiritual clothes, with which it has cloaked itself and its membership. Members shuffle to the pulpit, speak out in Sunday School and post on social media and declare how beautiful the Emperor’s clothes are.

Meanwhile, the world stares in disbelief, and those of us who struggle to make sense of it all cry with Joseph:

O God, where art thou? And where is the pavilion that covereth thy hiding place?

How long shall thy hand be stayed, and thine eye, yea thy pure eye, behold from the eternal heavens the wrongs of thy people and of thy servants, and thine ear be penetrated with their cries?

Yea, O Lord, how long shall they suffer these wrongs and unlawful oppressions, before thine heart shall be softened toward them, and thy bowels be moved with compassion toward them?

How long will the Lord be patient with the leaders of the Church?