17: Darius Gray and The Priesthood/Temple Ban 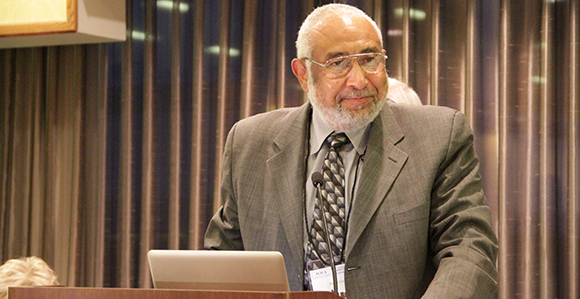 I was lucky enough to hear Darius speak this past winter at BYU. In his presentation he went over the new Gospel Topics “Race and the Priesthood”.  It was very interesting to hear his point of view and also the process of how this article was produced from a person that was involved and featured in this article. Have a listen. I hope you enjoy it.

From his wikipedia page:
Darius Gray is an African-American Latter-day Saint speaker and writer.

Gray was born in Colorado Springs, Colorado. He joined The Church of Jesus Christ of Latter-day Saints (LDS Church) in the mid-1960s and then attended Brigham Young University for a year. After that he transferred to the University of Utah.

Gray worked for a time as a journalist.

Gray was a counselor in the presidency of the LDS Church’s Genesis Group when it was formed in 1971. He was president of the group from 1997 to 2003. Gray was also the co-director (with Marie Taylor) of the Freedmens Bank Records project for the church’s Family History Department. He is a speaker on African-American genealogy, blacks in the Bible and blacks in the LDS Church. He had also written a trilogy of historical novels (“Standing on the Promises”) with Margaret Blair Young, and co-produced/directed a documentary with Young as well: “Nobody Knows: The Untold Story of Black Mormons.” Utah’s NAACP honored him with its Martin Luther King Jr. award in 2008, and the Iota Iota chapter of Omega Psi Phi fraternity honored him as “Citizen of the Year” in 2011.

Gray has traveled throughout the United States to make presentations. In 2007, he appeared in the PBS documentary The Mormons. In February 2008, he made an invitation-only presentation at the Charles H. Wright Museum of African American History in Detroit that was partly sponsored by New Detroit. He is also featured in the BYU Television series Questions and Ancestors.

Gray has also served as a developer of the website blacklds.org and on the advisory board of Reach the Children, a humanitarian organization designed to help people in Africa.

Gray was among those involved in Developing the “Race and the Priesthood” essay published on the website of The Church of Jesus Christ of Latter-day Saints in December 2013. In 2014 Gray was given a special citation by the Mormon History Association for contributions to Mormon history.