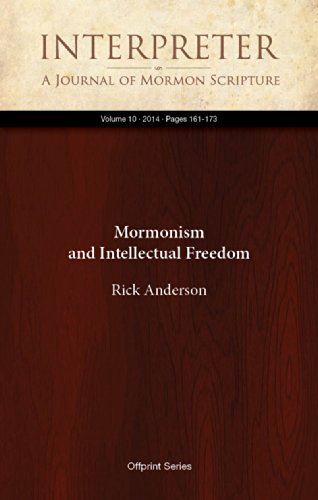 Rick Anderson is Associate Dean for Scholarly Resources & Collections in the J. Willard Marriott Library at the University of Utah. Rick Anderson is the author of the article in the Interpreter entitled Mormonism and Intellectual Freedom.

Discussing some of the critiques that some have regarding the doctrines, practices, and culture of Mormonism as restricting intellectual freedom.

The quest for dovetailing intellectual pursuits in a spiritual or religious context. And the role of scholarship in religious endeavors.

Nick Galieti is the host of the Articles of Faith Podcast, The Good Word Podcast, Good Thinking Podcast and records with the Mormon History Guy Show with Russell Stevenson. Nick is the author of Tree of Sacrament and director and producer of the documentaries Picturing Joseph and Murder of the Mormon Prophet.

All posts by Nick Galieti