“White and Delightsome”: Racism in the Book of Mormon 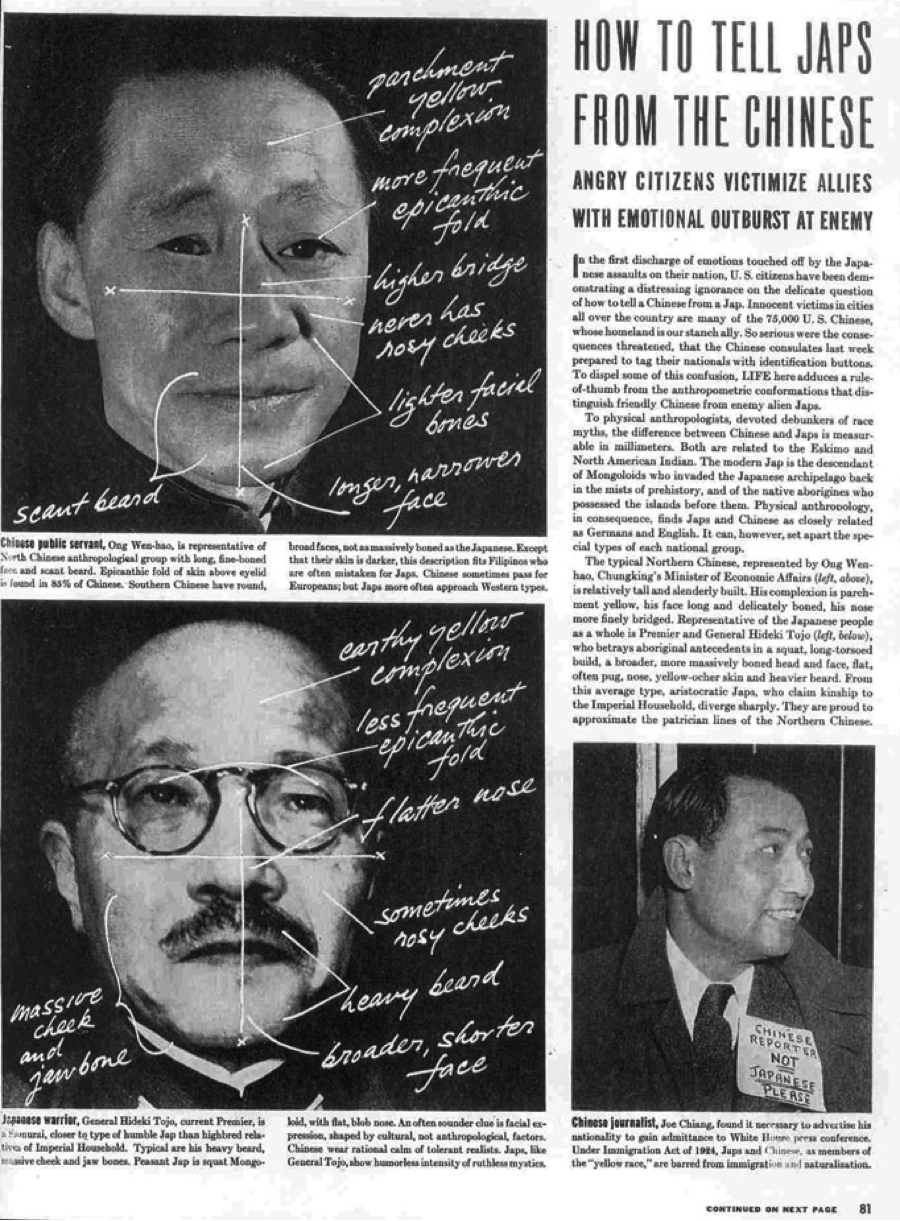 The Nephite Racism Towards the Lamanites

Last week we had a reader write in asking for an explanation regarding the meaning of the wording in the chapter heading of 3 Nephi chapter 2:

Following is my response to the reader’s inquiry that Paul and I thought might be “blog worthy” Let me know what you guys and gals think.   For those interested, click here to listen to a  lively podcast discussion with Dan Wotherspoon PhD in Religion, Brian Dalton (Mr. Deity), and Dr. Charley Harrell (author of  ‘This is my Doctrine:  The Development of Mormon Theology) regarding this very issue:

When looking at the Book of Mormon, it is important to understand that the headings before each chapter are not part of the original revelation but were added much later as an editor’s summary, not Joseph Smith’s. That however doesn’t answer the issue.  If one holds to the historicity of the Book of Mormon, there are a few ways in which the racially charged passages of the Book of Mormon can be interpreted.

When the descriptor “Lamanite” is used in the Book of Mormon, it is used in two different ways:

Let’s explore the first descriptor, that of belief.

In 3 Nephi 3:10-11 we find Nephite dissenters, who had joined forces with the Lamanites, claiming the same foundational story as the “Lamanites”. Yet, there is no mention of the Nephite dissenters’ color changing:

“…that this my people may recover their rights and government…”

Now, let’s explore the second Lamanite descriptor, that of skin color. The issue of skin color first raises its head in 2 Nephi 5:21:

We also read in Jacob 3:8 the prophet, Jacob, saying:

“O my brethren, I fear that unless ye shall repent of your sins that their skins will be whiter than yours, when ye shall be brought with them before the throne of God.”

There are several ways to approach the skin color as it appears in the Book of Mormon. I will provide you with a few possibilities and then let you know what I believe is the most plausible. First, the skin color is seen as metaphorical. There is Biblical precedence for this view:

Job 30: 30
“My skin is black upon me, and my bones are burned with heat.”
Jeremiah 8:21
”For the hurt of the daughter of my people am I hurt; I am black; astonishment has taken hold on me.”
Lamentations 4:8
Speaking of the estate of Zion as being pitiful because of sin and iniquity “Their visage is blacker than a coal….”
Lamentations 5:10
“Our skin was black like an oven ….”
Joel 2:6
“…all faces shall gather blackness.”
Nahum 2:10
”…and the faces of them all gather blackness.”

Here we see the blackness as either a metaphor or an idiom for sin or for sorrow/gloom. Nephi could have been using the same idioms. The problem with this view is that while the Biblical text reads as metaphor, the verses in the Book of Mormon that speak of skin color do not.

The second approach is a literal approach. To hold this view one would have to believe that God actually does change people’s skin color when he curses them. To believe this, one has to believe that God himself is racist. I, being a descendant of Mayan ancestry, would also have to hold to the idea that I am cursed as I have dark skin. I do not hold to this view.

Jarom 1:6 “and they [the Lamanites] were exceedingly more numerous than were the Nephites; and they loved murder and would drink the blood of beasts.”

Enos 1:20 “…and they [the Lamanites] became wild, and ferocious, and a blood thirsty people, full of idolatry….wandering about in the wilderness with a short skin girdle…..and many of them did eat nothing save it was raw meat….”

“From what we know about still existent societies with a similar way of life [hunter-gatherer], such as the Australian aborigines, concentrations of populations larger than the small band were quite impossible. [It has been] estimated that on this level of development, corresponding roughly to the Upper Palaeolithic of Europe, 25 square miles of territory are required for the support of one person.” (Dr. Michael Coe, Mexico; Second Edition, pg 28)

“[It has been] demonstrated that the density of population of peoples on the Neolithic (or Formative) level of food-getting is 25 times greater than the figure for primitive hunters and gatherers – the domestication of plants and animals obviously resulted in a quantum increase in the world’s population, no matter how long the process.” (Dr. Michael Coe, Mexico; Second Edition, pg 52)

So how do the social sciences inform our interpretation of the Lamanite people found in the Book of Mormon? What we are dealing with here is a racial caricature of the Lamanites by the Nephites. To be as large of a group as the record describes them, two things need to occur. First, it is quite possible that the Lamanites assimilated into the greater, already existent, society of Meso-America; it is estimated that there were about 1,000 people living along the coastal area where Lehi probably landed in Guatemala (Brant A. Gardner, Second Witness: An Analytical and Contextual Commentary on the Book of Mormon, six volumes (Salt Lake City, UT: Greg Kofford Books, 2007), 2:8). Thus the “Lamanite” became a description of what is sometimes called by anthropologists as “the other.”  It did not necessarily mean just the descendants of Laman, Lemuel, and the sons of Ishmael. That would account for the Lamanites being “exceedingly more numerous” than the Nephites. Second, to be such a large group, the Lamanites had to be a society that relied on agriculture, not wandering around “eating nothing but raw meat.”  The Nephite description of the Lamanites is that of a hunter-gatherer society.

“U.S. citizens have been demonstrating a distressing ignorance on the delicate question of how to tell a Chinese from a Jap. Innocent victims in cities all over the country are many of the 75,000 U.S. Chinese, whose homeland is our stanch ally. So serious were the consequences threatened, that the Chinese consulates last week prepared to tag their nationals with identification buttons.”

To dispel some of this confusion, LIFE here adduces a rule-of-thumb from the anthropometric conformations that distinguish friendly Chinese from enemy alien Japs.

“To physical anthropologists, devoted debunkers of race myths, the difference between Chinese and Japs is measurable in millimeters. Both are related to the Eskimo and North American Indian. The modern Jap is the descendant of Mongoloids who invaded the Japanese archipelago back in the mists of prehistory, and of the native aborigines who possessed the islands before them. Physical anthropology, in consequence, finds Japs and Chinese as closely related as Germans and English. It can, however, set apart the special types of each national group. 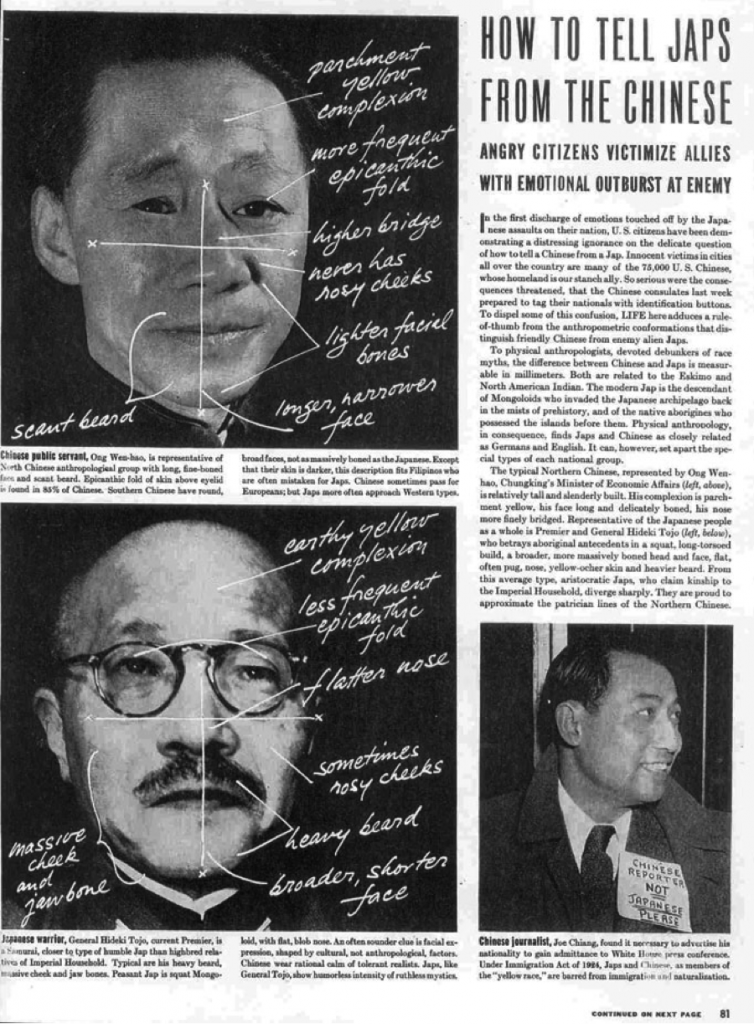 “The typical Northern Chinese, represented by Ong Wen-hao, Chungking’s Minister of Economic Affairs (left, above), is relatively tall and slenderly built. His complexion is parchment yellow, his face long and delicately boned, his nose more finely bridged. Representative of the Japanese people as a whole is Premier and General Hideki Tojo (left, below), who betrays aboriginal antecedents in a squat, long-torsoed build, a broader, more massively boned head and face, flat, often pug, nose, yellow-ocher skin and heavier beard. From this average type, aristocratic Japs, who claim kinship to the Imperial Household, diverge sharply. They are proud to approximate the patrician lines of the Northern Chinese.”

In summary, the most plausible interpretation of the issue of skin color (as you read in 3 Nephi 2:15) is that it was more an issue of the racism that the Nephites held against the Lamanites; there was no actual change in skin color. One should not be surprised that someone from the 7th century BC through the 5th century AD would hold such horrible racist views. In fact, one of the reasons that Jesus’ parable of the Good Samaritan is so powerful is because of the racist views that Jews held toward the Samaritans.