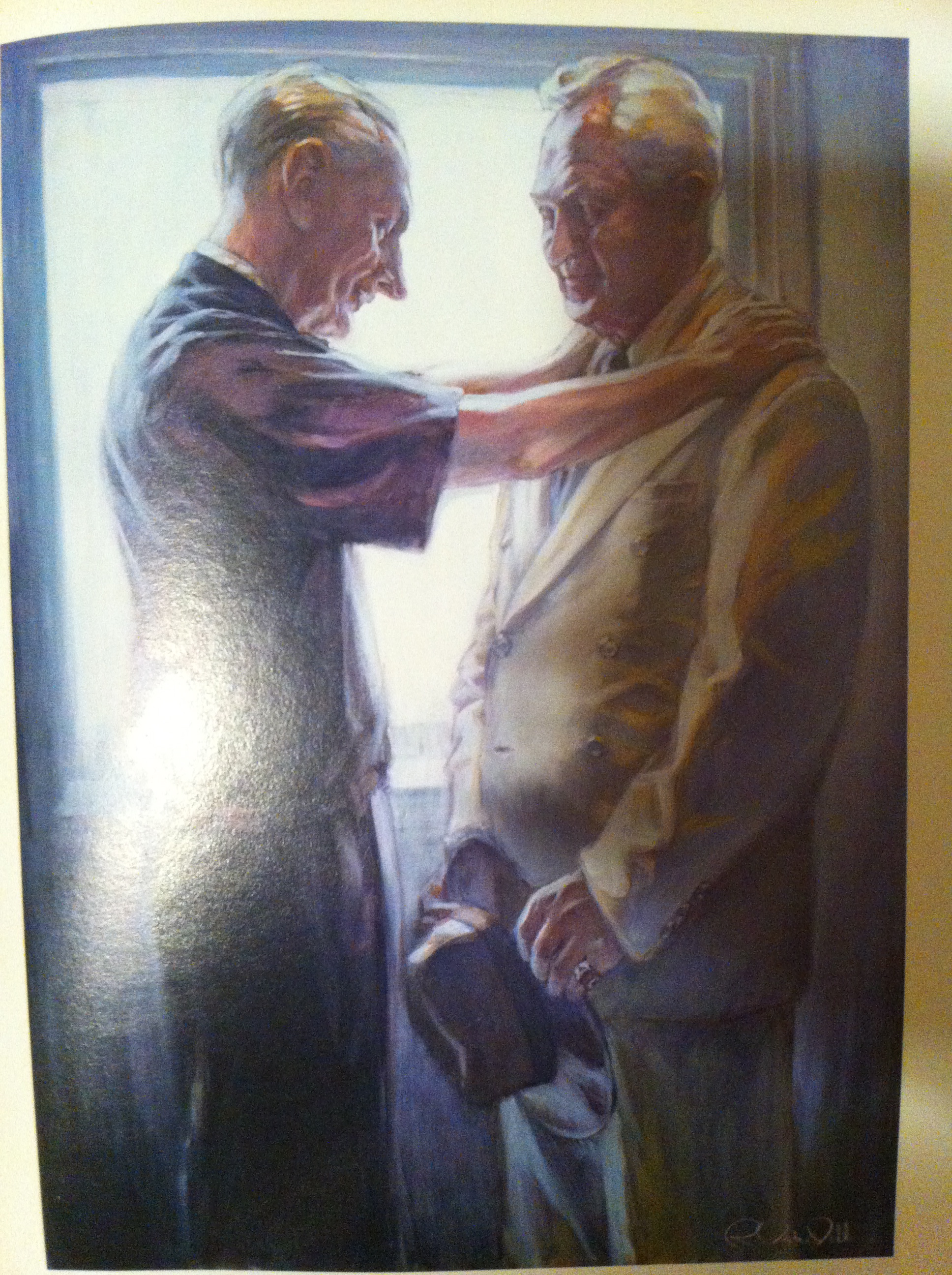 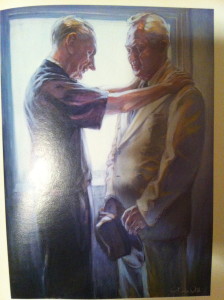 The scope of this paper is not to provide commentary on the many well known theological positions where the LDS theology intersects with that of the historic Christian faith but to provide the reader a quick synopsis and overview of our common Christian heritage which even extends into some of the theological concepts that seem to divide us.  What often may seem to be a contradiction at first glance can have some common elements that are not always recognized.

One of these is the concept of God’s progression.  Process theologians such John Whitehead have brought forth the open theistic idea to show that God and nature do change and grow with creation.  Process theology is rejected by special creationists and other fundamentalists but is advanced by a few adherents in the liberal camp.  This theology represents God’s creation as having a dynamic quality that always moves forward and will result in God being in everything in perfect glory.

The system of open theism is where deity leaves his creation to go its own way until it strays so far that he has to realign its progress with his ultimate goal (see Reinhold Niebuhr); and is often promoted to show that God is much more a personal entity with a corporeal existence in the spiritual realm to relate to His creation as a father to his offspring.  Articles such as this are in the biblical quarterly “Process Theology” and are cited in my PhD dissertation, From Sacral Kingship to Sacred Marriage – A Theological Analysis of Literary Borrowing.

The Nature of Man

The eastern churches of Christendom along with the LDS and liberal scholars tend to reject Augustine’s notion of Original Sin.  Matthew Fox terms this concept as Original Blessing.  During the fall, man was expelled from Paradise through a covenantal curse.  This does not make mankind evil but only separated from God which leads to sin and brokenness.  Master Ekhardt echoes this teaching in his writings.  Helmut Thielicke questions the doctine’s validity.  Most Anglicans reject this outright due to Rome’s connection with Augustine.

The Orthodox Church of the East coupled with Coptic, some Old Catholics and the Ethiopian and Syrian Orthodox Churches, generally hold to the open canon concept where longer versions from Constantinople of the Book of Acts are seen as fully canonical.  Modern scholars such as James Sanders formerly at Claremont, taught the Old Testament was not closed under Ezra and the Great Synagogue; but Ezra may have acts as general editor of the Hebrew Bible.

The Eternity of the Family Relationship

In ancient times, young Hebrew couples would wear crown on their heads during the wedding ceremony to show the rulership  they would someday share in God’s Kingdom.  Scholars such as Stovanic maintain the thrones that we will someday occupy will function as love seats for the newly enthroned people of God.  This concept also is a belief of many Orthodox Catholic Christians.  In the journal of St. Vladimir’s Theological Quarterly, this subject is often featured and cites the tradition where bishops wear a crown during their consecration as part of the hope of our future reign.   It is believed that marriage is a precursor of this royal diadem that we will receive in the world to come.  This act is symbolized when a marriage is consecrated by a priest or bishop by the binding of their hands together with a sash which extends from the vestments.  The meaning of the ceremony shows the love the couple shares from the eternal nature of God which will survive this age and will continue to grow in the age to come of the Economy of God.

The World to Come

Latter Day Saint theology stresses the fact that man will reign on the earth in the Celestial Kingdom.  This ancient Jewish concept also echoes through various Christian traditions.  Here are a few:  the Anglican churches including their theologians such as N. T. Wright; Presbyterians and Reformed traditions also with their scholars such as Dale Bruner and Herman Ritterbaus who represent this stream of kingdom theology as well as other evangelical scholars such as George Ladd.

The Non-Trinitarian Concept of God

These concepts are not within the mainstream of Christian thought but are certainly debated on a scholarly and academic level.  The challenge here is that these scholars will attempt to dismiss the Christian tradition of a high Christology while others in the eastern church tradition such as Stanley Burgess, will maintain the western church has misappropriated the use of the Trinitarian concept.  Roy Blizzard has stated we should dispense with the term altogether because it no longer represents its intended meaning.  Asherah is seen as within God’s Mighty Council by scholars in the Doctrine of Deities and Demons (DDD) as the Old Testament reports.  Was she demoted by Yahweh and told to keep quiet for “I, alone am God, there are none beside me”?  Some LDS researchers assert that by using the Ugaritic prominence of Asherah, the Old Testament is a later redaction to promote the message of Monotheism.   Feminist scholars such as Marilyn Stone and Rosemary Ruther connect her to the Divine Feminine. 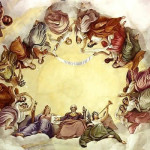 The Apotheosis of Washington is the fresco painted by Italian artist Constantino Brumidi in 1865 and visible through the oculus of the dome in the rotunda of the United States Capitol Building.

The LDS position is based on the doctrine of the exaltation of man while the Orthodox position is based on God being All in All by divining his creation to replicate His Divine Essence.  Man will certainly be exalted due to God’s saving actions in fulfilling the final enthronement of reconciliation.  God will share with man all He has created and we will become the Sons and Daughters of the Most High.

The Celtic Church of Britain and America has long been aware of the Ten Lost Tribes that migrated to Northwestern Europe during the days of Zedekiah.  Several migrations through the span of time from the Assyrian Empire also paved the way for settlements to be developed in Western Europe.  Dr. Gene Scott develops this theme from the great city states migrations.  James Rand traces this development from Zedekiah.  Cleon Skousen expounds this theme from the Yinglings moving west into Wales and Ireland.

The old liturgies around Passover/Easter season talk about the priest standing at the door and knocking with a golden hammer to be let into the spiritual temple of God’s Holy Place.  This rite fulfills the book of Revelation salutation “Knock and the door shall be opened”.   The priest wears an under garment which comes from the Syrian traditions where a new name was given to each congregant after baptism.  New white garments were issued to show the purity of the disciple’s baptism.

The sacraments of Baptism, Marriage and Priesthood Orders which include the Lord’s Supper are common in many spiritual and religious traditions.  The Lord’s Supper, sometimes called the Eucharist or Thanksgiving, can be administered with water or wine according to historical canon law.  This is because these substances were used on the altar within Israel’s ancient temple.  The wine libation was the symbol of a covenant meal celebration while the water poured over the altar showed a cleansing action for the citizens of Israel.  The House of God and other Hebrew Roots traditions will also use water during their Passover service.  Today’s liturgical church practice dictates that water may be used where no wine is present to officiate the sacrament.

Resurrection and Salvation in the Afterlife

The LDS position is that our loved ones and citizens of the human race may experience salvation and exaltation in the afterlife due to the rite of Baptism for the Dead.  Early Roman Catholic apologists felt Purgatory would serve as the “holding tank” for the perfection of the soul.  Today’s scholarship sees a growing amount of evidence to suggest that during God’s judgment an opportunity for repentance will be granted to those who never had an opportunity to complete the salvation process in this life.  Even some Evangelicals such as Clarke Pinnock and Wayne Grudem  with other sectarian Christian apologists have advanced this theme as well.

How much closer could both sides of the adherents of these issues be if we would simply speak to each other in an informed and loving manner?  Latter-day Saints reject the general Body by saying we are apostates and our sacramental practices are to be rejected because the apostasy shows, in their view, that God used white out during 18 centuries of church history.  Scholars such as Van Unnick agree there was a falling away, but God still continued to act in His great missionary and salvational enterprises outside the control of the Roman Church.  Hugh Nibley, a wonderful and gifted LDS scholar, suggested in his article “When the Lights Went Out” that God continued to act until the light was extinguished.  Other LDS scholars during many symposiums have stated God acted to prepare Christianity for its restoration.  So, maybe, if the Church of Jesus Christ of the “Former-Day Saints” against which the gates of hell did not prevail, can develop a track of ministry service with Holy Orders into shared ministries with the Latter-day Saints, we can both fulfill the offices of our high calling.    The traditional church needs to follow the admonition which was given in Salt Lake City on Joseph Smith’s 200th birthday by Ravi Zacharias, an evangelical scholar who spoke at the Tabernacle on Temple Square, when he stated the Christian church owes you a great apology for we have judged you rather than evaluated what your church is really saying to us but please return to your founder’s statement that any man who is under the Grace of God in Jesus may receive eternal life.  And that salutation is something believers everywhere can agree upon.