Review of Religion of a Different Color 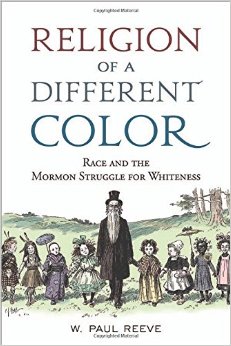 When J. Kameron Carter, one of the more compelling theologians of black spirituality today, was asked about the shooting of Trayvon Martin, he argued that Christianity must “reckon with the fact of how our churches in many ways reproduces the very social structures that created the conditions for what happened.” The world in which we live, he continues, is “built on a logic of separation, wants to manage who belongs to who, how social belonging can work.” Race is a “social management” and a “conceptuality” to dictates those to whom we belong and those from whom we are alienated.[1] When these social orderings come under interrogation, it compels racially-oriented societies to redraw lines and networks.

In W. Paul Reeve’s book, Religion of a Different Color: Race and the Mormon Struggle for Whiteness, we see exactly how tenuous of a conceptuality race is, how fluid and porous it can be. Two generations of critical race theory have taught us nothing else, it has shown us that race can mean everything and nothing, depending entirely the forces circulating the racial communities in question. Reeve argues that Mormonism represented more than a strain of religiosity in nineteenth-century America; it also served as a prism revealing how complex racial attitudes could be.

Reeve’s work dovetails–and in some ways, contrasts–nicely with James O’Toole’s work, Passing for White: Race, Religion, and the Healy Family, 1820-1920, in which O’Toole uses the family history of the Irish immigrant, Michael Healy and his slave wife, Eliza Healy to show how a mixed race family could convince their social networks of their essential whiteness[2]. And certainly, if a partially African family could do it, then, at the least, racial identity was an arena for contestation as much as it was a system of categorization. Yet for the Healys, racial divisions continued to exist; theirs was to trade one racial identity for another. Reeve’s work illustrates that racial divisions were not reified in American society, but that Americans wanted them to be reified, and desperately so. They struggled to know who the Mormon people were, to categorize them, to map them out in the same way that any imperial power seeks to identify its subjects. But the theologians, statesmen, scientists, and pundits grasped through this maze of racial identity in vain, finding themselves stumbling over themselves and their own assumptions rather than coming to know who the Mormons actually were.

Reeve argues that Mormonism troubled white Americans not merely as a religious system but as an alternate, almost-incomprehensible racial identity. Though Joseph Smith was a thoroughly Anglo-Saxon child of Puritan stock, declaring revelations and compiling them into holy volumes placed him squarely in the “Oriental” tradition as white Americans imagined it. When the poor, white Saints of Missouri fraternized with the poor blacks of Missouri, local papers recoiled at the sight, calling the Saints nothing better than “black Mormons.” As Reeve shows, whiteness extended beyond visual cues for nineteenth-century Americans. For most Americans, whiteness was a way of life, a way of speaking, and a way of worshipping. As Reeve observes, “those Americans who racialized Mormons did not neatly organize their views in ways that always fit into one child or another’s family tree.” Americans simply “did not always know how to think about Mormons and race” and “shift[ed] almost randomly between racial groups with no firm notion of a specific racialization in mind” (13). Mormons did not do the things expected of white Americans; this much was sure. The ambiguity left  white commentators seeing the Mormons less as fellow whites and rather, some kind of racial outcast that  had forfeited the right their right of access to white privilege. So a multi-theater war for whiteness it was, as the Saints fielded attacks on their racial identity from all quarters.

Reeve dissects Mormons’ nineteenth-century racial identity into three categories: “Red,” “Black,” and “Oriental.” The first category derived from Mormons’ distinctive (though not unique) theology and relationship regarding the indigenous American populations.   As believers in an America upheld by indigenous peoples, Mormons rejected the assumptions about Anglo-Saxon expansion throughout the American continent.

The second lens Reeve uses—blackness—highlights that enigma of a subject, the Mormon relationship with the black community. Few are the topics in Mormon history in which the deficiency of public awareness has proven so resilient or enduring. Reeve does an excellent job of situating Mormon racial attitudes towards peoples of African descent against the broader Mormon impulse to respond to the onslaught of racial attacks leveled against them by commentators looking to associates Mormons with racial impurities. His treatments of the priesthood restriction, interracial marriage, and slavery in Mormon society are concise and well-researched. Yet the Mormons’ closeness to the black population was a superficial connection, at best. In 1833, when Missourians mobbed Jackson County Mormons in part for Phelps’ invitation to blacks to come to the state, it did not take long for Phelps to distance himself from the black community. Within a few months, he had declared an exclusionary policy against all blacks and by 1851, Phelps had embraced a pro-slavery platform with some vigor.[3] In the wake of the 1838 persecutions, Parley P. Pratt wasted no time in attempting to show Mormons were an essentially white religious community, with almost no black members. Reeve is right, then, to depict race as a conversation defined by conflict rather than clarity. Mormons reacted, retrenched, and responded—far more than they declared, decreed, and heralded.

Finally,” in his chapter, “Oriental, White, and Mormon.” Reeve demonstrates how American commentators associated Mormons with both Chinese immigrants and Middle Eastern Muslim sheiks alike. Whether pastors such as Talmage DeWitt pointed to the hope for a sea of Chinese converts or the Supreme Court associated Mormon polygamy with “Asiatic” practices, the better part of nineteenth-century American voices concurred that Mormonism fit better within the tradition of “the Orient” than within the enlightened, civilizing influence of Anglo-American society. But did “the Orient” even exist? Only in the minds of British and American imperialists seeking to understand the global community as entities of polar opposites between West and East, civilization and “barbarism” (which was the bête noire of the Republican Party in 1856, given their call to eradicate its “twin relics” of slavery and polygamy).

As I read Reeve’s work on the “Orientalization” of Mormons, the colonial relationship between metropole and subject popped up again and again. Edward Said argued that the imperial relationship relies on an assumption that “‘we’ [the imperial force] know it and it exists, in a sense, as we know it.” The “Orient,” Said observes, was “something one judges (as in a court of law), something one studies and depicts (as in a curriculum), something one disciplines (as in a school or prison), something one illustrates (as in a zoological manual).”[4] In each instance, the “Oriental” is “contained and represented by dominating frameworks.” Reeve illustrates how Mormons went from being a fringe religious group to an ethnographic subject for policymakers in Washington, not much different from other colonial subjects.

Indeed, what American commentators were doing fit well within-established colonial discourse; British and French newsmen made ready sport of casting aspersions on the Indian and Senegalese colonials. Americans wanted—badly—to know how they could fit Mormons within the racial hegemony that they felt they knew so well. They believed that they knew “their blacks,” “their Cherokees,” and even “their Chinese.” But “their Mormons?” Much less so.

Consequently, it would have been useful for Reeve to highlight how American discourse regarding Mormonism fit within broader, global currents of imperial discourse towards racialized subjects. Since a large contingent of Mormons hailed from England, such discourse fit well within their cultural background. Historians such as Thomas Metcalf and Catherine Hall offer compelling treatments of the racialization process within the British Empire in both colonial India and colonial Jamaica, focusing in particular on the role of anthropologists and missionaries in creating the colonial Other.[5] Were the efforts of American anthropologists and politicians to construct the colonial Mormon Other much different from those of British anthropologist Henry Maine in constructing the colonial Indian Other?

By the turn of the twentieth-century, the Mormons began to win the battle to earn the label of “white.” Having given up polygamy, Americans began to see Mormons less as a nefarious impediment to the spread of American “civilization,” but instead, as a bedrock of white America believed to be under attack from a new wave of Eastern and Southern European immigrants. By the mid-twentieth-century, Mormons had won the coveted status as white Americans, just as the white establishment started to crumble in the face of the civil rights movement.

These few minor critiques aside, Reeve’s work presents a powerful analysis of Mormon and anti-Mormon racialization processes. Deeply-researched and socially relevant, to say that Reeve’s work marks an important step forward is an understatement. It subverts the very foundations we use to conceptualize what Mormon identity was. It compels readers to dismantle American racial identities they once considered to be reified and stable. It demands that we see the narrative thread of nineteenth-century Mormon history not merely as a struggle for religious freedom, for theocracy, or for the rights to marriage. Reeve shows that the attacks on the Mormon community amounted to a race war by other means, a vicious attack to define, regulate, and Otherize a religious community that deviated from the accepted wisdom of American society.

Reeve’s book is important reading for all seeking to understand the complex racial waters in which the Mormon community has navigated for the past 185 years.
[1] J. Kameron Carter, episode of Office Hours, https://www.youtube.com/watch?v=4Z0bKi0Keog, April 5, 2012 (accessed July 9, 2015).