An Open Letter to the Saints 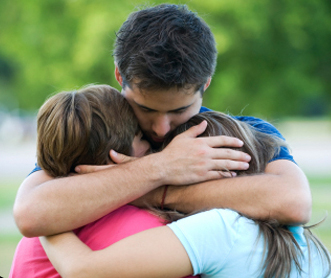 I hurt right now. I hurt for confused friends, for family members, and for people who have experienced such deep resonance and spirituality with the messages of John Dehlin and Kate Kelly.

John Dehlin and I have publicly–and vigorously–debated fundamental differences.  I hold the same views on those issues today that I did six months ago, and there is a long list of serious differences between my views on LDS doctrine and John’s.

But don’t you see? That. Doesn’t. Matter. It never has.

When I was a boy, I grew up in a little Mormon village, a village so small that the U.S. Census considered it to be “frontier” territory as late as 2000.  The first experience I had with hearing about excommunication was with the village intellectual of sort. I always thought him a compelling figure. With the rustics of a frontier man and the intellect of a scholar, he was a compelling man.* We liked him.

A couple years later, it happened to my priest’s quorum adviser whose son I had a few good times with playing Monopoly in an old, musty trailer in the back lot.  When I learned of it from my parents, they did not seek to make it into a lesson. They did not try to make them into an example. My father just bowed his head in sorrow, frowning at the tragedy of it. After all, he had been involved in the proceedings.

Last year, I wrote a piece called “Faith Crises: A Believer’s Guide,” in which I suggested a few things the rank-and-file faithful could do to help those experiencing hard questions about their relationship to the Church. But excommunications are a different animal. For believers, it’s a protective action for the Lord’s flock. For the excommunicated, it’s an act of organizational violence that exacts a soul wound deeper than most recognize. But for all, it’s a tribal action, a drawing of the line in the sand. As searing as faith crises are, excommunications call for a particularly large dose of understanding. Faith crises raises some eyebrows, but excommunications raise blood pressure and indignation.

But this needn’t be a taboo, a social stigma, or an awkward conversation.  Some of us may never even know an excommunicated person in our lifetimes, but all of us can become better at befriending those who have gone through this harrowing experience.

1. Chances are, they have not permanently lost their status as an heir to the Kingdom. The person you’re raging against as a wolf in sheep’s clothing? More often than not, they have families, children, spouses.  Whatever their failings, if they continue to be committed to their families, they are still emulating God in some manner.  They’re doing something right.  Maybe someday they’ll come back. Maybe they won’t. But if we’re true believers in the universality of the Mormon message, then we believe that God judges us based on what we are striving to accomplish more than merely some Facebook statuses.   I don’t know what the long game is when it comes to these kinds of things. However, I share President J. Reuben Clark’s views in this matter: “I believe that in His justice and mercy He will give us the maximum reward for our acts, give us all that he can give, and in the reverse, I believe that he will impose upon us that minimum penalty which it is possible for him to impose.”

2) Tribalism is not good. When I dared to interview Chelsea Shields Strayer of Ordain Women, one acquaintance whose total correspondence with me in several years consisted of a few lines questioned my faithfulness for even giving her airtime, a little like the experiences Dirty Jobs star Mike Rowe has faced in sharing his message with pundits of all ideological stripes.

But tribalism, it’s so tempting. And validating! We tend to get a buzz out of administrators drawing a line. But I will always remember the look on my father’s face when he told me about some of the cases he handled. It was not a look of excitement or fulfillment at having “defended the flock.” It was a deep frown of sadness, his eyes teeming with pain.  It was not a happy day.  Those who are still in the faith should find no fulfillment, no satisfaction, no joy at seeing a once-Saint removed from the membership rolls.

3) Remember the heretic within.  Rank-and-file members often like to think of themselves as “the hard-working Mormons” in the same way politicians use the phrase “hard-working Americans.” It’s a phrase that comes with a certain sense of entitlement. Perhaps you expect people not to ask hard questions of you because you put in your time. Perhaps you don’t really care about doctrine.

But in truth, we all enjoy our little heresies.  Not long ago, I cited President Spencer W. Kimball’s talk warning about the excesses of patriotism when the teacher asked us to name idols that we worship. The Sunday School teacher literally hushed me.  I dared to cite the Prophet on an unpopular topic.  Before we start patting ourselves on the back for not being like the disfellowshipped, let’s remember that by the Lord’s standards, we would all be expelled from heaven given our current state.  So whatever happens, pride continues to be the “universal sin.”  We don’t suddenly get a pride pass because someone we dislike is about to lose his membership.

4) Love, love, love. When we rage about how needed the excommunication was (or whatever), we do nothing–absolutely nothing–to help anyone come closer to Christ. This is not a joyous occasion. Every loss is a tragedy. Every soul can bring so much to the table.   We care about people’s talents, abilities, and potential.  To self-assuredly pass character judgment of people  whom we know not outside a lineup of Facebook statuses and podcasts is more revelatory of who we are, not of who they are.

If you’re upset about their going to the press, well, I suppose they might be doing it for validation, for image-making, or whatever.  But if you’ve never felt victimized or hurt and wanted people to know about it, then I have a stone waiting right here for you to throw. Pick it up. I dare you.

In any given disciplinary hearing, I, the average lay member, am profoundly ill-equipped to draw any conclusions worth anything at all. My opinions don’t even deserve the title of opinions. When it comes to excommunications, I harbor a profound agnosticism; authenticity dictates that I must.  Even Elder Boyd K. Packer has acknowledged that “human nature may express itself” in the administration of Church matters. And I can only express my faith that the second part of his formulation proves true: “but not to the permanent detriment of the work.”

In these two cases, I know one of the parties personally and not a single member of the disciplinary council.  What I do know are  assumptions. Half-formed impressions.   And most fearsome of all, gut instincts. Gut instincts may work in dealing with your kids or your spouse.  But in a matter that deals with the spiritual and social life of a complete stranger?   Those aren’t good enough.  And to use them in trying to describe another person’s spiritual journey? Nothing but a petty indulgence in self-vindication. So say what you will about “the right of an organization to draw its lines” (or something to that effect).  Whatever our relationship with the LDS Church, it’s obscene to use this event as an opportunity to stand in applause in the same way that we might at a war rally.

As my dad stood over the counter that day, there were no self-assured declarations of tribal solidarity. We had lost a brother. There was nothing to celebrate.

*This persona is fictionalized to protect his identity.