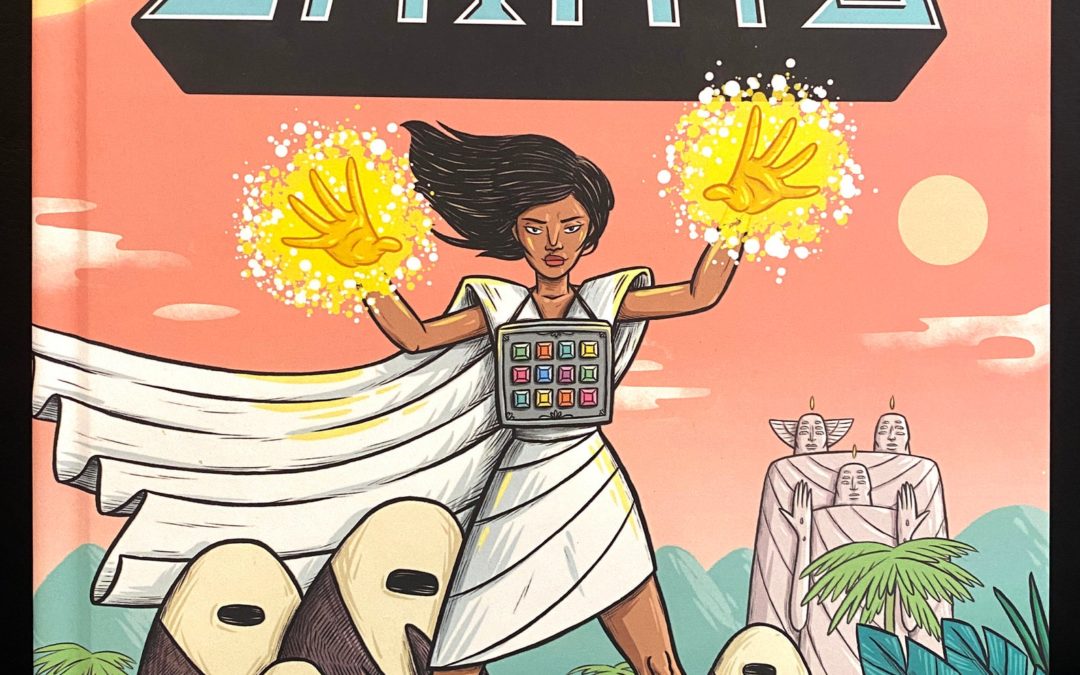 If you’ve been following Mormon culture for the last few years, chances are you’ve heard of Matt Page. Whether it was through his amazing Mormon-themed photoshop memes, or his prayer candles for important individuals in Latter Day Saint history, or General Conference Cat, the world has benefitted from Matt’s unique perspective and his ability to personalize his religious and cultural experience through art.

Matt recently announced a project that would blend elements of Mormon history and culture with science fiction and fantasy, all within a beautifully rendered, nostalgia-inducing retro comic aesthetic, The Future Day Saints series seeks to explore Mormonism in other contexts- in this particular case, 1000 years in the future, on an alien planet. I had the great pleasure of asking Matt about his latest project, which can be pre-ordered before June 5, 2020, here.

Tell us about how the Future Day Saints came about. What inspired you to create this series?

It started when I was doodling ideas for Mormon themed action figures I could design and possibly one day produce and decided to play with some of the weird and fun ideas from Mormon history and folklore. I then started forming a team of heroes and a team of villains and writing backstories for each character. Eventually I put the idea of toys aside (temporarily) because I wanted to tell stories with these characters. And that ultimately become the book Future Day Saints: Welcome To New Zion.

What would you say are your main creative influences for this series?

I am a pop culture geek and I’m especially a big fan of the 80s cartoon and toy franchises I grew up with like Bravestarr, Thundercats, and Masters of the Universe. So I used those as my main source of inspiration. I tried to create a futuristic sci-fi Mormon mythology using those franchises as a roadmap for the storytelling. I also got a lot of design ideas from ancient Mayan art.

Back in the 80s they would release books annually in the UK from all of the popular cartoon series. They are called Annuals and they are 8”x10” hardcovers that contain multiple short stories in both comic book style and storybook style (one illustration per page). And I tried to follow that format as closely as possible for my book.

The story is centered about a world called New Zion, populated by aliens who are sheep that are “not of this fold”, or the Othersheep. Tell us about the Othersheep.

The Othersheep are the indigenous people of New Zion (a planet in the Kolob solar system). They got their name around 3,000 years ago (this story takes place in the year 2929) when they were visited by a God who had recently died on his own planet. It’s a reference to John 10:16 where Christ tells the people in Jerusalem “other sheep I have, which are not of this fold: them too I must bring, and they shall hear my voice: and there shall be one fold, and one shepherd.” I combined that with Joseph smith’s teachings about a multitude of planets inhabited with our spirit siblings and in my story, after visiting the people of earth, Christ visited those other planets so they could hear his voice and start preparing to one day become one fold.

So it’s not just the Othersheep who inhabit New Zion. Different groups (or tribes) of alien races from all over the galaxy (including the humans of Old Earth) have since gathered there to build up the kingdom together alongside their Othersheep brothers and sisters.

You mention that the Othersheep often portray their Celestial parents as aliens. Tell us about the decision to do so, and the concept of The Unity.

Each different alien race on New Zion had portrayed the Savior in their art to look like them. The Othersheep painted him to look like an Othersheep and then when the other alien Zioneers showed up, they brought art where Christ is painted to look like them. This was inspired by the way Europeans historically painted Christ to look European – a stylistic choice that is not only historically inaccurate, but is still prevalent in the LDS church’s logo and authorized foyer art.

Seeing images of Christ portrayed as an alien is jarring, but I suppose the Lord himself might also find it a little jarring to see paintings of him as a big handsome white guy with straight hair and blue eyes.

There are heroes and villains in this world: The Valiant are the heroes, and the Curses are the villains. Can you introduce us briefly to each of the characters?

Liahona is the leader of the Valiant, the de facto leader of New Zion, and the last living holder of the Power of the Priests, which manifests as super powers like energy projection, telekinesis, and telepathy.

Z is a 9 foot tall skeleton from Old Earth, He is the seer of New Zion and as such, is the steward of all of the seer stones from around the universe. He uses them by popping them into his empty eye cavities.

Triple Combination are the historian, record keeper, and strategist of the Valiant. Because they have three heads (in the mouth of 2 or 3 witnesses shall every word be established) it might be easy to confuse them with the Three Nephites of Old Earth. But while they are both part of the same universal archetype, Triple Combination is actually from a different planet all together.

Dr Sunstone is the team doctor. He may be short, but his stone-like hide makes him nearly invulnerable.

Lady Elect is a mysterious and deadly Othersheep assassin who wears a prairie dress and bonnet.

Good Bishop rounds out the team of heroes. He’s one of many community leaders charged with serving and making sure the residents of New Zion have all their needs met. He is a great guy, but he is almost identical in appearance to one of New Zion’s most wicked villains.

Now on The Curses…

Morning Star is the leader of New Zion’s team of villains. He’s a being of light who has power over the water and ability to transform into a snake.

Mister Cain is Morning Star’s right hand man. He’s snuck aboard the evacuation ark as it left Old Earth for new Zion. He is sneaky, secretive, covered head-to-toe in hair, and is roughly as tall as a man on horseback.

Natural Man is a hulking brute which lives both in the world and of the world simultaneously. He is an enemy of God.

Kinderhook is an unsettling spirit who if you offer him your hand, will offer his back, but your hand will then go right through it.

Hot Drinks is irritable, insulting, and very dangerous. She is as quick with a cutting insult as she is with her broadsword.

The last of The Curses is the one I was alluding to before. His name is Bad Bishop and he is not to be trusted. Whatever you do don’t mistake him for his righteous doppelganger, Good Bishop.

All of the characters are rooted in Mormon folklore. Do you worry about whether non-Mormons will understand the more obscure references?

I don’t. I think it can stand alone as a sci-fi story of good vs evil. It obviously has a religious element that would feel familiar to Mormons, but I think it would still work as a spacey sci-fi version of Christianity to non-Mormons. For example, Heavenly Mother has a prominent roll in their version of the Godhead. Mormons will know what that’s about, but non Mormons will still understand it and see it as a natural progression of the idea of God as a heavenly parent.

Do you feel like the stories have a particular message that you want to share, or is it more a fun exploration?

I explore a few different ideas in this book. One is looking at the history of Mormonism and how much the church has changed in the last almost 200 years, I wanted to play with how much more it could change over the next 900 years. What systems/organizations are no longer in place (there is no organized church structure), what ideas and beliefs would evolve (the Godhead including the Celestial Mother alongside the Celestial Father and Son), etc. Another is the idea of what it really means to be created in God’s image.

But like the cartoon stories that inspired this world, I hope that this book has an underlying moral lesson that gives you something to think about. I think that lesson is about the importance of seeing our fellow man as a spirit sibling.

When will Future Day Saints be available for purchase?

It is available for preorder here on my ETSY shop. If people are willing to pay for it up front, it will allow me to order more copies and get a discount on the printing without having to pay all of the money up front myself. The preorder ends Friday, June 5th and you can expect the books to arrive sometime in July.

What are your plans for the Future Say Saints? Is this meant to be a standalone book, or will there be a series?

The plan is that this book is just the beginning. I have already plotted out and outlined the entire second book, which I hope to start illustrating this fall. I have also been working on a set of trading cards and hope to have at least one action figure sculpted before the end of the year.