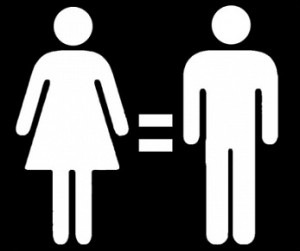 All of my life I have believed that Celestial Kingdom is a place of equality. In the last ten years, I have become aware that some women do not believe that they have the opportunity to become like Heavenly Father and that they are limited by their sex. I think some men may believe this as well. In this way of thinking, women can simply not become like men. They are two fundamentally different creatures with different earthly and eternal roles. Exaltation for women involves eternal subservience to men, as the temple suggests. Heavenly Motherhood is a state of eternal pregnancy with the responsibility to care for an endless number of infant spirits. In the minds of some, this the reward for living a righteous life.

And so there are two contrasting ideas of exaltation for women. The version that involves equality and partnership is the one that I find appealing, one that has given me strength and hope for a better world to come. The other one fills me with dread and relies on ideas of eternal gender essentialism. No one reduces Heavenly Father’s value to the size of his divine testicles, and I apologize for being so crude as to reference them. But when referenced, Heavenly Mother is essential for her divine uterus and no apology is necessary. She is only valuable for her body, without reference to her character or divine state.

When I hear these sorts of explanations, it seems like people are trying to make the Celestial Kingdom look like 1950s America, a pre-Civil Rights era where many happily accepted that separate can indeed be equal. I’ve heard many state that a divinely enacted separate-but-equal society is an achievable and wonderful thing that we should be working toward now.

Where is Heavenly Mother in all of this? Though many Mormon feminists wish for a clarification on the issue of Heavenly Mother, this is not just a feminist issue, or even just a women’s issue. It is a church-wide issue. If we want to anticipate the glory of the next life in this one, we need to understand our Heavenly Parents and how they interact with each other. If the next life has a rigid gender hierarchy, like this one, then we should abandon talk of equality of marriage partners. If the next life is an example of gender equality, then we need to move closer to that.

I want to take some time to explore the concept of Heavenly Mother in each situation: equal and separate-but-equal.

We talk about Heavenly Mother in the same way that we talk about women from the scriptures: almost all of them are valuable for the important men that they give birth to. Eve is the mother of all. Sarah gives birth to Isaac, Rebecca to Jacob. Ruth gives us Obed. Sariah gives us two prophets: Nephi and Jacob. Unnamed mothers of the stripling warriors. Elizabeth births John the Baptist. Mary’s womb gives us Jesus. If Deborah or Ester had given birth to anyone important, I’m sure their stories would be lost too. The scriptures are full of moms, but lacking in fully-formed women. It is no wonder that we talk about Heavenly Mother in the same limited terms.

David L. Paulsen and Martin Pulido document references to Heavenly Mother in their 2011 BYU Studies article titled ““A Mother There”: A Survey of Historical Teachings about Mother in Heaven”. I’m going to look at some of the examples they cite.

In 1909, the First Presidency of the Church wrote: “All men and women are in the similitude of the universal Father and Mother and are literally the sons and daughters of Deity.”

This quote would be welcome in the Primary manuals. It emphasizes the parenting roles of our Heavenly Parents and their divinity. In 1991, President Gordon B. Hinckley, then a Counselor in the First Presidency, spoke about Heavenly Mother in  general Relief Society meeting. He taught:

Logic and reason would certainly suggest that if we have a Father in Heaven, we have a Mother in Heaven. That doctrine rests well with me. . . . The fact that we do not pray to our Mother in Heaven in no way belittles or denigrates her. . . . None of us can add to or diminish the glory of her of whom we have no revealed knowledge.” President Hinckley explained in the same address that, because of the Savior’s instructions and example, one does not pray to Heavenly Mother.

While President Hinckley affirms a belief in Heavenly Mother, his comments distance us from her. If prayer is our method of communicating with the divine, we are instructed not to contact our Mother in Heaven. President Hinckley does not address the fact that mainstream Christianity has never accepted a Heavenly Mother and that may have a been a factor in the recording of scripture.

And so it seems that Heavenly Mother plays no motherly nurturing role in our lives. The role of nurturing is exclusively for Heavenly Father. And so Heavenly Mother is reduced to a divine body that produces spirit children but does not nurture them. This seems opposed to The Family: A Proclamation to the World, which states that “Mothers are primarily responsible for the nurture of their children”.

Somewhere in our motherhood-pedestalling and hushed tones, we’ve haven’t realized or perhaps we’ve forgotten that Heavenly Mother is a woman’s ultimate exemplar. But we know her only for what her body can do. We do not know how to be like her because we do not know her and we’re not supposed to communicate. Heavenly Mother stands on the ultimate pedestal that no one sees. Powerless and praiseless, she is isolated from her children. This doesn’t sit well with me or integrate with the idea of close eternal families.

Heavenly Mother is supposed to be divine. I don’t believe in quoting from dictionaries, but I think that we all understand that the gist of the word is about godhood. Standard attributes of God include being all-knowing, all-powerful, and all-seeing. Joseph Smith did not identify Heavenly Mother as belonging in the godhead, but I see her as having all of the same attributes as Heavenly Father. If we teach that men and women have the opportunity to become like Heavenly Father, then Heavenly Father and Heavenly Mother must share a lot in common.

The Family: A Proclamation to the World says that “All human beings—male and female—are created in the image of God. Each is a beloved spirit son or daughter of heavenly parents, and, as such, each has a divine nature and destiny.” As it says “each has a divine destiny”, I’m going to argue that Heavenly Mother is also divine – not much of a stretch. And as a divine being, she probably also has the standard attributes of being all-knowing, all-powerful, and all-seeing, just like Heavenly Father.

I also imagine that she communicates with us through promptings and hears our prayers, a few of the perks of being all-knowing and all-seeing. But what about all-powerful? What power does heavenly Mother hold? Heavenly Father holds the priesthood, which President Monson defined, as recently as 2012, as the power of God. I want to propose that Heavenly Mother holds this same power, though some would argue for a priestesshood rather than the priesthood.

I feel that the eternal spouse of Heavenly Father must hold the same level of power. The Paulsen and Pulido article reference a variety of names that Church leaders have used for Heavenly Mother, all of which affirm her as a part of God: “Mother God, God Mother, God the Mother, God their Eternal Mother, and Eternal Mother”. If she is divine and part of God, she must hold the power of God. The Young Women’s value “Divine Nature” certainly emphasizes that women have divine nature and divine potential. It seems difficult to me to separate divinity from the priesthood. This leads me to think that exalted women will also hold the priesthood in the next life and the temple seems to suggest this too.

The temple also suggests that women are to be subservient to men because of Eve’s actions in the Garden of Eden. While the Article of Faith states that “men will be punished for their own sins and not for Adam’s transgressions”, women are punished for Eve’s. It seems like some have extended this mortal condition to the heavenly realm, where Heavenly Mother is also limited in her power because of Eve. This doesn’t make any sense. Our emphasis on the eternal nature of gender and, at the same time, silence surrounding Heavenly Mother breeds confusion. If we want to have a better understanding of the eternal roles of both men and women, we need to move beyond the beautiful, but simple, idea that Heavenly Mother exists and move toward a deeper understanding of her. I hope that in the future there will be some clarification on these issues.

Nancy Ross is an assistant professor in art history at Dixie State University. She's blogging the Book of Mormon chapter by chapter at nickelonthenacle.blogspot.com

All posts by Nancy Ross