By Goddess, I Will Not Be Left Behind! 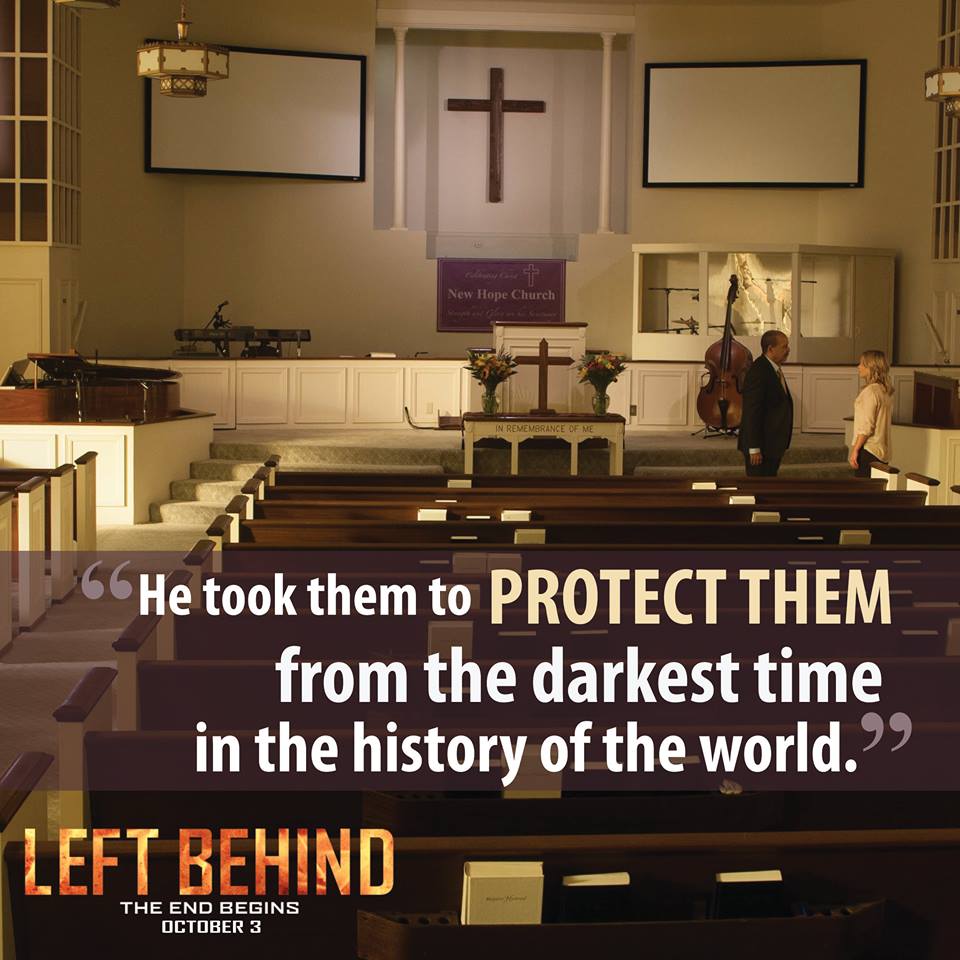 Recently I found out that Nicholas Cage will be starring in the remake of Left Behind to be released in theatres this October. This came as a total shock to me, considering what a great actor he is. I was equally appalled that he would even consider taking part in a B-grade evangelical film about – of all things, the Rapture? He does not strike me as a believer in this doctrine.

The Rapture is the belief that Jesus Christ will return and take all the “true Christians” to heaven in a “secret Rapture” while everyone else will be left behind to suffer through the Great Tribulation. It belongs in a theological category called Premillennial Dispensationalism which divides the ages of humankind into seven key dispensations. At the moment, we are in the dispensation of Grace, or the Church Age. The next dispensation will be set off by the Rapture, which will usher in the Great Tribulation prophesied in Revelation when the Antichrist will reign supreme over all the earth.

Many Mormons can consider themselves lucky to have never heard about “the Rapture,” but as an ex-evangelical who grew up tortured by this belief, I have a firm testimony of this destructive theology. I was just entering middle school when I first heard about the Rapture in the form of a four part video series called A Thief in the Night – which made the Left Behind series look like a Stake single’s dance. For me this film series, along with the corresponding doctrines, created issues of divine abandonment –and understandably so. In these films Jesus is presented as a divine tyrant who can save and condemn at will. I was thoroughly convinced I would be one of the ones “left behind” by the very Jesus who was supposed to be my Savior. I thought I would wake up one morning and find everyone gone- including my parents!

The Jesus I now know and love would not do something like that to one of God’s children. And neither would our Divine Parents. In fact, I will go as far to guess that if I had been raised with a belief in Heavenly Mother, I do not believe I would have suffered through those intense fears of divine abandonment. There would be no need for fear because I would be secure in the love of a Divine Mother. With a loving Mother in Heaven, there would be no fear of being “left behind” by Her beloved Son. She simply wouldn’t let it happen!

And perhaps if the evangelical churches opened their hearts to Heavenly Mother, this destructive doctrine would cease to exist, or perhaps historically speaking, had the evangelical community embraced Her earlier on, there would be no need for this belief as it is currently accepted in those theological circles. After all, the Queen of Heaven is mentioned in Revelation 12:1 right before the Antichrist even makes his debut in chapter 13. – How in the world could so many Christians miss this? –

Revelation 12:1 “And there appeared a great wonder in heaven; a woman clothed with the sun, and the moon under her feet, and upon her head a crown of twelve stars.” (representing the twelve tribes of Israel)

That’s my theory anyway. But then again, I do not believe the Rapture is substantiated by Scripture. It’s nothing more than a couple of random verses grossly taken out of context. But that is an argument for a whole other time.

But here’s something even more interesting – it seems to me Heavenly Mother already serves that same protective function the Rapture seems to fulfill for so many people. Her job is to be a refuge to Her children. God is described in the Gospels as a mother hen gathering her children in time of great peril, “O Jerusalem, Jerusalem, thou that killest the prophets, and stonest them which are sent unto thee, how often would I have gathered my children together, even as a hen gathereth her children under her wings, and ye would not! Behold your house is left unto desolate.” (Matthew 23: 37-38; compare also with 3 Nephi 10: 4-7 for Mormons). Does this not describe, at least on some levels, what many believe to be the Rapture when all the “righteous” are gathered together and taken to heaven to be with Jesus?

Have evangelicals created the erroneous Rapture doctrine in the absence of Heavenly Mother because they are looking for shelter from the storm? If so, it is due to our lack of a belief in Heavenly Mother that our spiritual houses are left desolate. No wonder this doctrine causes such confusion among Christians!

The Rapture does nothing more than reflect- and reinforce- our fears of divine abandonment. But it does not have to be that way.