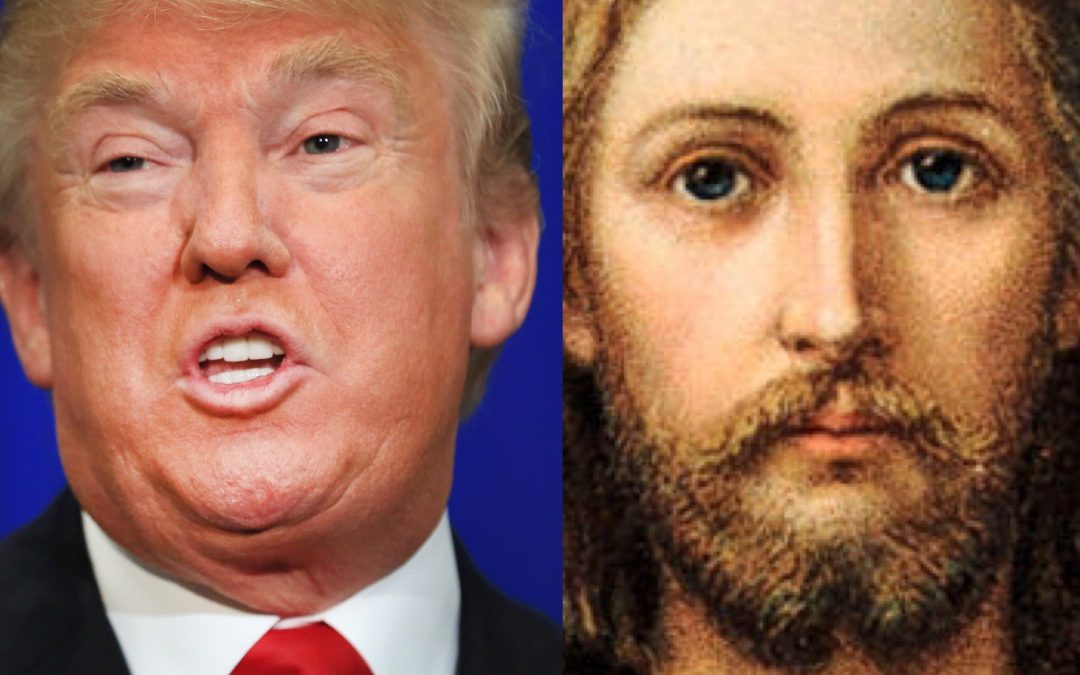 I, the Lord, will forgive whom I will forgive, but of you it is required to forgive all men.
Doctrine and Covenants 64:10

Yesterday I began seeing Mormon and non-Mormon Christians ask us to forgive Donald Trump for what we saw on a video of him recorded eleven years ago. The following day after the video was released Mr. Trump said the following:

“I’ve never said I’m a perfect person, nor pretended to be someone that I’m not. I’ve said and done things I regret, and the words released today on this more than a decade-old video are one of them. Anyone who knows me knows these words don’t reflect who I am. I said it, I was wrong, and I apologize…I’ve said some foolish things, but there’s a big difference between the words and actions of other people.” 1

On Sunday night’s Presidential Debate, Mr. Trump said the following with regards to the video:

“Mine are words, and his [Bill Clinton] was action…So don’t tell me about words. I am absolutely — I apologize for those words. But it is things that people say.” 2

In the call for forgiveness, I have seen Christians parrot the same things Mr. Trump said – “These were just words.” But was it? Here is what he said to Billy Bush on the released video when Billy was working for Access Hollywood:

“I moved on her [Nancy O’Dell, Access Hollywood co-host], actually. You know, she was down on Palm Beach. I moved on her, and I failed. I’ll admit it… I did try and fuck her. She was married..I moved on her like a bitch. But I couldn’t get there… I just start kissing them [beautiful women]. It’s like a magnet. Just kiss. I don’t even wait. And when you’re a star, they let you do it. You can do anything…Grab ’em by the pussy. You can do anything.”3

Do these sound like just words as Mr. Trump and his Christian supporters have claimed? “I moved on her like a bitch..I did try to fuck her…Grab ’em by the pussy.”  No. These are not just words. These are actions that constitute sexual assault.

The Gospel of Matthew

Yesterday morning my fourteen year old daughter and I were studying Matthew Chapter 15 for our early morning scripture study. Verses 10-20 leapt out at the page:

10 ¶And he called the multitude, and said unto them, Hear, and understand:

17 Do not ye yet understand, that whatsoever entereth in at the mouth goeth into the belly, and is cast out into the draught?

18 But those things which proceed out of the mouth come forth from the heart; and they defile the man.

20 These are the things which defile a man: but to eat with unwashen hands defileth not a man. 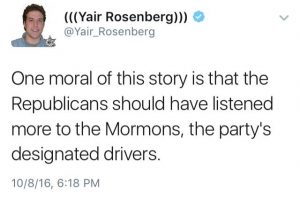 You see, many of us are not shocked. This is the Donald that we have been warning and telling everyone about. This is the Donald that Mitt Romney warned us about. For many of us the video only confirmed what we already knew. Even if what he said were “just words,” Jesus seems to have a different perspective than Mr. Trump and some of his Christian supporters. Even if these were “just words,” his words reveal who he truly is – a defiled man.

But they weren’t just words. They were actions. “I moved on her like a bitch..I did try to fuck her..Grab ’em by the pussy.” He sexually assaulted Ms. O’Dell and possibly other women (something he denied in the second Presidential Debate). 4 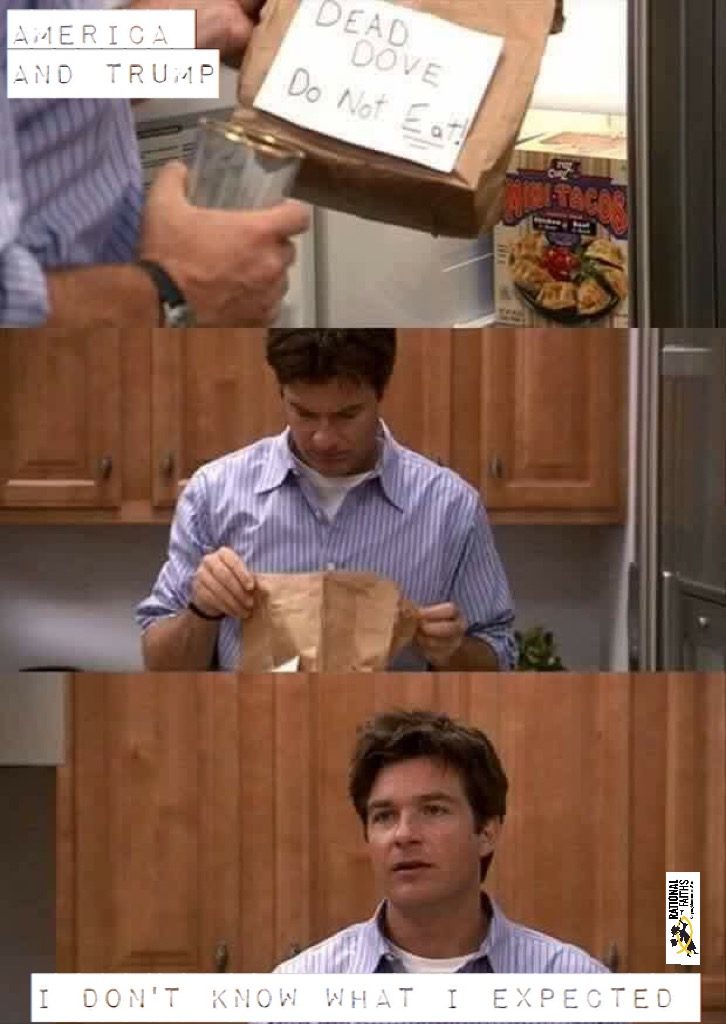 Last week as my fourteen year old and I were studying Matthew Chapter 7  we had a very insightful discussion regarding verses 1-5:

1 Judge not, that ye be not judged.

2 For with what judgment ye judge, ye shall be judged: and with what measure ye mete, it shall be measured to you again.

3 And why beholdest thou the mote that is in thy brother’s eye, but considerest not the beam that is in thine own eye?

4 Or how wilt thou say to thy brother, Let me pull out the mote out of thine eye; and, behold, a beam is in thine own eye?

5 Thou hypocrite, first cast out the beam out of thine own eye; and then shalt thou see clearly to cast out the mote out of thy brother’s eye.

Her answer was perfect. “If what the person is saying or doing harms another person, we have the right to judge their behavior and actions. We have to say or do something.”

I agree with my fourteen year old daughter. So do any of us, who are imperfect, have the right to judge Mr. Trump’s statements and actions? The answer is yes. Because his words hurt others. Because his actions constitute sexual assault. 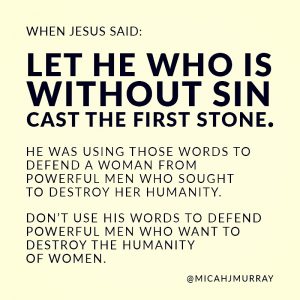 Should I Forgive Trump?

Should I forgive Mr. Trump? After all, Doctrine and Covenants 64:10 tell us that we must forgive all men. Before answering that question, lets look closer at Mr. Trump’s apologies from last Saturday and from Sunday’s debate.

“Anyone who knows me knows these words don’t reflect who I am. I said it, I was wrong and I apologize.”

Mr. Trump does not need my forgiveness. I am not the one he tried to sexually assault. And so I will not forgive him. But what will I do?

Sexual assault is the fault of men. Men do it and men brag about it. Too many men don’t speak out when they hear other men talking about sexual assault in a braggadocios way. Too many of us men are silent. We must speak up and condemn this behavior. What is my work? What will I do?

I will speak up.

I will speak out.

I will speak loud.